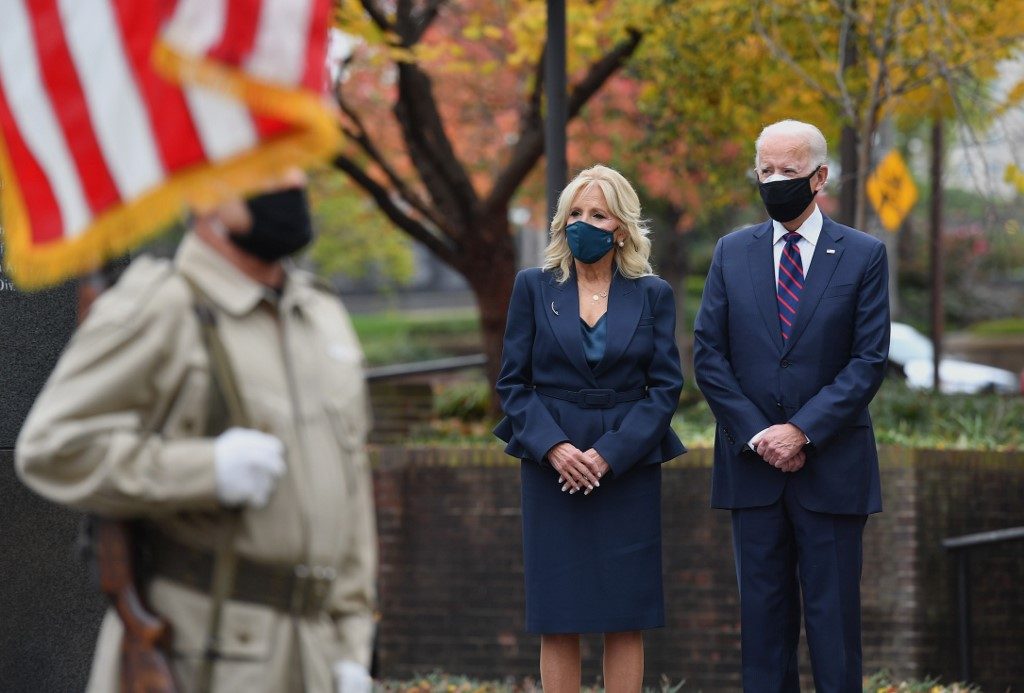 US President-elect Joe Biden and his wife Jill Biden pay their respects during a Veterans Day stop at the Korean War Memorial Park in Philadelphia, Pennsylvania on November 11, 2020.

All 3 men had already congratulated Biden on his recent election victory over Donald Trump, despite the incumbent’s refusal to concede.

Biden’s call with Suga included a stark warning from the Japanese prime minister that the “security situation is increasingly severe” around the region, according to an account of the call from Japanese officials.

Suga’s unusually frank analysis was met with Biden expressing his “deep commitment to the defense of Japan” and to decades-old treaty obligations, according to his transition team.

During the four-year Trump administration, America’s regional allies often questioned whether the mercurial president would uphold long-standing promises to defend them in the event of a military conflagration.

In a move likely to cause protest in Beijing, Biden reportedly confirmed this defense commitment extended to the Senkakus, an uninhabited island chain claimed by both Japan and China which has been a potential flashpoint for decades.

In a separate 14-minute call with Moon, Biden was said to have described the US-South Korea alliance as “the linchpin of security and prosperity” in the region, and vowed to work together on “shared challenges” such as North Korea and climate change.

Trump had publicly mulled withdrawing troops from Japan and South Korea, where more than 20,000 US military personnel are currently stationed to deter any North Korean military action.

South Korea’s presidential Blue House said Moon and Biden had agreed to meet “as soon as possible” after the American’s inauguration.

In his call with Australia’s leader, Biden received an invitation to visit next year for the 70th anniversary of a security treaty between the two countries.

Biden also reportedly noted the importance of “confronting climate change”, which Australia’s conservative government has been notably slow to tackle, despite being party to the Paris climate accord.

Morrison described the call as “very warm” and said Biden did not raise the issue of net-zero carbon targets, focusing instead on “emissions reduction technologies”.

Biden served for decades on the US Senate foreign relations committee – which saw him travel around the world meeting foreign leaders.

He also served as vice president to Barack Obama, who spent much of his presidency promoting America as a “Pacific power”.

Biden is expected to jettison Trump’s combative style, but at almost two decades older than Obama, he comes from a generation of US policymakers that were laser-focused on trans-Atlantic relations during the depths of the Cold War. – Rappler.com