GATES. Security guards stand at the gates of what is officially known as a vocational skills education center in Huocheng County in Xinjiang Uighur Autonomous Region, China September 3, 2018.

The Trump administration has determined that China has committed “genocide and crimes against humanity” by repressing Uighur Muslims in its Xinjiang region, US Secretary of State Mike Pompeo said on Tuesday, in an embarrassing blow to Beijing a day before President-elect Joe Biden is set to take office.

Pompeo said he made the move – which is certain to further strain already frayed ties between the world’s top economies – “after careful examination of the available facts,” accusing the Chinese Communist Party of crimes against humanity against the Uighurs and other Muslim minorities since at least March 2017.

“I believe this genocide is ongoing, and that we are witnessing the systematic attempt to destroy Uighurs by the Chinese party-state,” Pompeo said in a statement.

China has been widely condemned for its complexes in Xinjiang, which it describes as “vocational training centers” to stamp out extremism. It denies accusations of abuse.

The rare American determination follows intensive internal debate after Congress passed legislation on December 27 requiring the US administration to determine within 90 days whether China had committed crimes against humanity or a genocide.

Biden’s nominee for secretary of state, Antony Blinken, told the Senate Foreign Relations Committee during a confirmation hearing on Tuesday he agreed with the genocide declaration. Biden’s Democratic campaign had declared, before the November 3 US election, that genocide was occurring in Xinjiang.

“I think we’re very much in agreement,” Blinken said. “The forcing of men, women, and children into concentration camps; trying to, in effect, re-educate them to be adherents to the ideology of the Chinese Communist Party, all of that speaks to an effort to commit genocide.”

Asked how he would respond in his first 30 days as secretary of state, he replied:

“I think we should be looking at making sure that we are not importing products that are made with forced labor from Xinjiang…. We need to make sure that we’re also not exporting technologies and tools that could be used to further their repression. That’s one place to start.”

China’s embassy in Washington did not immediately respond to a request for comment, but last week it rejected as “lies” a congressional report that said “crimes against humanity – and possibly genocide – are occurring” in Xinjiang.

US-China ties plummeted to their lowest level in decades during Republican President Donald Trump’s administration, and the genocide declaration will ensure an especially difficult start to the Biden administration’s relationship with Beijing.

Daniel Russel, a Biden campaign adviser and a top Asia official under Trump’s predecessor, Democratic President Barack Obama, called Pompeo’s last-minute move “the height of cynicism” and an attempt to lay “a malicious political booby trap” for Biden, who takes the oath of office on Wednesday.

Some critics have questioned Trump’s commitment to the issue after his former national security adviser, John Bolton, accused him of backing China’s construction of the Xinjiang camps. 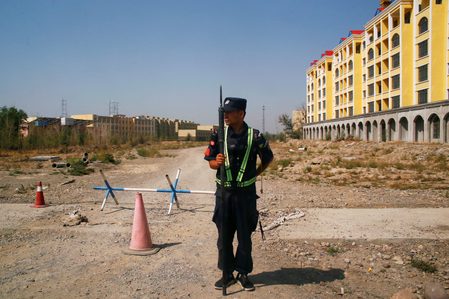 The US decision does not automatically trigger any penalties, but means countries will have to think hard about allowing companies to do business with Xinjiang, a leading global supplier of cotton. Last week, Washington imposed a ban on all cotton and tomato products from Xinjiang.

In his statement, Pompeo called “on all appropriate multilateral and relevant juridical bodies, to join the United States in our effort to promote accountability for those responsible for these atrocities.”

The International Criminal Court can investigate crimes of genocide, war crimes, and crimes against humanity, but China – like the United States – is not a court member, so the situation in Xinjiang would have to be referred by the UN Security Council, where China could veto such a move.

An independent UN human rights panel said in 2018 that it had received credible reports that at least 1 million Uighurs and other Muslims had been detained in Xinjiang. Faith leaders and activists have said crimes against humanity, including genocide, are taking place.

US officials said Pompeo viewed a lot of open-source reporting and evidence before making the declaration, but did not provide specific examples. Pompeo last year referred to a report by German researcher Adrian Zenz that China was using forced sterilization, forced abortion, and coercive family planning against Muslims.

His decision prompted criticism from opponents who described it as a purely political move, citing the Trump administration’s reluctance to make the same determination for atrocities committed against Rohingya Muslims in Myanmar.

Under international law, crimes against humanity are defined as widespread and systematic, whereas the burden of proof for genocide – the intent to destroy part of a population – can be more difficult to prove. – Rappler.com