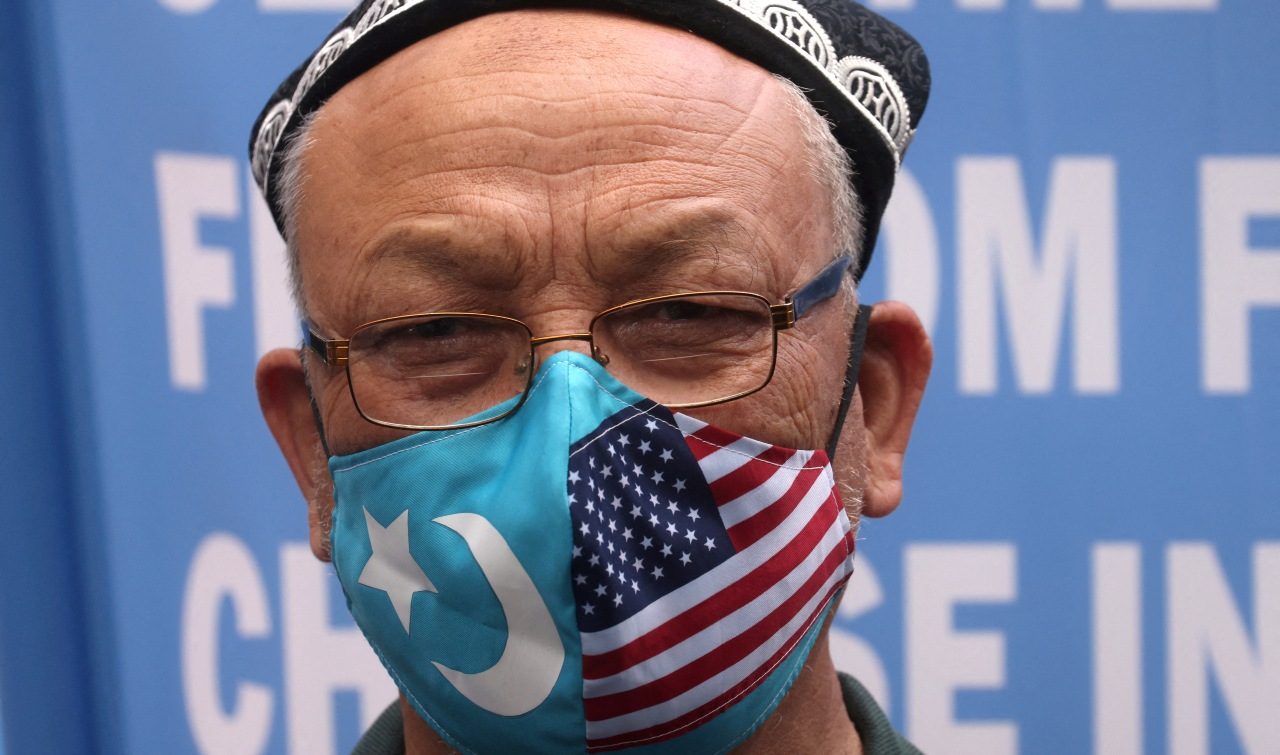 PROBE? In this file photo, Jamal Rehi takes part in a protest in front of the US State Department to commemorate Uyghur Doppa Day and to urge the US and the international community to take action against China's treatment of the Uyghur people in the East Turkestan (Xinjiang) region, in Washington, US, on May 5, 2021.

Facebook Twitter Copy URL
Copied
A so-called tripartite mission, if accepted by the ILO committee, could shine a light on allegations that Uyghurs have been unlawfully detained, mistreated and forced to work. China denies the accusations.

GENEVA, Switzerland – The United States, Britain, and other countries on Thursday, June 2, called for the International Labour Organization to set up a mission to probe alleged labor abuses in China’s Xinjiang and urged Beijing to allow unfettered access.

A committee at the UN agency is addressing China’s compliance with global labor standards after describing its practices in the western region of Xinjiang as discriminatory in February, ILO documents showed.

Thursday’s meeting comes just days after the end of a trip by UN High Commissioner Michelle Bachelet to Xinjiang that has been widely criticized by both civil society and UN member states including the United States.

US Secretary of State Antony Blinken said in March that China “continues to commit genocide and crimes against humanity” against mostly Muslim Uyghurs in Xinjiang.

A so-called tripartite mission, if accepted by the ILO committee, could shine a light on allegations that Uyghurs have been unlawfully detained, mistreated and forced to work. China denies the accusations.

The US ambassador to the UN in Geneva Sheba Crocker called for China to accept the mission to investigate what she described as “systemic violations of labor and human rights.”

Britain’s envoy asked for the trip to be conducted before the next major ILO conference in 2023. Australia, Canada and the European Union also voiced support.

Through a series of virtual interventions, including a Uyghur furnace worker, China argued that its laws, regulations and practices are fully in line with the principles with a Convention on Discrimination it has ratified.

Yu Jiadong, from China’s Ministry of Human Resources and Social Security, accused its critics of turning the meeting into a “political show.”

China in April approved the ratification of two conventions on forced labor but they have not yet submitted the full documentation needed to take effect. This can frequently take weeks or months, an ILO official told Reuters.

Instead, the prospective ILO mission would evaluate China’s practices on the basis of conventions that China has ratified.

Thursday’s committee, made up of government, employer and workers’ delegates, is set to make a decision next week on whether to accept the mission request.

Sending a tripartite mission to China could be a first step towards further action.

As well as a tripartite mission, ILO members also have the option to seek a Commission of Inquiry (COI) to go to China, which would have even more investigative powers.

This requires a formal complaint. Some 35 such complaints have been filed in the ILO’s more than 100-year history, of which less than half have led to COI missions, the ILO official said. In only one case were sanctions applied, against Myanmar in 1998.

China has been a member of the Geneva-based ILO since 1919 and has ratified many of its legally binding conventions. – Rappler.com

What next for UK economy as Boris Johnson quits?