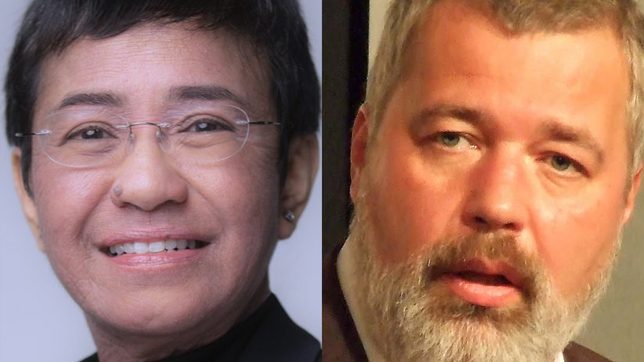 Rappler CEO Maria Ressa and Russian journalist Dmitry Muratov were awarded the Nobel Peace Prize for 2021 on Friday, October 8, in an unprecedented recognition of journalism’s role in today’s world.

Ressa has been the target of attacks for her media organization’s critical coverage of President Rodrigo Duterte’s administration and a key leader in the global fight against disinformation.

Ressa is the first Filipino to win the Nobel Peace Prize.

In the past, two Filipinos were part of international teams that won the Nobel as a group.

Ten Filipinos were with the Organization for the Prohibition of Chemical Weapons that won the prize in 2013, while former Ateneo de Manila University president Father Jett Villarin was part of the Intergovernmental Panel on Climate Change that won in 2007 together with former US vice president Al Gore.

The award-giving body also acknowledged Muratov, one of the founders and the editor-in-chief of the independent newspaper Novaja Gazeta, for his decades of defending “freedom of speech in Russia under increasingly challenging conditions.”

The Norwegian Nobel Committee said the newspaper is “the most independent newspaper in Russia,” publishing critical articles on “corruption, police violence, unlawful arrests, electoral fraud and ‘troll factories,’ to the use of Russian military forces both within and outside Russia.”

The two were awarded “for their courageous fight for freedom of expression” in their countries, Chairwoman Berit Reiss-Andersen of the Norwegian Nobel Committee told a news conference.

“At the same time, they are representatives of all journalists who stand up for this ideal in a world in which democracy and freedom of the press face increasingly adverse conditions,” she added. “Free, independent and fact-based journalism serves to protect against abuse of power, lies and war propaganda.”

Muratov dedicated his award to six contributors to his Novaya Gazeta newspaper who had been murdered for their work exposing human rights violations and corruption.

He is the first Russian to win the Nobel Peace Prize since Soviet leader Mikhail Gorbachev – who himself helped set up Novaya Gazeta with the money he received from winning the award in 1990.

In an interview with Reuters in Manila, Ressa called the prize “a global recognition of the journalist’s role in repairing, fixing our broken world”.

“It’s never been as hard to be journalist as it is today,” said Ressa, a 35-year veteran journalist. She added: “You don’t really know who you are until you are forced to fight for it.”

First for journalists in 86 years

The prize is the first Nobel Peace Prize for journalists since the German Carl von Ossietzky won it in 1935 for revealing his country’s secret post-war rearmament program. “Free, independent and fact-based journalism serves to protect against abuse of power, lies and war propaganda,” the committee said in a press release.

“The Norwegian Nobel Committee is convinced that freedom of expression and freedom of information help to ensure an informed public. These rights are crucial prerequisites for democracy and protect against war and conflict. The award of the Nobel Peace Prize to Maria Ressa and Dmitry Muratov is intended to underscore the importance of protecting and defending these fundamental rights.”

Ressa and Muratov are the latest journalists to be awarded the Nobel Peace Prize, the world’s most prestigious political accolade.

In February, Norwegian labor leader and parliamentary representative Jonas Gahr Støre nominated Ressa, Reporters Without Borders, and the Committee to Protect Journalists for the 2021 Prize.

“She is thus both a symbol and a representative of thousands of journalists around the world. The nomination fulfills key aspects of what is emphasized as peace-promoting in Alfred Nobel’s will. A free and independent press can inform about and help to limit and stop a development that leads to armed conflict and war,” Støre said in his nomination.

Rappler is one of the two verified signatories of IFCN’s Code of Principles in the Philippines – the other being Vera Files.

Rappler is honored – and astounded – by the Nobel Peace Prize Award given to our CEO Maria Ressa. It could not have come at a better time – a time when journalists and the truth are being attacked and undermined. We thank the Nobel for recognizing all journalists both in the Philippines and in the world who continue to shine the light even in the darkest and toughest hours.

Thank you to everyone who has been part of the daily struggle to uphold the truth and who continues to hold the line with us. Congratulations, Maria!

The attacks against Ressa and Rappler have reached the world stage. When Duterte assumed office in 2016 and launched his signature bloody drug war, Rappler cast a harsh light on the extrajudicial killings the President himself encouraged.

In June 2020, Ressa and former researcher Reynaldo Santos Jr. were convicted of cyber libel – a judgment Rappler regards as a failure of justice and democracy. Ressa and Santos are out on bail, and have filed their appeal with the Court of Appeals.

This is one of at least seven active cases pending in court against Rappler as of August 10, 2021.

Award-winning documentary A Thousand Cuts, released in 2020 by Filipino-American filmmaker Ramona Diaz, outlines Rappler’s journey and the fight for press freedom in the country.

Among other numerous awards in her decades of working in journalism, Ressa was named Time Magazine’s 2018 Person of the Year.

Before founding Rappler, she focused on investigating terrorism in Southeast Asia as she reported for CNN’s Manila and Jakarta bureaus.

In Moscow, Nadezhda Prusenkova, a journalist at Novaya Gazeta, told Reuters staff they were surprised and delighted.

“We’re shocked. We didn’t know,” said Prusenkova. “Of course, we’re happy and this is really cool.”

Russian journalists have faced an increasingly difficult environment in recent years, with many being forced to register as agents of foreign states, a designation that invites official paperwork and public contempt.

“We will leverage this prize in the interests of Russian journalism which (the authorities) are now trying to repress,” Muratov told Podyom, a journalism website. “We will try to help people who have been recognized as agents, who are now being treated like dirt and being exiled from the country.”

Reiss-Andersen said the Nobel committee intended the award to send a message about the importance of rigorous journalism at a time when technology has made it easier than ever to spread falsehoods.

“We find that people are manipulated by the press, and … fact-based, high-quality journalism is in fact more and more restricted,” she told Reuters.

It was also was a way to shine a light on the difficult situations for journalists, specifically under the leadership in Russia and the Philippines, she added.

“I don’t have insight in the minds of neither Duterte, nor Putin. But what they will discover is that the attention is directed towards their nations, and where they will have to defend the present situation, and I am curious how they will respond,” Reiss-Andersen told Reuters. The award will give both journalists greater international visibility and may inspire a new generation of journalists, said Dan Smith, director of the Stockholm International Peace Research Institute.

“We normally expect that greater visibility actually means greater protection for the rights and the safety of the individuals concerned,” he told Reuters.

The Nobel Peace Prize will be presented on Dec. 10, the anniversary of the death of Swedish industrialist Alfred Nobel, who founded the awards in his 1895 will. – with a report from Reuters/Rappler.com