Just like everything else, reading has its off days too. If you’re a reader, you might be well aware of the days when you can’t concentrate on a single word on the page.

We all have our own ways of getting over a reading slump. Some people buy even more books. Others take a break from reading altogether. Personally, I prefer reading short stories. If you’ve been following our #RapplerReads pieces for some time now, you might have noticed that I’ve recommended a couple of short story collections. It’s one of my favorite genres to read, especially in the mornings while having my breakfast.

For those of you who are confused, a short story is basically any prose narrative that is shorter than a novel and focuses on a few characters, a linked set of events, and usually one theme. Since each story is self-contained, it’s easier for a reader to focus on it. That’s how it helps me get over my slumps.

[#RapplerReads] To Filipinos who want to go abroad… 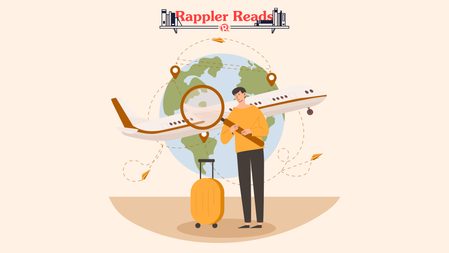 Like most forms of literature, there are many kinds of short stories: flash fiction, drabbles, and fables, to name just a few. But my favorite is the Filipino short story.

The Filipino short story has its roots in the American colonial period, the time English was established as the medium of instruction in all schools. Following this, writers began publishing literary works written in English in the Philippines Free Press, the College Folio, and Philippines Herald. In 1925, Paz Marquez Benitez “Dead Stars” became the first successful short story in English written by a Filipino.

Even during this time, critics already observed that Filipino writers excelled in the field of the short story. Of course, the genre evolved as writers gained more access to other mass media, became more involved in literary workshops and seminars, and participated in literary awards. Because of all these, I believe that the genre has only become even more engaging and superb in recent years.

Are you interested in getting over a reading slump or taking a chance on a new genre? Let me help you get started with this list of Filipino short story books I’ve enjoyed.

If you can only purchase one book on this list, let it be this one. The Likhaan Anthology is probably my best buy from college. Meant to serve as a textbook for a college-level course in Philippine literature in English, it helps readers gain an understanding of the classics in this field.

In this anthology, you can read “Dead Stars” and other masterpieces of the short story genre, such as works by Estrella D. Alfon., N.V.M. Gonzalez, and Cristina Pantoja Hidalgo. It also offers an insightful look into the conventions and growth of the Filipino short story from Jose Y. Dalisay Jr.

Here’s a bonus: you can also get access to works from other genres including poetry, essays, and drama.

Buy it from Fully Booked

Widely considered as one of the best Filipino writers, National Artist Nick Joaquin’s seminal works were first published in the US by Penguin Books. Aside from the titular work, his much-anthologized works “May Day Eve” and “The Summer Solstice” can also be found in this book. This is definitely a must-have not just for all Nick Joaquin enthusiasts but also for enjoyers of Philippine literature.

How to Pacify a Disraught Infant: Stories

If you’re looking for more modern short stories, this would be a good place to start. Written by one of my favorite writers – and former professor – Anna Felicia C. Sanchez, this book is composed of easy-to-read, relatable, and heartwarming pieces on marriage, motherhood, and other issues most Filipinos grapple with.

Allow me to reiterate poet Conchitina Cruz’s review of the book: “​​Sanchez’s clear-eyed and crisp storytelling honors both her fictional women and their real-life counterparts, whose difficulties, though not unfamiliar, are far from obsolete.”

This one’s for all the Marites around. Dedicated to “Sa mga tsismoso’t tsismosa [Those who love to gossip],” Mar Anthony Simon Dela Cruz’ book is a collection of 12 stories written in Filipino. While not everything in the book follows the traditional format of a short story – one story is a forum discussing celebrity Jhake Vargas – each of the works in this book has tsismis [gossip] at its core.

If you’re looking for a fun read or to improve your knowledge of the Filipino language, this may be the book for you.

The Kindness of Birds

When I’m in a more pensive mood, this is the book I read. Merlinda Bobis’ book is for more advanced and emotional readers. It’s a collection of linked short stories, connected by common characters and the symbolism of birds. Published during the pandemic, the stories pay homage to kindness and the kinship between women and nature. I believe that this is a must-read for any woman that finds herself in isolation during difficult times.

This August, join us in celebrating Buwan ng Wika by reading a Filipino short story or two. Don’t forget to post your reads and tag #RapplerReads so we can see them! – Rappler.com