Apr 10, 2020 11:00 PM PHT
Agence France-Presse
Facebook Twitter Copy URL
Copied
As the world deals with the crushing economic impact of the coronavirus pandemic, here is a look back at the Great Depression of the 1930s 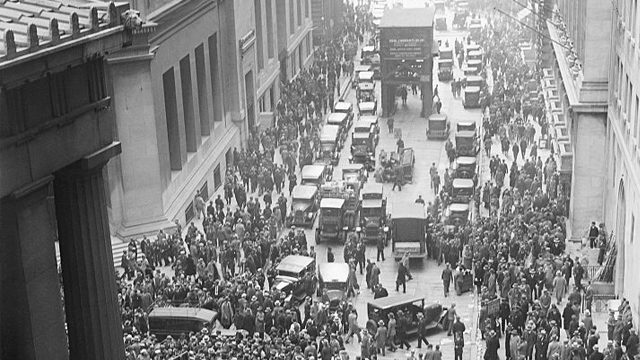 PARIS, France – The Great Depression, whose specter hovers amid the economic turbulence caused by the coronavirus pandemic, started with an unprecedented stock market crash in the United States in 1929.

The October 1929 crash plunged the world into a decade-long economic and financial crisis, which caused years of mass unemployment and misery across capitalist economies.

The depression also saw the rise of fascism in Italy and Germany, where Adolf Hitler was elected in 1933, which heralded the onset of World War II.

The 1929 crisis, symbolized by the Wall Street crash, was caused by a slowdown in American growth, protectionist measures by the main world powers, and tensions in Europe following World War I.

The 1929 crash followed a speculative bubble during which millions of ordinary Americans had been persuaded to buy shares, often in property investments, that turned out to be worthless.

On Thursday, October 24, the New York stock exchange went into free fall as the number of traders seeking to dump the dud shares was so great, and the day became known as “Black Thursday.”

Panic set in and the Dow Jones lost 22.6% of its value over several hours, and thousands of investors were ruined.

Overall, between $7 billion to $9 billion went up in thin air in a single day. The stock exchange collapsed 30% in October and 50% in November. In the following years, it sank even further.

Countless Americans saw most or all of their wealth evaporate.

The “Roaring Twenties,” as the period had come to be called, screeched to an abrupt end.

“Black Thursday” had a domino effect in financial markets around the world, starting with London. Europe was badly hit, as American banks demanded the immediate repayment of loans given for post-World War I reconstruction.

What had started with bad days on the stock markets quickly turned into an intense international economic crisis, the worst the capitalist world has ever seen.

In the spring of 1930, the United States entered recession.

Due to the economic power of the United States, the Great Depression infected the rest of the western economy.

With the United States mired in crisis for nearly 4 years, new Democratic President Franklin D. Roosevelt put forward a “New Deal,” aimed at boosting the economy to counter the collapsing income of farmers, falling prices and industrial production, and unemployment.

The plan had a dual objective: first to remedy the crisis by relaunching consumption and investment, then, in the longer term, reforming the American economic system.

The US in the 1930s adopted policies which cut government spending, encouraged devaluations, and set up protectionist barriers against trade.

Economic stimulus activities put forward by British economist John Maynard Keynes bore fruit and the “New Deal” relaunched the American economy from 1935. However, in 1939 the country still had 9 million unemployed.

Although World War II from 1939 to 1945 devastated large parts of Europe and Asia, post-war reconstruction reversed the economic tide, bringing 3 decades of growth in jobs, trade, and stock markets. – Rappler.com