STRANDED. Hundreds of passengers crowd the NAIA Terminal 1 in Pasay City following the suspension of flights due to technical issues on January 1, 2023.

(With what happened today, we need to fast-track the backup system for our Communications, Navigation and Surveillance Systems for Air Traffic Management system.)

With more than 65,000 passengers already affected by the recent airport technical glitches, Bautista said that the Department of Transportation (DOTr) is already planning for an upgrade to the current air traffic management system. 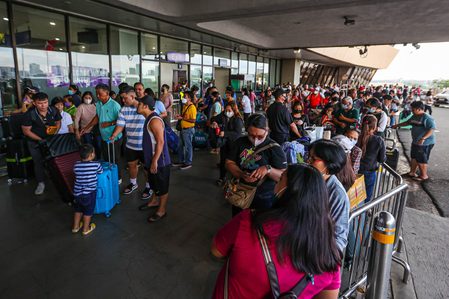 This came on orders from President Ferdinand Marcos Jr. to prepare a proposal for a backup system immediately.

“I mentioned this to the President early this afternoon…. We will need to have a budget for this. Pag-aaralan natin ‘to (We will study this). We will do a feasibility study and present this to NEDA,” Bautista said, referring to the National Economic and Development Authority.

For the upgrade, Bautista said the government would need a “huge amount of money,” which he estimated may be upward of P13 billion.

“We will need a huge amount of money for this. I was informed that the existing system cost us around P13 billion pesos in 2018, and we borrowed money to finance it through [the Japan International Cooperation Agency],” he said.

“Kung budget siguro (For the budget), it should be more than P13 billion now, considering we had this five years ago.”

With the current systems, Bautista estimated that the Philippines was 10 years behind its peers.

“This is not really an airport issue. This is an air traffic management system issue. If you will compare us with Singapore, for one, malaking difference (there’s a big difference). They are at least 10 years ahead of us,” he said.

“Although it’s a system that was introduced in 2010, na-implement natin ito (we implemented this) in 2018, so parang midlife na itong system na ito na kailangan na talaga natin sigurong iimprove or i-modernize (the system is already in its midlife, so we really need to improve or modernize it). Siguro (Maybe) we can still use it, but we need to upgrade this to a better system.”

Flight suspensions began Sunday morning due to what the Civil Aviation Authority of the Philippines (CAAP) had initially described as “technical issues.”

Bautista explained that at around 9:49 am Sunday, the Air Traffic Management Center – which oversees all flights in Philippine airspace – went down due to a power outage, resulting in the loss of communication, radio, radar, and internet.

“The primary cause identified was a problem with the power supply and the degraded uninterrupted power supply, which had no link to the commercial power, and had to be connected to the other manually. The secondary problem was the power surge due to the power outage, which affected the equipment,” the transport secretary said.

“Dalawa ang power sources natin eh (We have two power sources). We have a primary, which is the commercial, and a standby generator, which is capable of operating the whole system 24/7,” he said.

“Meron itong dalawang [uninterruptible power supplies]. It has two in existence by design. Ang design nito, just in case we have a power failure, or any of the UPS fails, fail-safe, aandar ‘yung isa.”

(We have two uninterruptible power supplies. It has two in existence by design. It’s designed so that just in case we have a power failure, or any of the UPS fails, fail-safe, the other one will work.)

Tamayo said that one of the uninterrupted power supply’s (UPS) blowers failed at about 9:49 am.

“Ang initial na nakitang diperensiya (The initial defect observed), one of the blowers of the UPS conked out. It gave out a warning, tapos umugong, tapos nag-conk out (it buzzed, then it conked out), and that occurred at about 9:49 in the morning,” he said.

“Dapat nga walang problema, UPS nga (We should have had no problem, since it’s a UPS). But for one reason or another, the other UPS did not come online. So troubleshooting had to be done,” he said.

Once the power supply had been connected to the commercial power supply provided by the Manila Electric Company (Meralco) at around 12:19 pm, Tamayo said that a power surge occurred.

“Ang pinakamabigat dito (The worst part was), what was affected was the VSAT, they call it the very small aperture terminal. Dalawa ito eh (There are two of these). The VSAT are located outside the air traffic monitoring equipment system. Ito ‘yung mga nakikita nating mga disc sa labas, ‘yung mga platong malaki (These are the ones that look like disks outside, like big plates). These are the receivers from the satellites for communication, navigation, and all the necessary data that we require.”

Tamayo gave reassurances that normal operations have resumed, but that the destroyed equipment would still need to be replaced.

“As of 7:45 pm, we already have the radar displays, and we were informed that it is 100% operational already. However, we still have to replace the backup system – ‘yung mga equipment na nasira (the equipment that broke down) because of this current. We expect operations to normalize,” he said.

A later statement by Bautista said that 90% of all radar surveillance had been restored by 7:45 pm.

The CAAP confirmed that it had procured new equipment for the power supply, which is expected to arrive within 30 days.

In a statement, Meralco said that it was closely coordinating with the management of the Ninoy Aquino International Airport (NAIA), but that the company’s distribution system had encountered no issues on its end.

“Upon initial analysis, there were no trouble or issues affecting Meralco distribution facilities and no power outage or fluctuation was likewise monitored or reported as far as Meralco’s power lines and facilities are concerned,” the statement read.

Normal operations had resumed while equipment restoration was still ongoing, the DOTr confirmed in a statement.

MIAA General Manager Cesar Chiong said that they expected flights to fully recover within 72 hours. To facilitate this, airport runways will not be closed for the next few days, with flights continuing 24/7.

He also added that most of the flights arriving in and departing from Metro Manila would be “very full.” As of 7:30 pm Sunday, MIAA said that more than 360 flights have been affected.

The DOTr said that it was already coordinating with related agencies to ensure all affected passengers receive food, refreshments, care kits, and accommodations. The LTFRB also deployed 10 buses to transport stranded passengers from NAIA to other transit hubs. – Rappler.com