PRICES. An array of vegetables sold at a public market.

MANILA, Philippines – Economists warned that prices of goods in the Philippines may rise to unforeseen levels in 2022, as tensions between Russia and Ukraine send oil prices soaring.

Global oil prices jumped to new seven-year highs, reaching $100 per barrel in some markets due to the geopolitical conflict.

Russia is a major oil producer and among the biggest suppliers of natural gas for Europe.

The Bangko Sentral ng Pilipinas (BSP) has identified $110 per barrel as a potential tipping point.

The BSP earlier raised its inflation forecast for 2022 to 3.7% from 3.4%, before tensions escalated. Now, higher energy prices may further cause a domino effect and put depreciation pressure on the Philippine peso.

“We had expected BSP to hike [interest rates] by the end of [the second quarter] but should this Russia-Ukraine conflict devolve further, we could see the ghosts of 2018 come back to haunt us,” said ING Bank Manila senior economist Nicholas Mapa on Thursday, February 24. 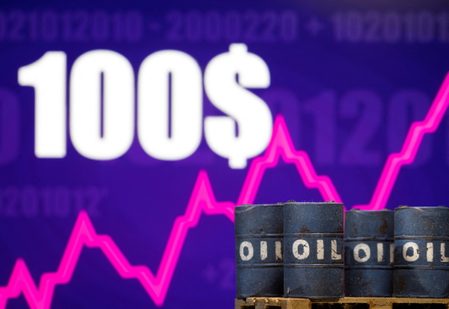 Rizal Commercial Banking Corporation chief economist Michael Ricafort said higher inflation “would slow down the economic recovery amid the reduction in the purchasing power or disposable income” as Filipinos pay more for oil as well as affected goods and services.

Ricafort also noted that the peso has weakened in recent weeks against the US dollar, partly due to higher global oil prices that led to costlier oil imports.

“However, the peso exchange rate has been relatively stable recently,” Ricafort said.

The peso closed at P51.1 against the US dollar on Thursday.

For the Philippines to shield itself from global oil spikes, Ricafort said the country must shift to renewable power sources.

The conflict between Russia and Ukraine has also indirectly affected Philippine shares.

The Philippine Stock Exchange index dropped 2% on Thursday, while the broader all shares index fell 1.9%.

Regina Capital’s Luis Limlingan said the sell-off was due to reports of “cyberattacks on several Ukrainian state websites.”

“The possibility of the Fed raising interest rates as early as March amid the record-high inflation is also a source of concern for investors,” added Limlingan.