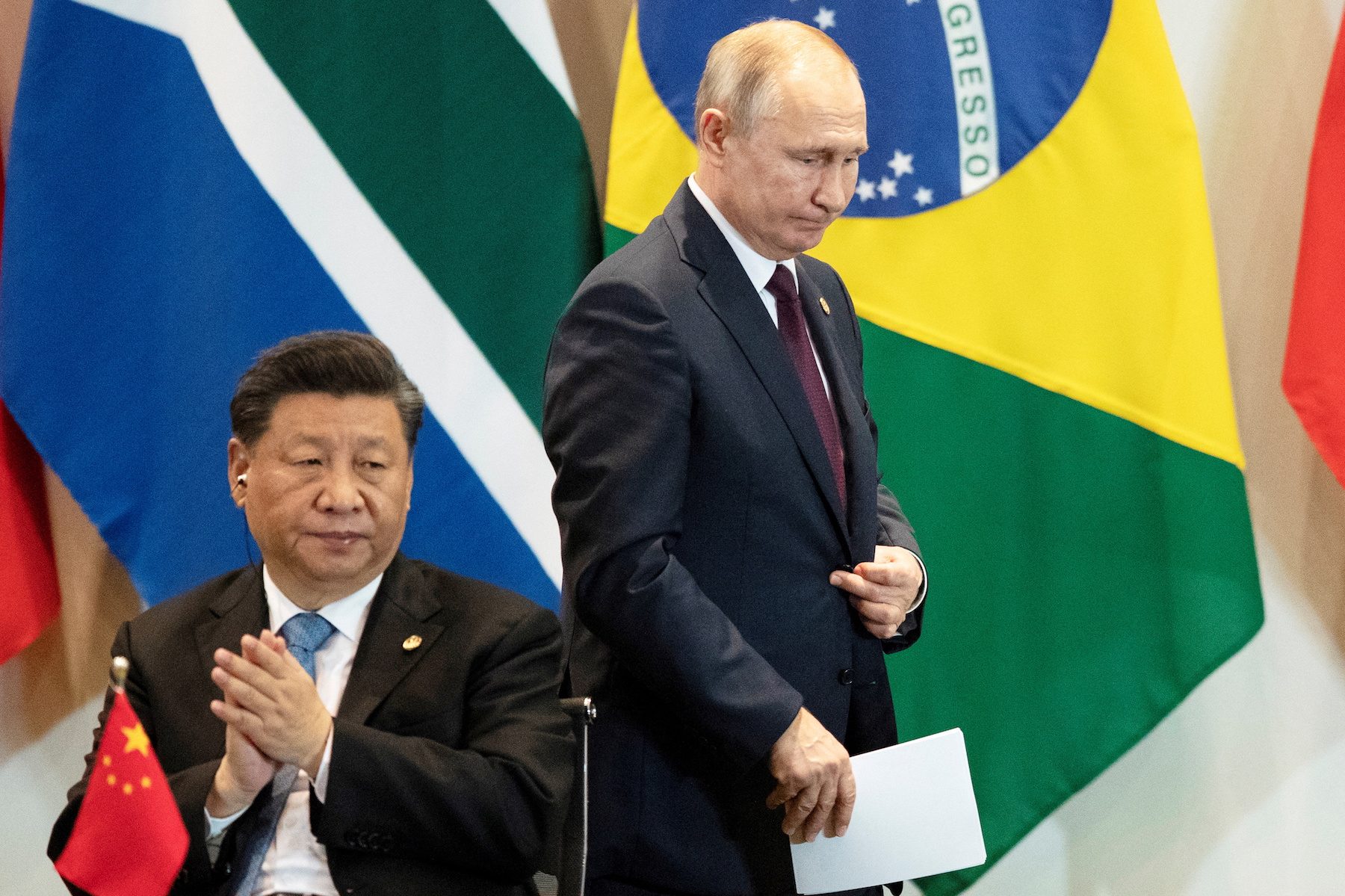 SHANGHAI, China – As western governments ratchet up sanctions against Russia over its invasion of Ukraine, Moscow’s emerging market allies are exploring channels for trade and financing to continue.

The other members of the erstwhile BRICs group – Brazil, India, and China – are treading cautiously for fear of tripping on the sanctions, but the beginnings of a parallel financial system centered on Beijing are becoming detectable.

The United States and Europe have banished big Russian banks from the main global payments system SWIFT and announced other measures to limit Moscow’s use of a $640-billion war chest.

So the willingness of the emerging market giants to sustain business relations with Russia highlights a deep rift over Europe’s biggest crisis since World War II, and threatens to chip away the dominance of the US dollar in global trade.

Chinese businesses and banks are now scrambling for ways to limit the impact of sanctions on their relations with Russia, with settlement of transactions in yuan seen rising at the expense of the dollar. The western curbs, which aim to cut Russia out of the global financial system, could also deepen commercial links between Moscow and Beijing.

In India, as concerns mount over sustaining supplies of Russian fertilizer, government and banking sources say there is a plan to get Russian banks and companies to open rupee accounts with a few state-run banks for trade settlement as part of a barter system.

Brazil’s President Jair Bolsonaro said his country will remain neutral in the conflict.

Deng Kaiyun, who heads Zhejiang’s chamber of commerce that represents Chinese private businesses that trade with Russia, said doing transactions without SWIFT was not a big issue, as the two countries both started de-dollarization five years ago.

“Yuan-rouble settlement has become a normal business at major banks nowadays…. We business people are already accustomed to that,” Deng said, adding yuan is increasingly popular with Russians.

The sanctions are prodding Russian and Chinese companies to open accounts at Chinese banks that have subsidiaries in Russia, said a Moscow-based lawyer who represents Chinese businesses.

“SWIFT is not the only payment system. If you block this channel, business people need to find alternatives,” said the lawyer, who declined to be named due to sensitivity of the topic.

A source at a Chinese state bank who declined to be identified says “exporters are now in favor of using yuan to settle their payments” with Russia. Some of those trades were settled in euros or dollars until last week.

A source at another state lender said that, given a lack of details in the Western sanctions, the bank is closely monitoring the situation while encouraging clients to use yuan in trade settlements with Russia.

Yuan settlements already accounted for 28% of Chinese exports to Russia in the first half of 2021, compared with just 2% in 2013, as both China and Russia step up efforts to reduce reliance on the dollar, while developing their own respective, cross-border payment systems.

The current crisis could accelerate the trend.

Dang Congyu, analyst at Founder Securities, writes the SWIFT sanctions against Russia are “a milestone event that will accelerate the process of de-dollarization.”

“Although it’s hard to replace SWIFT in the short term, this incident is very beneficial to yuan’s globalization over the long run.”

Efforts on de-dollarization are not limited to trade.

Investment firm Caderus Capital said it has been working to promote cross-border investment between Russia and China.

“If we talk about trade and investment, it makes a lot of sense for both countries not to trade in US dollars, because then you have double conversion, in addition to other difficulties recently,” Akopian said.

But the pain for many Chinese businesses is immediate, with a volatile rouble and trade contracts not being honored.

“Everyone is focused on maintaining or cutting existing business right now. No one is talking about new business. That’s what I’m hearing from all quarters, including Chinese clients,” said a lawyer who declined to be named.

Han-Shen Lin, senior advisor The Asia Group and an ex-banker, also cautions that Chinese banks could face tougher scrutiny in the face of western sanctions against Russia.

“All the Chinese banks know that the US dollar clearing global banks will be asking Chinese banks about involvement in sanctions-related counterparts transactions,” Lin said.

“What will be of interest is how Chinese banks can segregate the sanctioned transactions versus non-sanctioned,” such as energy-related businesses. – Rappler.com