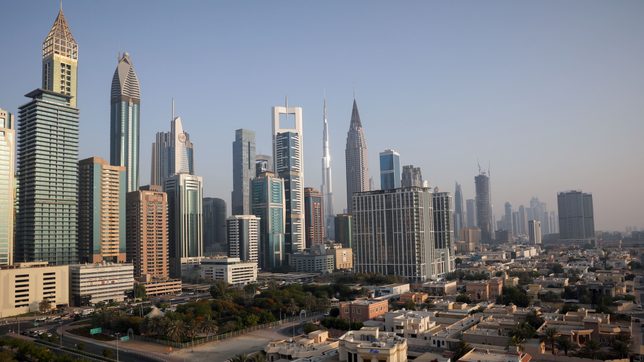 DUBAI SKYLINE. A general view of the Burj Khalifa and the downtown skyline in Dubai, United Arab Emirates, June 12, 2021.

Facebook Twitter Copy URL
Copied
'Due to limited ability to move funds and goods during the pandemic, illicit actors are turning to e-commerce as a money laundering tool,' says the United Arab Emirates central bank

The United Arab Emirates central bank sees increased risks of illicit financial flows emerging from the COVID-19 pandemic, including money laundering and terrorism financing, it said in a report published on Sunday, September 19.

The use of unlicensed money service providers for money laundering has increased during the coronavirus crisis last year, the report said, as well as the use of e-commerce to launder money.

“Widespread lockdowns have resulted in a significant surge in e-commerce. Due to limited ability to move funds and goods during the pandemic, illicit actors are turning to e-commerce as a money laundering tool,” it said.

The number of so-called “money mules” – people who receive illicit funds into their bank accounts to hold or withdraw and wire elsewhere, taking a commission for their services – increased, the bank said, with accounts in the majority of cases belonging to low-income individuals from Africa and Asia.

The bank identified fraud risks linked to the pandemic such as companies or individuals submitting false claims to qualify for government stimulus support measures.

“As we continue to monitor and learn more about the spread of COVID-19 in our communities, we have recently observed heightened external fraud threat, especially with cybercriminals exploiting both traditional and digital channels, to remotely perpetrate cyber-enabled fraud attacks at scale in a rapidly evolving environment,” the bank also said.

The report comes as the central bank steps up efforts to combat illicit financial flows.

The Financial Action Task Force, an intergovernmental anti-money laundering monitor, said last year that “fundamental and major improvements” were needed to avoid it placing the UAE on its “grey list” of countries under increased monitoring. – Rappler.com