The Philippines’ main gateway blacked out after a power outage jolted its air traffic control on New Year’s Day, January 1, leaving at least 65,000 passengers stranded and disrupting some 300 flights.

Flight cancellations led to a domino effect, adversely impacting business and exposing vulnerabilities in the country’s national security systems. Talks of privatization have also resurfaced amid the government’s mess.

Bookmark this page for updates and analysis as lawmakers and government agencies probe the New Year’s Day incident.

Nine departure flights were held at a NAIA taxiway and 38 flights waited for clearance delivery early on Chinese New Year, January 22, as the Civil Aviation Authority of the Philippines (CAAP) conducted maintenance on equipment that powered its air traffic system, which had shut down Philippine airspace just weeks ago.

“The maintenance activity involved the replacement of the blowing/cooling fan for the second uninterruptible power supply (UPS) that is being used to power the Communications, Navigation, and Surveillance / Air Traffic Management (CNS/ATM) System housed at the ATMC,” CAAP said in a statement.

For context, a UPS with a faulty cooling fan was initially determined to have caused the air traffic fiasco on New Year’s Day. CAAP later clarified that the UPS unit was still functional, even if its fan needed to be fixed. The maintenance lasted from 4:20 am to 5:23 am. Operations returned to normal at 6:09 am.

MIAA: NAIA to have ‘OFW lounge’

The MIAA gave the update to the House transportation panel, which has invited resource speakers from various government agencies as part of their probe into the shutdown of the Philippine airspace on January 1, stranding tens of thousands of passengers.

“There was a request from one of the members of the committee for us to look into the provision of an OFW lounge. We have met with the Overseas Workers Welfare Administration,” MIAA General Manager Cesar Chiong said. “We’re already in the midst of implementing this project.”

Transportation Undersecretary Bobby Lim told the House transportation panel on Wednesday, January 18, that it would take a few more weeks before authorities get to the bottom of the fiasco that shut down the entire Philippine air space on New Year’s Day.

“Given the glitches that have been experienced worldwide, there is a lot of deeper examination on the cyber threat security to this critical facility of the government,” Lim explained. “There is no conclusive finding yet.”

Transportation Undersecretary Bobby Lim said that a key engineer of the Civil Aviation Authority of the Philippines has taken a leave of absence, in light of the faulty air traffic equipment that shut down the entire Philippine airspace on New Year’s day.

“We have recommended that the head of the CNS/ATM (Communications, Navigation and Surveillance Systems for Air Traffic Management), Mr. Arnold Balucating, take a leave of absence, and he has done so already,” Lim told the House transportation panel, which continued its inquiry into the incident on Wednesday, January 18.

Senators also call out the Civil Aviation Authority of the Philippines for the absence of a CCTV in the equipment room housing critical equipment of its air traffic management system.

Ramos requested for an executive session with the Senate to discuss CICC’s initial findings.

Former Department of Transportation (DOTr) secretary Arthur Tugade attempted to clear allegations that he diverted P13 billion of funds away from the Communications, Navigation and Surveillance Systems for Air Traffic Management (CNS/ATM) systems project for cosmetic programs at the airport.

“Wala hong nadivert pagkat ang project ng CNS/ATM (There was no diversion of funds because the CNS/ATM project) is what we call a loan-funded project,” Tugade said during the joint Senate committee hearing on Thursday, January 12.

He clarified that money for the project was controlled by the Japan International Cooperation Agency (JICA). According to the former secretary, funds for the project were not passed through the DOTr. Instead, JICA released funds directly to contractors.

“Kahigpit-higpit ho ng JICA. Wala ho samin yung pera. May proseso ho diyan kung kailan irerelease… Wala pong pagkakataon o opportunidad man lang na magdivert ka,” said Tugade. (JICA is very strict. We don’t have the money. There’s a process for when it can be released… There’s no chance or even an opportunity for you to divert.)

Here’s the list of guests invited to the joint Senate committee hearing on Thursday, January 12 – all in an effort to shed light on what caused the Philippine air space to shut down on New Year’s Day. 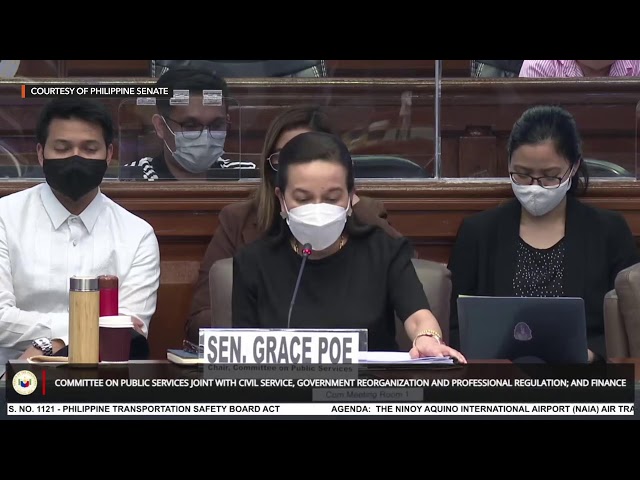 After air traffic and airport officials were grilled at the House, it’s the Senate’s turn to ask questions.

The Senate Committee on Public Service, the Committee on Civil Service, Government Reorganization, and Professional Regulation  and the Committee on Finance are set to hold a joint hearing on the air traffic fiasco at 1:30 pm (Manila time) on Thursday, January 12. The committees are led by Senator Grace Poe, Senator Bong Revilla Jr., and Senator Sonny Angara.

Poe, who will be presiding the hearing, previously said that she believes the Civil Aviation Authority of the Philippines (CAAP) is “almost 100% responsible for this” as it handles the operations of commercial air traffic. An aspect to watch will be how senators hold CAAP liable for what happened, and whether they discuss any proposal to privatize Philippine air traffic control.

In the previous House hearing, the CAAP clarified that the system outage was the result of faulty equipment that they had not anticipated beforehand.