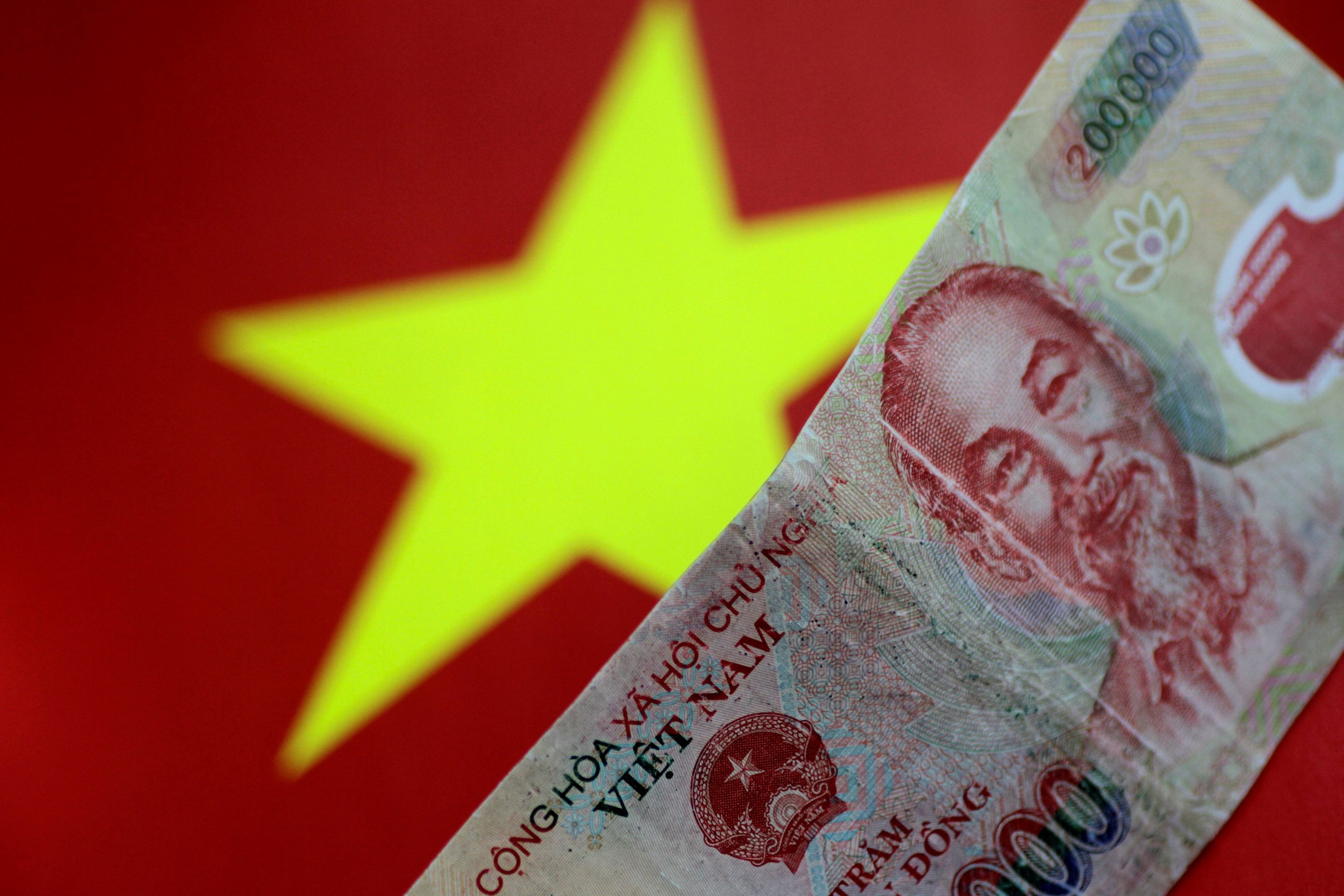 CURRENCY. A Vietnam dong note is seen in this illustration photo, May 31, 2017.

Facebook Twitter Copy URL
Copied
The stakes are high for Vietnam since further interventions after the currency manipulator label could trigger a US response, such as new tariffs on its goods

After being branded a “currency manipulator” by the United States in December for trying to keep the dong from rising in value, Vietnam is again intervening in foreign exchange markets and using what traders say is an unusual method to do so, according to 6 people familiar with the matter and a review of an interbank trading message.

Early in January, the State Bank of Vietnam (SBV) told some local banks it would cease its regular purchase of US dollars in the spot market, where the trade settles within days, according to two senior currency traders and an analyst, who all work at local banks and have direct involvement in the trades.

The central bank offered the local banks an attractive deal instead: It would agree to buy dollars at a favorable rate for delivery in July, and it would allow the local banks to cancel this agreement before mid-June if they wished, according to the 3 sources and a review of trading instructions sent by the SBV for one such transaction.

The new method of intervention, which has not been previously reported, put downward pressure on the dong but without money changing hands right away, which the sources said could help avoid drawing US attention to the trades and any further consequences for bilateral relations.

The SBV did not respond to requests for comment.

There is no suggestion of any wrongdoing by Vietnam. Many central banks intervene regularly in currency markets. Vietnam has consistently said its currency policies aimed to maintain stability and control inflation, not seek trade advantage.

“We do not have anything public to share at this time,” a Treasury official said in an emailed response to Reuters’ queries about Vietnam’s foreign exchange practices.

Vietnam, which has seen a surge in export-led growth as manufacturing of electronics and other goods, has increasingly shifted to the Southeast Asian nation, especially from China after its trade war with Washington.

A higher value of the dong because of its trade surplus could hurt this growth in the middle of a pandemic.

Nguyen Xuan Binh, who is head of research at KB Securities in Hanoi and familiar with the trades but not directly involved with them, said the delayed delivery of dollars meant Vietnam’s central bank could avoid triggering one of the conditions behind the US label: buying dollars in 6 of 12 consecutive months.

It said Vietnam met all the conditions that trigger the currency manipulator designation, including “persistent, one-sided intervention” in the currency market.

The stakes are high for Vietnam since further interventions after the currency manipulator label could trigger a US response, such as new tariffs on its goods. The next US review is slated for April.

Under its January deals, the SBV offered the local banks an above-market rate of 23,125 dong per dollar, according to the 3 sources and written trading messages sent by the central bank. That rate is a premium of about 0.5% on current spot prices.

If the dong were to rise further between January and June, it would increase the premium over spot prices for the banks. And if the dong were to weaken below 23,125, they could then cancel the deal and sell dollars in the spot market instead.

Reuters could not determine the size of the SBV’s intervention, but the 3 traders said it was large enough to create demand for dollars in the market, which put downward pressure on the dong.

The currency’s value in the black market, where the dong is often traded in the real economy, has fallen 1.1% as the traders said dollar supply may have dried up.

SBV’s new transactions resemble financial derivatives known as forwards, which bind parties to exchange currencies at a future date at an agreed upon rate, the 3 sources said.

Forwards contracts offer several advantages to central banks. They do not require cash up-front and can help smooth out sudden shifts in reserves. Indeed, they are popular with other Asian central banks, such as those in India, Taiwan, and South Korea.

But 4 of the people familiar with the transactions said SBV’s agreements were not typical forward contracts, as they gave banks the option to cancel the deal without significant costs.

Two of them said the SBV had offered similar options previously, around 2015, although then it had been selling dollar forwards in order to try and support a sliding value of the dong.

As the SBV previously preferred to use 3-month forward contracts, all 6 sources familiar with the transactions said the shift to a longer time frame suggested a desire to buy time before the intervention drew US attention or pressure.

The SBV did not respond to questions about its approach. – Rappler.com