MANILA, Philippines (3rd UPDATE) – The movie Honor Thy Father (also known as Con Man), has been disqualified from the Best Picture category of the 2015 Metro Manila Film Festival Awards, according to its director, Erik Matti, and producer Ronald “Dondon” Monteverde.

On Saturday night, December 26, Monteverde released a statement to explain the situation.

He said that on Saturday, the MMFF Executive Committee disqualified their film from the category, because they did not disclose that Honor Thy Father participated in the Cinema One Originals Film Festival as the festival’s opening film.

Monteverde said, however, that because Honor Thy Father was a late addition to the MMFF lineup, they had already accepted Cinema One’s invitation when they found out they would be included in the MMFF.

Monteverde said that they informed the MMFF about this through phone and email. According to him, they also complied with MMFF’s request that Cinema One head Ronald Arguelles attest to the fact that the screening did not generate revenue and was by invitation only.

“We complied with all the MMFF’s requirements; we did not commit any non-disclosure of any kind; no MMFF rule was ever violated by Honor Thy Father,” said Monteverde on Facebook.

“I am questioning the reasons, the timing, and the means employed in enforcing this decision by the MMFF Executive Committee,” Monteverde added.

The MMFF Awards are on Sunday, December 27.

Monteverde also questioned why they were disqualified only from the Best Picture category.

Monteverde ended his statement by demanding an investigation. “But if no one would care or bother to investigate, then we simply wish that the moviegoers, the Filipino people would start to question and be more critical of what, year in and year out, is passed off to them as good and true,” he wrote.

Posted by Honor Thy Father on Saturday, 26 December 2015

Prior to Monteverde’s statement, Matti posted on social media a photo of a letter from MMFF overall chairman Emerson Carlos, addressed to Monteverde.

Honor Thy Father was screened on November 8 at Trinoma for the festival. 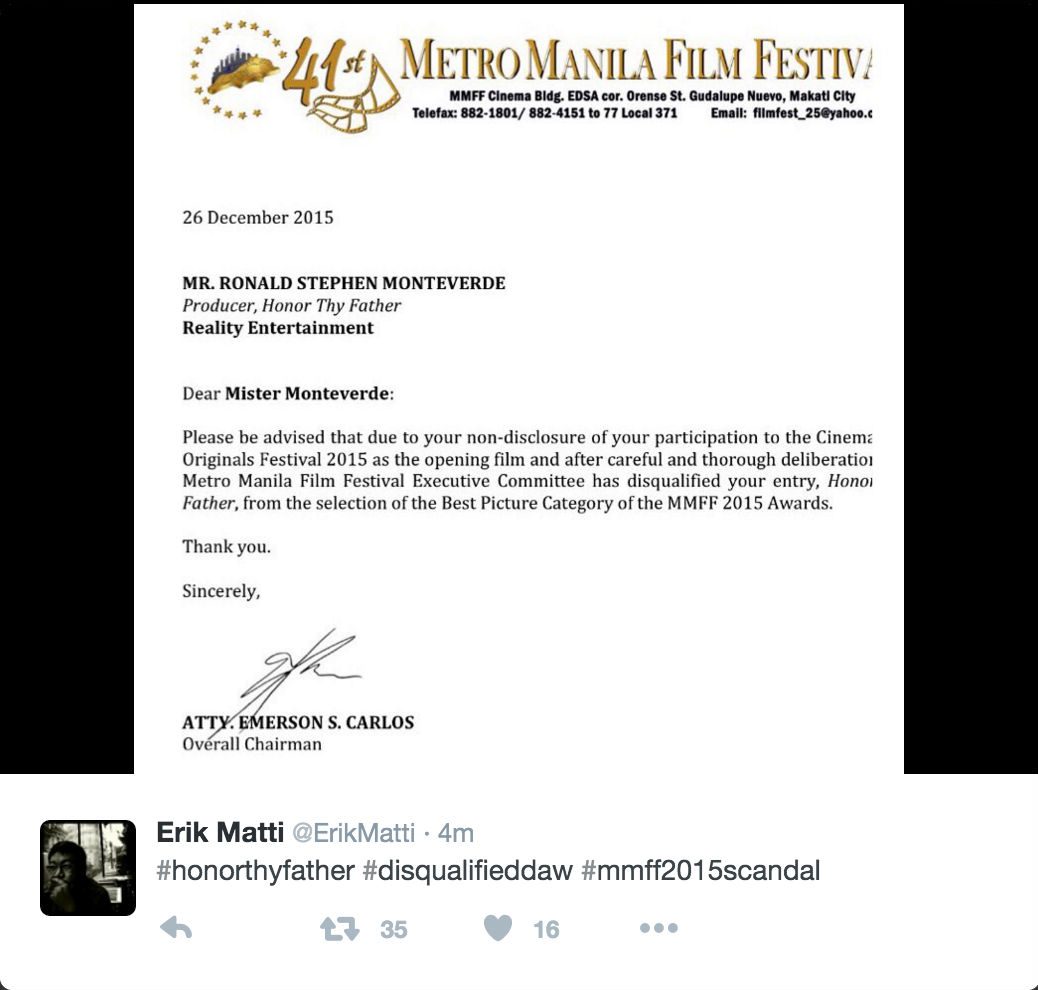 On Facebook, Honor Thy Father writer Michiko Yamamoto posted the same letter, and explained in the comments that the MMFF has a rule that festival entries should not have been commercially shown locally or abroad before the festival.

If the movie is screened prior to the festival – without revenue – the movie can be included in the line-up if the producer gives a sworn statement saying that they didn’t earn anything from the earlier screening.

As proof that they had followed the MMFF’s rules, Matti’s Twitter post had two statements – one from Monteverde’s production company Reality Entertainment and another from Cinema One Originals. The letters were addressed to the MMFF committee and those concerned, and they said that Honor Thy Father did not earn any money from the November screening.

The letter from Reality Entertainment said that the screening had no ticket sales, and was strictly an invitation-only event. It was dated November 5. The other letter, from Cinema One Originals festival director and channel head Ronald Arguilles, echoed Reality Entertainment’s. The letter was dated November 4. 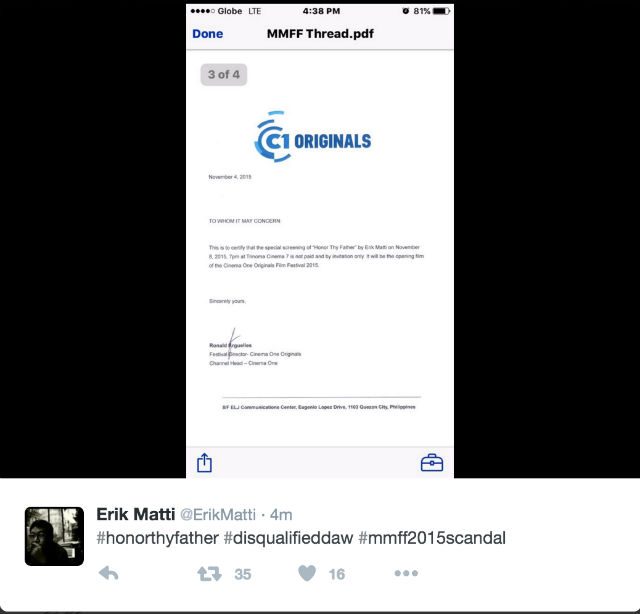 Matti has since deleted his posts.

Pulled out of theaters

The caption on Yamamoto’s Facebook post said that Honor Thy Father was pulled out of 10 theaters in one day. Honor Thy Father, like all the MMFF entries, were released on December 25.

On December 26, Rappler spoke to Nilalang director Pedring Lopez and co-producer Wesley Villarica through Facebook chat. The two said that their movie, also an entry to the MMFF, has been pulled out of theaters since it was released.

“In less than a day [of screening] we started getting pulled out of a few cinemas, and when today’s screening started, from 36 theatres in Manila and 7 provincial theatres we were down to less than 20 [in total],” said Villarica.

He added that the MMFF committee has not explained why their movies were being pulled out, and the same happened to Honor Thy Father: “As far as we all know, it was Honor Thy Father and Nilalang who got the most theaters canceled.”

Lopez and Villarica said that most theaters were filled with two of the bigger productions among the 8 entries: My Bebe Love and Beauty and the Bestie.

Later in the interview, Lopez said, “We expected the two big movies to really dominate the box-office but all our cinemas [are screening] either [the] AlDub or Vice movie. Even direk (director) Erik Matti’s movie has the same problem, and now disqualified pa [siya] (it’s disqualified too).”

My Bebe Love stars the popular tandem of Alden Richards and Maine “Yaya Dub” Mendoza, also known as AlDub. Among the film’s producers are Antonio P Tuviera Entertainment and GMA Films, both of which are under the GMA network.

On the other hand, Beauty and the Bestie stars Coco Martin and Vice Ganda, was produced by ABS-CBN Films, and distributed by its subsidiary, Star Cinema. Both are under the ABS-CBN Corporation.

Both GMA and ABS-CBN are the biggest media companies in the Philippines.

“My friends and I were supposed to book the whole director’s club today in SM Aura to watch the film but when I woke up today it was already replaced by AlDub,” shared Villarica.

Lopez said his friends were supposed to watch on December 26 as well, but they found that the film was already pulled out. “I feel lang na dapat (that) the MMFF should at least protect the small indie [productions],” he added.

Villarica also said that their film should have at least gotten 3 days of screening, especially given that the bigger productions were being screened at more cinemas.

“Kasi (because) we were given nga only 40 plus cinemas compared to the big studios who got more than 60 to 70, then this morning Vice’s movie is already [at] 150 plus. Its crazy. Not everybody wants to go out on Christmas day and line up for a movie,” said Villarica.

Lopez also said that you don’t get to choose which cinemas your movies will screen at – they had to draw lots. “Pero (but) some cinemas I was told we were only given 2 screenings, nung gabi pinalitan na kami (at night, we got switched out).”

When asked what they had to say to the MMFF committee in light of the issue, Villarica responded, “We would like to appeal to the MMFF committee to help support local cinema by ensuring that all entries get ample screening time, and that we believe that we can offer the viewing public an alternative movie that can honestly be at par with international productions. One day is not a gauge of how many people would want to see the movie.”

After Matti deleted his posts, he retweeted reactions to the disqualification.

And how great it was to announce it on a Saturday where there is no office to appeal?! #MMFF2015Scandal Dapat sa Float pa lang DQ na!

Viewer disenfranchisement. That's what it's all about. Funny, GREED is among the central themes that #HonorThyFather so deftly satirized.

Among those Matti retweeted was film critics Philbert Dy and Richard Bolisay.

As far as MMFF is concerned, awards are important because winning translates into money. This is a serious matter. We want HTF to earn more.

Another is Antoinette Jadaone, who directed another MMFF 2015 entry, All You Need is Pag-ibig. She questioned the MMFF committee’s decision, saying, “Sino’ng may pakana? Sino’ng makikinabang? Para sa ikabubuti ba ito ng industriya?” (Who came up with the scheme? Who will benefit from this? Is this for the good of the industry?)

In another tweet, she continued, “Napakahirap na ngang panatilihin ang alab ng puso sa pagpepelikula, mapapatay pa.” (It’s hard enough to maintain the passion for filmmaking, and now it will be killed.)

The movie is about a couple, Edgar (John Lloyd Cruz) and Kaye (Meryll Soriano), who must pay their debt to Kaye’s co-parishioners, because of fear the parishioners would hurt their daughter. – Rappler.com