LOONA’s fans are boycotting the group’s next comeback. Here’s why. 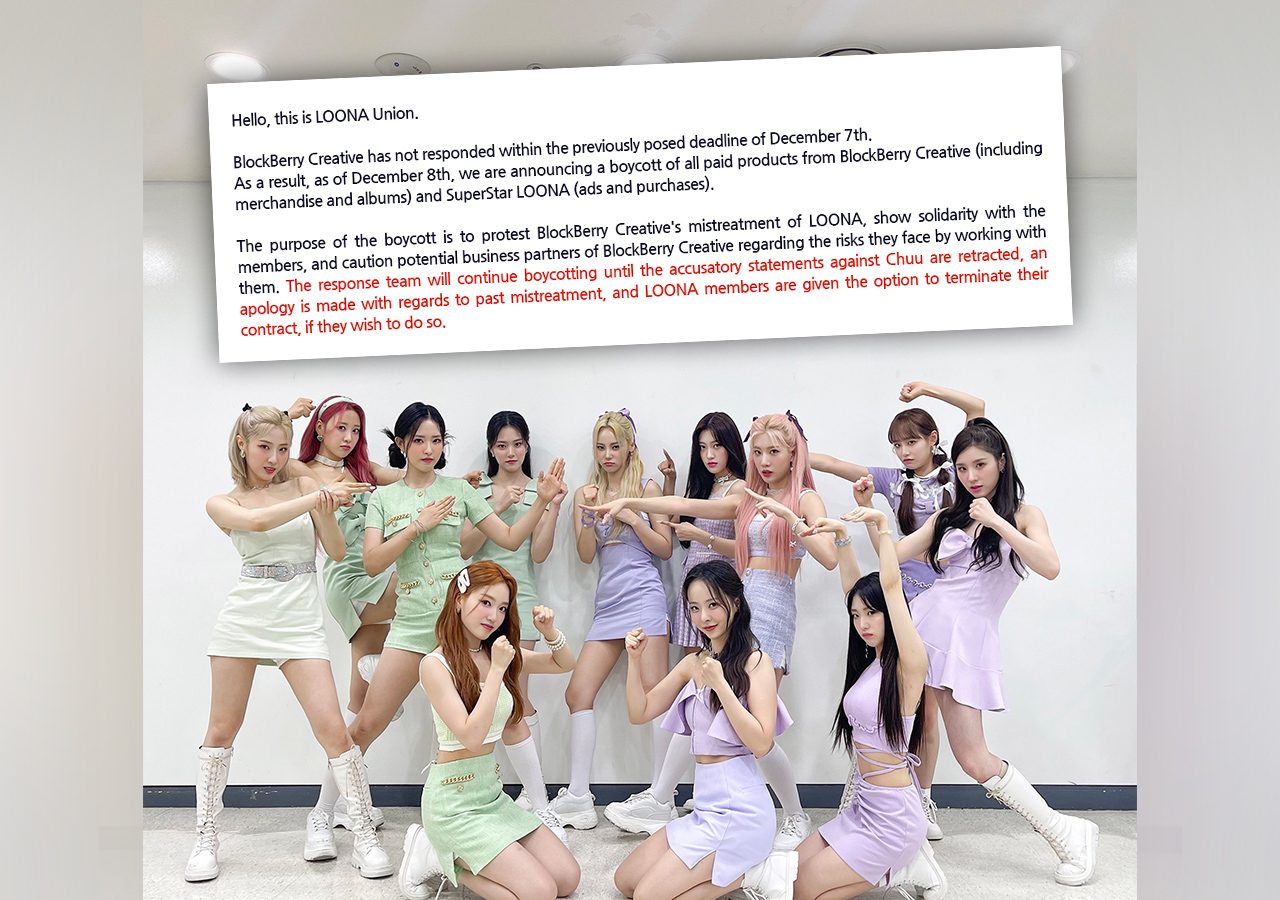 Facebook Twitter Copy URL
Copied
The boycott continues ‘until the accusatory statements against Chuu are retracted, an apology is made with regards to past mistreatment, and LOONA members are given the option to terminate their contract’

Fans usually meet comeback news with excitement, pushing to trend them left and right. But LOONA’s fans, also known as Orbits, are responding differently this time: they’re holding a boycott.

“The purpose of the boycott is to protest BlockBerry Creative’s (LOONA’s agency) mistreatment of LOONA, show solidarity with the members, and caution potential business partners of BlockBerry Creative regarding the risks they face by working with them,” said LOONA Union, a coalition of LOONA fanbases in and outside South Korea.

“The response team will continue boycotting until the accusatory statements against Chuu are retracted, an apology is made with regards to past mistreatment, and LOONA members are given the option to terminate their contract, if they wish to do so,” LOONA Union added.

What led to the boycott?

The said members have noticeably been absent from the group’s social media platforms since the report surfaced. The remaining members, Hyunjin and Vivi, have been active this month.

Earlier, on November 25, former member Chuu was removed from the K-pop group. In their announcement of the expulsion, BlockBerry Creative said that Chuu “verbally abused” the company’s staff.

“I haven’t done anything that would be shameful to my fans,” Chuu said in response.

There were growing rumors of Chuu departing LOONA, which BlockBerry Creative denied in June. Chuu had been absent from most of LOONA’s activities since the group participated in K-pop survival show Queendom 2 and released their latest comeback Flip That.

Chuu was also absent from LOONA’s first world tour, LOONATHEWORLD, and the group’s first performance in the Philippines during Popstival 2022. BlockBerry Creative cited scheduling conflicts for both absences.

Chuu was once the most active member in the group, having been an endorser of various brands and a host or guest in multiple shows in South Korea since 2021. Many Orbits, however, sounded the alarm over concerns of Chuu being potentially overworked.

In December 2021, Chuu reportedly filed — and partially won — a similar injunction to suspend her exclusive contract with BlockBerry Creative.

Orbits raised the same concern about overwork for the other members of LOONA, too. During LOONATHEWORLD, the fans called out the tour’s tight schedule and apparent lack of rest for members between stops.

Some members sat out certain stops during the tour due to health concerns.

On December 5, LOONA Union posted an open letter to BlockBerry Creative, demanding a formal explanation regarding the said issues until the end of December 7, or else they hold a boycott. The agency has not publicly responded to the letter, save for revealing their plans for a LOONA comeback, curiously, on December 7.

In a press release about the January comeback, BlockBerry Creative explained that the concept is set to signify a “fresh start” for the group.

Orbits, and even other K-pop fans, did not have it.

Orbits are urging the public to join the boycott by not purchasing LOONA albums, merchandise, and tickets for paid events such as concerts and fanmeets; not streaming the group’s songs and videos on all platforms; and not patronizing all paid products by BlockBerry Creative.

LOONA is known for K-pop tracks Hi High, Butterfly, Why Not, and Pose. — Rappler.com