In an Instagram post on Monday, July 12, Patch admitted that she got emotional when Hannah was crowned during pageant night Sunday, July 11.

“Last night, one of my closest friends won the Binibining Pilipinas International 2021 crown! Hannah, I don’t know if you saw my message, but I cried backstage because I was so happy for you! I know this has been your dream since 2019,” Patch said.

Hannah first joined the Binibining Pilipinas pageant in 2019 but only made it into the top 15. 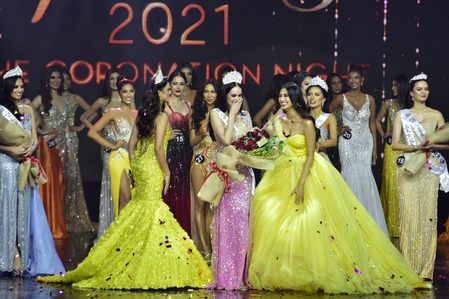 Patch went on to acknowledge Hannah’s efforts and sacrifices for the competition. “You worked so hard, sacrificed so much and improved so tremendously! You were so stunning last night and gave an amazing performance,” she wrote alongside photos of them together over the years, including some moments from their 2019 pageant stint.

“Finally, this is happening for you, I am so excited and I know you will do great in Japan,” Patch concluded in her post.

In the comments section, Hannah replied: “Patchy, I’m going to cry again. I love you so much. It’s an honor to be crowned by you! Oh my gosh, these memories.”

On her Instagram, the newly crowned Bb. Pilipinas International also made a separate tribute post for Patch. “My Binibini sister and friend, I will use my entire mind, body and soul to make sure I continue your legacy,” Hannah said.

Patch finished in the top 8 of the Miss International 2019 competition in Japan.

Hannah will represent the Philippines in the Miss International pageant later this year, hoping to be the seventh Filipina to win the title.  – Rappler.com