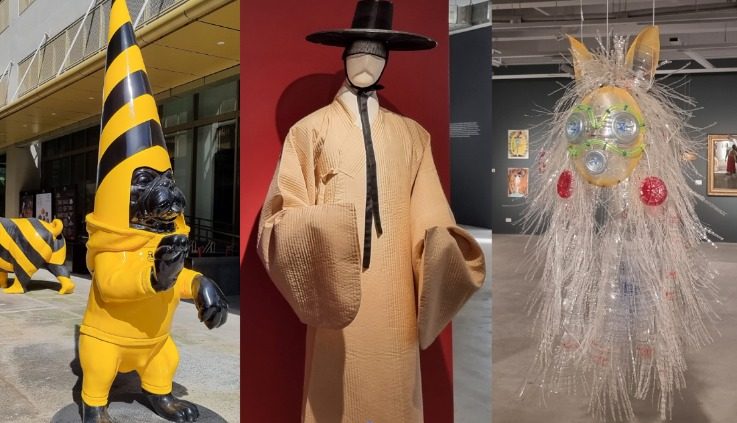 MANILA, Philippines – More than two years have passed since the Metropolitan Museum of Manila began its hiatus amid the pandemic. In those two years, the museum transitioned its activities online, while its on-site venue along Roxas Boulevard, Manila was prematurely closed.

In the second half of 2021, the museum announced its plans to move from its initial 45-year-old venue to a new location in BGC while rebranding itself as “The M.” Corinne Garcia, programs assistant at The M, explained to us the rationale behind the transition.

“We wanted to make the museum more accessible to a wider audience. We want to stick to our philosophy of ‘Art For All’ and moving to a new location was part of that process” she shares.

At the tail end of 2022, the museum is currently previewing its new spaces to those interested, with plans to fully reopen to the public in the first quarter of 2023. At the time of visiting, three exhibitions were open to view: Korea: A Land of Hats, The Hat of the Matter, and Quick Turn on Hyper Highways. We took a look at each one:

Korea: A Land of Hats

Centered around the traditional hat culture of Korea, this exhibit showcases an assortment of Korean hats, each uniquely symbolizing important ranks and values within the history of Korean society. Previously staged in the Charles B. Wang Center in New York, this global traveling show is in collaboration with the Korean Cultural Center of the Philippines and is intended to spark interest towards deepening one’s understanding of Korean culture.

Apart from the exhibit, The M also hosted a series of educational programs on crafting Korean hats. These programs included live demonstrations by veteran craftsmen as well as do-it-yourself activities for the attendees.

The exhibit also includes a wide selection of wearable hats with an accompanying background to take photos in.

Apart from the hats themselves, screenings of educational videos as well as modern artworks based on Korean hats are included in the exhibition.

Unfortunately, Korea: A Land of Hats is now closed. However, the museum’s two other exhibits remain open: The Hat of the Matter and Quick Turn on Hyper Highways.

The Hat of the Matter

“Whether worn as protective headgear or elegant accessory, hats carry on their brim multiple meanings that interweave art and craft, form and function, heritage and fashion, society and sustainability,” the exhibit states.

Created to complement Korea: A Land of Hats, The Hat of the Matter looks into the concept of headwear, be it hat or not, as art. Curated by Bambina Olivares, this exhibit explores the abundance of concepts and emotions that the use of hats can convey. The exhibit showcases both local and international headpiece-related art made by 22 different artists.

Included in the exhibition are floating hats created by Albertus Swanepoel. Visitors can take photos while posing around the hats.

The Hat of the Matter will be open until December 20. An art talk featuring four Filipino contemporary artists featured in the exhibit, Leeroy New, Mich Dulce, Tekla Tamoria, and Aze Ong, was recently released on The M’s Facebook page.

Due to the prolonged lockdowns of the pandemic, local artist Ronald Ventura was determined to express the freedom of the open road in his art. “Art should not be caged in a piece of square or rectangular space, tucked away inside secret rooms,” he proclaims.

With the iconography of hypercars, road markings, and wild beasts, Ventura’s art evokes a sense of unrelenting speed and power — tapping into one’s primal longing for the outdoors.

In line with these themes, the exhibit itself isn’t confined to one room, as Ventura’s sculptures have also been placed outside the museum’s entrance. Quick Turn on Hyper Highways by Ronald Ventura will be open until March 2023.

The Future of The M

With regards to the transition, Garcia claims that the launch has been well-received so far. “When we ask our visitors [for feedback], they have nothing but appreciation for the shows we’ve been able to put up,” she shared.

“One of our guests recently walked up to me and said that she was overwhelmed with the space because it was so new and it was so big in comparison to where we came from,” she added.

However, Garcia also explains that there is still much to be done in acclimating to the new environment. “While we were able to bring the bulk of our processes [from our Manila space] in this new space, we’re still trying to find our groove…things we have to learn in a new environment,” she explains.

As for upcoming content during the museum’s limited preview run, Garcia mentions that there is “more in store,” as not all their spaces are currently open in the museum. She suggests that interested visitors should stay tuned to their Facebook page for more news on the matter in the coming weeks.