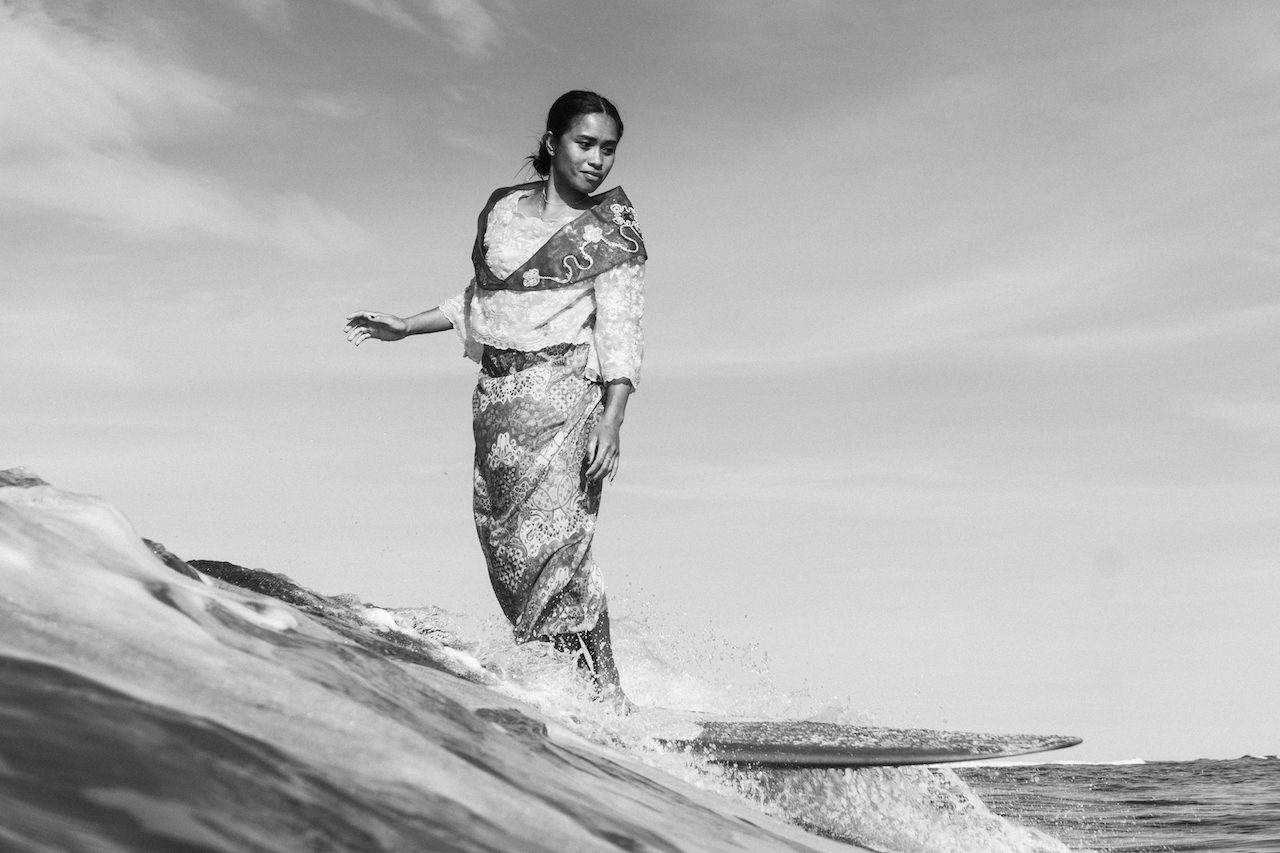 LA UNION, Philippines – In a black and white photograph, pro surfer Ikit Agudo wears a baro’t saya, the same outfit that thousands of little girls all over the Philippines are made to wear to Filipino-themed school functions.

In the photo, Ikit is doing possibly the last thing anyone wants to do when their body is covered in heavy layers of fabric. She’s surfing, calmly doing a hang ten as the wave swells behind her.

Ikit is only one of several surfers who don Filipiniana in the water for the project called Pearls, created by artist Archie Geotina, with contributions from surf photographers Bren Lopez, Jose Mirasol, and Jenal Abidin.

The idea to put surfers in Filipiniana came to Archie as he was working on his piece Ang Lakbay ng 105 Milyon, a sprawling mural painted on the ceiling of the Salcedo underpass in Makati.

“While I was doing that, I figured out this image, and I wanted to do it, right?” Archie told Rappler during art organization Emerging Islands’ Follow the Water exhibit in La Union, where Pearls was featured.

The idea followed him all the way to Siargao, where he is based, and it was there that he had the opportunity to realize it.

In the early days of the pandemic, he met with Ikit and her sister, fellow surfer Aping Agudo, who were at a loss for what to do since tourism on the island came to a halt.

“What happened was that Ikit and Aping wanted to do something because, you know, all tourism had ended, so they were like, ‘What can we do?'” he said.

“So then, I told them I’m not a businessman, the only thing I know how to do is make art,” he shared. At that point, he shared his idea with them and asked them to be his muses in exchange for a percentage of the profits from the project.

To bring his concept to life, Archie commissioned his friend, Bren, who is an experienced water photographer. The outfits were then sponsored by Rafaella’s Filipiniana, who knew full well that the clothes would get wet in saltwater.

“Nung fini-fit ni Ikit at ni Aping ‘yung clothes, ‘yung itsura nila, ‘Tanginang ‘to, baliw…. Ano ba ‘tong pinapagawa mo sa’min?’” Archie laughed, at the same time stressing that what they did was no walk in the park. (When they were fitting the clothes, they looked at me like, “This son of a bitch is crazy, what is he making us do?”)

“Mahirap (It was hard), but it’s a testament also to how good the surfer is if you can surf against the whole thing,” he said.

After several days of shooting, they were able to come up with 72 photos, though they only chose four to be included in the first collection.

The collection was originally launched on June 12, 2021, Independence Day, and it quickly went viral on social media.

The full collection, with new, never-before-seen photos, will be released on the same date this year – a deliberate choice because for Archie, the photos, more than anything, represent freedom.

“What we have as clothing is more based on what the colonizers told us to wear, what our oppressors told us to wear. So therefore, the Filipiniana is actually a symbol of oppression,” he said. “But then, when you surf, which is an act of freedom, and you’re a woman, you go against every chain that’s presented to you.”

This time around, the project was expanded to include his original muses Ikit and Aping alongside longboarder Maricel Parajes in Filipiniana, and Indonesian surfers Flora Christin Butarbutar, Fitri Nur Latif, and Iis Trisnawati, surfing in their traditional Kebaya.

For Archie, including queer surfers and surfers from another post-colonial country only drives home the project’s point, which is to depict empowerment against the odds.

View the full collection of Pearls on the project’s website. – Rappler.com

How a Cebuano surfer ended up riding the waves in Candon City, Ilocos Sur