‘Are we safe here?’ The night Cory Aquino hid in Cebu 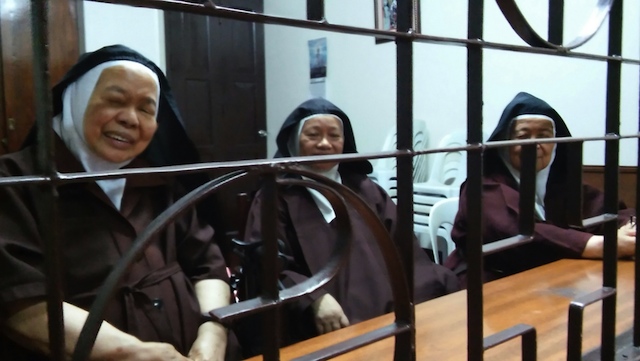 A car approached the locked gates and towering walls of the Carmelites Monastery in Barangay Mabolo.  The driver honked his horn in a pattern agreed upon with the nuns as a way to identify himself.

The driver of the car was Assemblyman Antonio Cuenco. His passenger: Corazon Aquino, the opponent of dictator Ferdinand Marcos and disputed winner of the 1986 snap election.

Also in the car was Cuenco’s wife, Nancy, who made the frantic call to the nuns after receiving word that Marcos had issued a “shoot to kill order” against Aquino in Cebu.

‘They’ll have to kill us first

“Are we safe here?” a worried Aquino asked Carmelite Mother Superior Aimee when she arrived in the compound.

“They’ll have to kill us first,” Mother Aimee reassured Cory.

These were words the widow of opposition leader Benigno Aquino Jr needed to hear.  She had every reason to be afraid.

In 1983, her husband was gunned down at the tarmac of the Manila International Airport upon his arrival from the United States. Three years later, on February 11, 1986, anti-Marcos leader and former Antique governor Evelio Javier was shot dead in broad daylight by masked gunmen at the Antique capital.

On that same day, poll watchdog National Citizens’ Movement for Free Elections (NAMFREL) conducted its own count of the snap election and declared Aquino the winner; the Commission on Elections (Comelec) named Marcos the victor, and proclaimed him president.

Cory was in Cebu to appeal for civil disobedience by boycotting companies owned by Marcos cronies and payment of taxes.

In public, Aquino was confident and indignant. “I am not afraid,” she told Cebuanos at a press conference.

“I would like Mr Marcos and his supporters to think many times before they think of rubbing me out because look what happened when they eliminated Ninoy,” she told supporters.

But in the confines of the monastery, Mother Aimee, Mother Ilaya, and Mother Marietta saw that Cory feared for her safety.

Choosing what room to sleep in, Cory checked for the room with the least number of windows. She wanted to make sure that no one outside of the monastery walls would see her.

Mother Aimee looks back at her symbolic and crucial decision to let Aquino and her companions into the monastery 30 years ago with conviction.

“We recognized her as the rightful president of the Philippines,” she said.

Mother Aimee made the call to allow a non-Carmelite priest, nun or layperson to enter the papal enclosure without permission from the Pope. This is a prerogative usually only reserved for heads of state.

While Aquino was not yet sworn in as president, earlier that day, 17 ambassadors had called Aquino to congratulate and recognize her as the true president of the Philippines.

Cebu Archbishop Ricardo Cardinal Vidal, president of the Catholic Bishops’ Conference of the Philippines at the time, released a statement against the Comelec’s decision to declare Marcos the winner of the snap election.

“According to moral principles, a government that assumes or retains power through fraudulent means has no moral basis,” Vidal’s statement read.

When Aquino arrived, the church was already decorated in yellow because she had been previously scheduled to hear mass at the Carmelites the day after the rallies.

At the monastery with Aquino was her daughter Kris, Antonio and Nancy Cuenco, John Osmeña, and Aquilino “Nene” Pimentel Jr.

Statesman and Aquino ally Ramon Mitra Jr frightened the Carmelite sisters when he arrived later, sometime between 1 am and 3 am. “We thought one of Marcos’ henchmen had come for Cory,” they said.

Mother Aimee said that while Aquino was away, the group talked about planning the next government and were getting updated with the revolution that was already unfolding in Manila.

But once Aquino was around, “they tried to lighten the mood and not talk about too many serious things.”

The nuns remember pre-showbusiness Kris as a “quiet teenager.” Mother Ilaya remembered that whenever someone would talk about Ninoy, Kris would grip her mother’s wrists.

Aquino flew back to Manila the next day to prepare for her assumption into office.

When the sisters received word that Marcos had fled the Philippines on February 25, 1986, they rang the church bells. “We were so happy. And people in Cebu came out of their houses and were celebrating by banging their pots and pans.”

“This is a country of short memories,” the nuns told Rappler. They “cannot understand” why figures of the martial law era are still in power today.

“We hear Bongbong Marcos is doing well in the vice presidential race. Enrile is still around,” they said.

Aquino never forgot the Carmelite sisters, and visited them almost every time she was in Cebu until her death in 2009.

“I don’t regret it,” Mother Aimee said of her decision to accept Aquino at the monastery. If she had not risked violating enclosure rules and made the call to accept Aquino, perhaps the events of 1986 would have turned out much differently.  – Rappler.com