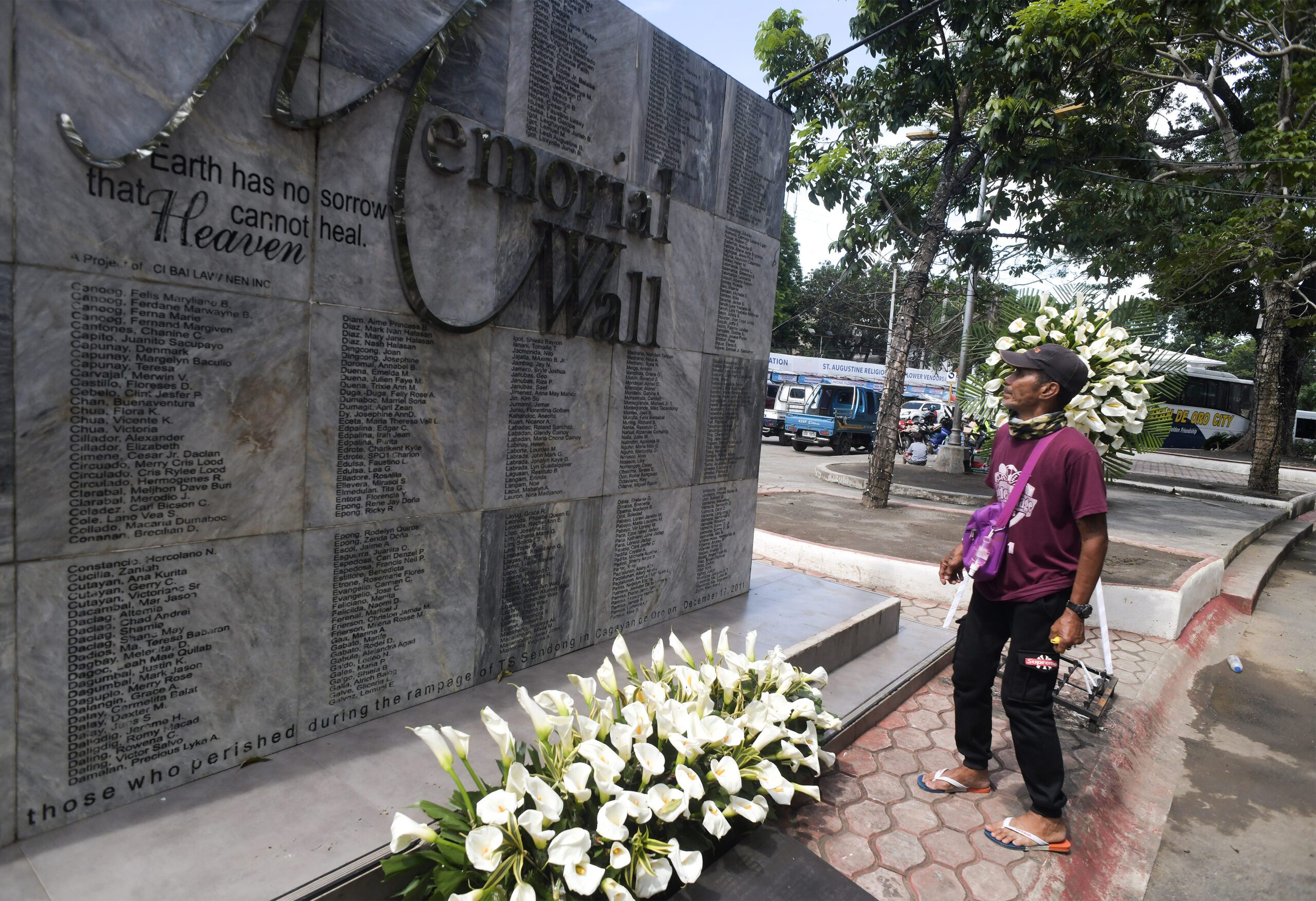 Ramos said he had two hours to bring his family’s belongings before the floodwaters spawned by Typhoon Odette (Rai) submerged his house near the Paseo del Rio Rotunda in Cagayan de Oro City.

“I have to thank that text alert for allowing me to save my belongings,” the 43-year-old parking attendant said.

Wilson said it was not the case when the 2011 Tropical Storm Sendong (Washi), and the 2012 Typhoons Pablo (Bopha) and Vinta (Tembin) struck and spilled the Cagayan River from its banks.

“I lost everything during those typhoons. At one time, I was left with only my underwear,” Wilson said.

It was the reason why he left the parking lot he supervised when he received the NDRRMC orange alert message.

“I went home to warn my wife, and we managed to bring out our belongings before the floods came,” he said.

The NDRRMC sent out mobile text alerts warning residents before Odette pummeled parts of Mindanao and the Visayas on December 16 as mandated by Republic Act 10639, otherwise known as The Free Mobile Disaster Alerts Act.

The NDRRMC sent out orange and red alerts, which meant intense or torrential rains were expected in the next three hours.

The alerts are sent out via a short messaging system (SMS) and cell broadcast service (CBS).

For many residents in typhoon-threatened areas, these alerts were what saved their lives.

Market vendor Melecio Rafal also received one of the text messages before the floodwaters from nearby Bukidnon province streamed down to Cagayan de Oro.

The 62-year-old Rafal said he quickly evacuated his entire family to a public school in Barangay Macasandig.

This time, they fled and reached the evacuation center with dry clothes.

“During Sendong, my family had to lock arms to escape the rampaging floodwaters,” Rafal said.

He said the text alerts and the frequent announcements from the Cagayan de Oro Disaster Risk Reduction Management Office (CDRRMO) gave them enough time to escape.

The 2011 tropical storm left 1,472 people dead in the cities of Cagayan de Oro and Iligan. More than 1,049 are still missing to this day.

At a corner of Gaston Park in Cagayan de Oro, a memorial wall listing the names of those who died was constructed so the residents will not forget.

Although it did not reach typhoon level like Odette, Sendong brought rain to Cagayan de Oro and Iligan more than what the cities could handle.

The heavy rainfall resulted in the river tributaries in the upland towns of Bukidnon swelling and dumping floodwaters to the main Cagayan River, according to local environmentalist BenCyrus Ellorin.

“The rising floodwaters caught many residents asleep as it struck at dawn on December 16, 2011,” Ellorin said.

He recalled that the local government of Cagayan de Oro was caught unprepared at the time, and with no advance information from PAGASA, the night of December 16 and the early hours of December 17, 2011, became “a nightmare for the city residents.”

Retired Air Force sergeant Abel Idusma recalled that the only rescue vehicle of Cagayan de Oro was not available because it was under repair.

Idusma, who was the team leader of the Air Force rescue unit then, said they fielded two military trucks to rescue residents in the beleaguered barangays of Balulang and Baloy.

“The trucks were not enough. So many people wanted to get away from the floodwaters. Some were crying and without clothes,” Idusma narrated.

Former Office of Civil Defense (OCD) information officer Titus Velez said there has been a change in the mindset on disaster response and risk reduction since Sendong struck 10 years ago.

“There were no command centers for disaster response during Sendong. We had to consult a committee then before a decision was made,” Velez said.

At present, there is a command center for the Cagayan de Oro Disaster Risk Reduction Management Office at the city hall complex.

More ambulances, rescue vehicles were used in the disaster response during the onslaught of Odette. During Sendong, there was only one.

Jabagat said they are linked to other rescue units from the Air Force, Army, Coast Guard, and other volunteer groups.

The newscast was hooked up to all radio stations in Cagayan de Oro.

Government technicians also installed a dozen automatic rain gauges along the Cagayan River and its major tributaries to warn residents of an impending flood.

“After Sendong, we have been working on how to reduce vulnerability,” Jabagat said.

When Odette struck this month, there was no casualty in Cagayan de Oro although 7,295 families or 23,269 people fled to evacuation centers because of the threat.

Sendong gave Cagayan de Oro a valuable lesson on resiliency and adaptation. For that alone, those who died during Sendong did not die in vain. – Rappler.com

Froilan Gallardo is a Mindanao-based journalist and an awardee of the Aries Rufo Journalism Fellowship. This story is also supported by a grant from Philippine Press Institute.