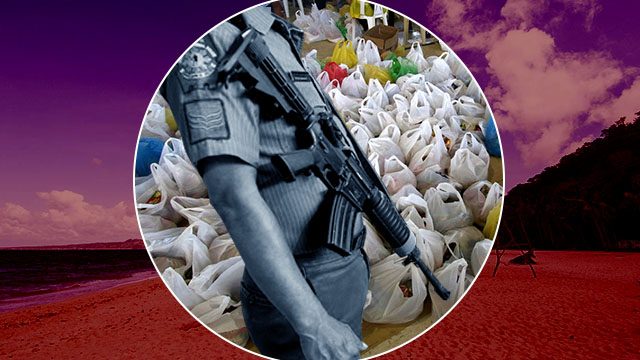 On Friday, June 29, policemen allegedly barred a total of 29 volunteers from entering Tabon Port in Caticlan, Malay, the entry point to the island.

(We coordinated with the Department of Social Welfare and Development and the inter-agency task force a few days before the scheduled distribution. Boracay residents are hungry and are waiting for [aid] then here comes this blockade.)

Rations of rice and canned goods for 500 families were collected by Rise Up Aklan, We Are Boracay, and Friends of Boracay from a donation campaign. The goods were to be distributed to dislocated workers and residents due to the shutdown.

Tugna said they conducted missions in the island back in April and May, and they did not encounter any problems then.

Tugna noted that the progress of food aid distribution has been too slow for the 3 barangays in the island – Yapak, Manoc-Manoc and Balabag – after the national government placed them under a state of calamity.

(The police in Boracay seem to see something malicious in us. They probably thought we are here for recruitment. But we, in humanitarian groups, want to help dislocated workers and residents because of the state of calamity.)

In a statement, We are Boracay coordinator Olive Abanera also slammed the alleged blockade by security forces.

“Is it wrong to feed the hungry? Is it wrong nowadays to struggle for our survival? Why do they consider humanitarian volunteers as security threats? With hundreds of armed police and military personnel deployed in the island, are they hiding something that is why they are blocking our mission volunteers?” Abanera said.

As of this posting, the Metro Boracay Police Task Force has yet issue a statement regarding the allegations.

In mid-June, the DSWD was slammed for allegedly distributing expired relief food packs in Boracay. The department has since apologized.

President Rodrigo Duterte had ordered the 6-month closure of the popular tourist destination starting April 26, to rehabilitate the island, which he described as a “cesspool.” (READ: INSIDE STORY: How Duterte decided on Boracay closure) – Rappler.com