In his press conference, Trillanes showed that Advincula apparently sent text messages to members of the “religious sector” as early as August 2018, claiming to hold “important” information that he wanted released to the public. 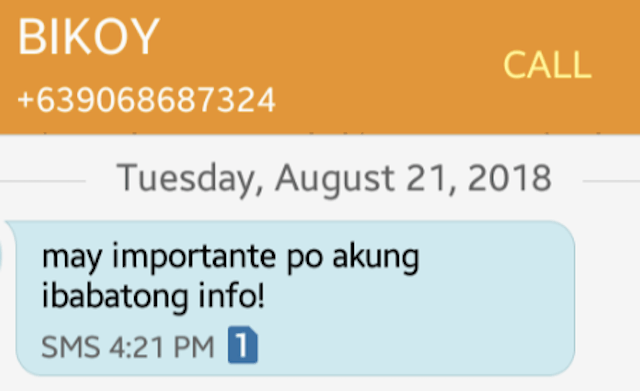 This was apparently a reference to his claims in the viral videos uploaded online in April, accusing people close to President Rodrigo Duterte of receiving millions of pesos in drug money from a supposed drug syndicate. On May 22, Advincula surrendered to police then recanted his claims, pointing his finger at the opposition Liberal Party (LP) and Trillanes as the brains behind his videos.

(Father, take my video testimony! I can wait, but blaming me, that’s what I cannot take, father! I plan on ending my life! My head aches so much!) The next day, Advincula allegedly sent a text saying that he needed P16,700 to compensate for transportation and renting expenses.

In a later text message that was undated in Trillanes’ presentation, Advincula apparently hinted that he was waiting for support from Trillanes for his videos. But Trillanes supposedly did not give him any. (PODCAST: Sino si Bikoy at dapat ba siyang paniwalaan?)

“Padre tumulong sa hindi si trillanes itutuloy ko ito! naumpisahan ko na 2 tatapusin ko ito! kahit utangin man d2 buhay ko! (Father, whether Trillanes helps or not, I will do this! I have started and I will finish it! Even if my life is on the line!)” he said.

For Trillanes, the texts only showed that the claims against Duterte came from Advincula all along. (READ: PNP dismisses Bikoy as ‘information peddler’) “Makikita niyo yung tema ha, siya ‘yung nangungulit dun sa mga nagkukupkop sa kanya. Kabaligtaran yan dun sa kanyang alegasyon na ito ay sinusubo sa kanya (You will see the theme here. He is the one who bugs those who keep him. It’s the opposite of his allegation that he was fed information),” Trillanes said.

Trillanes then showed a notarized affidavit which appeared to be signed by Advincula on May 6, where he had sworn that he stood by his claims in the viral videos. According to Trillanes, they will use the affidavit should the police or other government departments use Advincula as a witness.

(I think it suffices that I say that all I said in the Ang Totoong Narco List videos, also the videos I showed there are true, and I am ready to face the public and the courts to prove the contents of my statement.)

As of June 11, Advincula sleeps under the watch of cops in the guarded police headquarters Camp Crame, afraid to stand in public for repeated change of tune.