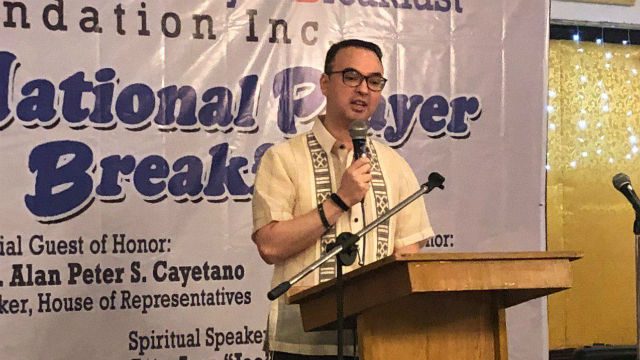 “That’s why in front of you, brothers and sisters, I’d like to tell you: December 12, hold me accountable. Hold the SEA Games organizing committee [accountable] at hindi ako magtatago (and I won’t hide),” Cayetano said as he faced members of the Philippine National Prayer Breakfast on Thursday, November 28.

The SEA Games will run from November 30 until December 11.

Cayetano said he was willing to face probes by the Ombudsman and the Senate, where his own ally, Senator Bong Go,  said SEA Games organizers would be made “answerable” for their “inefficiencies.”

(Because you know, standing before them is just an advance for something bigger. We will one day face the Lord.)

Phisgoc is the non-stock, non-profit corporation authorized by President Rodrigo Duterte to organize the 2019 SEA Games hosted by the Philippines. The President himself appointed Cayetano as the private foundation’s chairman in 2017, back when the latter was still Department of Foreign Affairs chief.

Cayetano retained the Phisgoc chairmanship even when he became Taguig City-Pateros congressman and eventually Speaker of the House of Representatives.

Multiple logistical problems and alleged budget anomalies, however, have been hounding the SEA Games even before it opens, from foreign athletes having to wait hours to reach their hotel upon reaching Manila to the government spending P55 million alone just for the SEA Games cauldron.

Feisty Senator Panfilo Lacson even said the P1.5 billion that was transferred directly to the Cayetano-led Phisgoc was “questionable” as it seemed to have come from the same mold as the foundations created for the pork barrel scam, where public money was coursed through bogus non-government organizations into the pockets of legislators.

Duterte already wants Malacañang to conduct its own investigation on the SEA Games mishaps, but he has so far cleared Cayetano – the President’s running mate in the 2016 elections – of any corruption allegations.

No kickbacks for Cayetano?

Cayetano insisted he did not pocket any public funds as Phisgoc chairman.

(There’s news today saying Senator Lacson likened it to the Janet Napoles pork barrel scam. Senator Drilon also said the ‘cauldron of Cayetano.’ I’m willing to have a lie detector test done for all 3 of us. And I can look anyone in the eye and say I didn’t earn even a single cent from the SEA Games. We even had to shell out money because of what happened.)

It was Drilon who first questioned why a huge sum of money was allocated for the cauldron to be used in the torch lighting ceremony.

On Thursday, Presidential Spokesperson Salvador Panelo said the SEA Games organizers need to accept some of the criticisms being thrown at them, saying “there is indeed something wrong with the preparations.” – Rappler.com