Behind the scenes of Corona’s walk out

May 23, 2012 9:48 PM PHT
Natashya Gutierrez
Facebook Twitter Copy URL
Copied
Rappler traces the events of Tuesday, May 22, and goes behind the scenes on the day Corona abruptly left the witness stand

Rappler goes behind the scenes and traces the steps of Corona from when he arrived at the Senate to testify in his own impeachment trial, to his confinement at Medical City.

Chief Justice Renato Corona arrives at the Senate with his wife, Cristina, their son Francis, their daughter Carla Corona Castillo, and her husband Constantino Castillo. They pass through the back entrance and go straight to the second floor, the same level as the Senate Hall, where the media is awaiting their arrival. The family is led directly to the holding room where they stay until Corona takes the witness stand.

Over the course of his 3-hour opening statement, two breaks are called: the first to give Corona time to gain his composure after he gets emotional talking about the accusations against him, and the second time, to prepare his PowerPoint presentation showing his foreign accounts.

According to defense counsel Judd Roy III, he approached Corona each time a suspension was called to check on him. He says he asked the Chief Justice both times if he was okay, and if he needed anything. Because Corona had not eaten anything over lunch (having suffered an “upset tummy”), Roy says he made it a point to periodically ask Corona about his condition.

At the end of Corona’s opening statement, he declares, “And now, the Chief Justice of the Republic of the Philippines wishes to be excused.” He then stands up and leaves the Senate Hall despite Enrile and lead counsel Serafin Cuevas calling for his return.

On his way out, Roy extends his hand to the Chief Justice for a handshake. He and Cuevas later tell the media that like the rest of the defense and those in the Hall, they were unsure of what was happening and actually thought he was simply going to the bathroom.

5: 06 pm: The walkout, stand-off and the wheelchair

Corona leaves the Hall and walks straight towards the back exit with Cristina by his side, assisted by Supreme Court security donned in blue. It is the same exit they entered through.

When he gets to the hallway where the exit door is located, he is blocked by Senate Sergeant-of-Arms Jose Balajadia, who acts upon Enrile’s orders to “close all doors.”

Balajadia recounts the incident, saying he blocked the couple.

His first words to Corona are, “Sir, I’m sorry.”

“Are you trying to arrest me?” Corona responds.

“You know very well in any court of law, any judge could order an arrest,” says Balajadia.

At this point, Cristina interrupts angrily and asks, “Is this Martial Law?”

Balajadia says he did not respond and stayed quiet after Cristina’s question, deciding instead to stay calm so as not to show his staff that the situation was “heightened.” He describes the situation as a “stand-off.”

The sergeant-at-arms also says there was no mention by either of the Coronas that the Chief Justice was not feeling well.

Meanwhile, Senate security closes all gates per Balajadia’s instruction to bar any vehicle from leaving the building. The media flood the exit door at the basement where Corona’s car is parked, anticipating his departure. Corona’s vehicle, a black Chevrolet Suburban with red streamers on its antenna, drives towards the exit door and waits for the Coronas.

It is unclear who exactly instructed the car to wait by the door, but counsels say Corona’s security may have alerted the driver as standard procedure. “I-ready niyo na ang sasakyan, paalis na tayo,” one is overheard as saying. (Prepare the vehicle, we’re about to leave). Media wait at the basement until they are notified that Corona is no longer leaving.

Back upstairs, Roy is the first of the counsels to arrive on the scene, to talk to Corona. His son Francis also follows.

“I wanted to find out what was going on,” says Roy. According to him, Corona repeatedly said, “I don’t want to continue.”

Roy says he was still confused then, thinking Corona just needed a break. Senate security tells Roy that Corona cannot leave. Roy tries to calm Corona down and convinces him to talk privately.

Balajadia instructs security to send the media away. Corona’s children and confused counsels Tranquil Salvador, Rico Quicho, and Ramon Esguerra also appear to check in on the chief justice.

According to Roy, Constantino, a doctor, tells his father-in-law Corona that his sugar must be low. This is the report that counsels take away, and pass on to waiting media. At this point, Corona is given 3 Cokes to consume; he is diabetic.

Roy says Corona told him that towards the end of his testimony, he started feeling light-headed and clammy, and wanted to be excused because he felt like vomiting.

Upon learning this, Roy enters the Executive Lounge, also on the same hallway, where senator-judges are holding a mini-caucus to discuss their next move after Corona’s sudden walkout. Roy tells the Senate President, who he describes as having been “understandably upset,” that Corona is not feeling well.

Enrile directs Roy to talk to Corona, and allows Roy’s request to let Corona rest for a few minutes. Roy says Enrile himself suggested that Corona be taken to the clinic.

A wheelchair is brought to Corona, who sits down and is wheeled to the clinic, also on the second floor.

Staff members tell Rappler that no examination is done on Corona, but he is made to lie down and rest. Constantino tells media his father-in-law is suffering from low blood sugar and high blood pressure, and was feeling dizzy and having difficulty breathing on the witness stand.

Counsels take turns coming in and checking in on Corona. According to Salvador, they tell him it is imperative he returns to the Hall, that senator-judges are upset, and that he could be held in contempt otherwise. Corona agrees to return and face the court.

Corona is wheeled back into the Hall and the trial resumes.

According to Roy, Corona wanted to apologize to the court for his abrupt departure, but when Roy reaches for the microphone to hand it to Corona, he is prohibited by Cuevas, who thinks Roy wants to make a manifestation.

The trial ends, with Corona being instructed by the court to return for direct and cross-examination the next day.

Corona and his family leave the Senate building and head straight to Medical City. They arrive at the hospital before 8 pm. The Medical City medical bulletin says “shortness of breath, cold sweats, and light-headedness” is the reason for the confinement, symptoms of hypoglycemia. 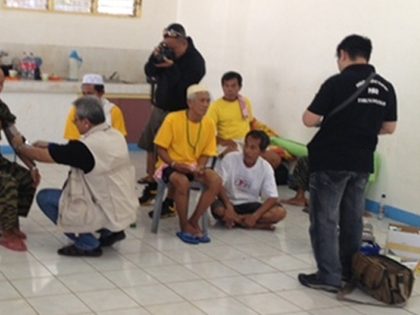 He goes straight to the 15th floor where he is confined for the night.

Supreme Court spokesman Midas Marquez leaves Corona, and tells the media he is still fine and in good shape to testify on Wednesday, May 23.

This is consistent with the medical report that says symptoms “appeared to have been partially relieved when he ate.”

About 1:00 am: Monitoring in place

Corona is transferred to the Intensive Care Unit for “close monitoring,” because he is a “high risk” patient for a possible heart attack.

Cuevas visits Corona at the hospital in an attempt to speak to him and get instructions. He sees Corona but is unable to speak to him, as he is still sedated. He waits for two hours until he leaves at 11:30 am.

During his time there, at 10 am, Medical City doctors release a medical bulletin and tell the media Corona will need to stay in the ICU for the next 48 hours.

Day 41 of the impeachment trial begins. Corona is absent.

Enrile tells his counsels they have until Friday for Corona to testify, otherwise, both sides are ordered to close their cases and deliver their final arguments on Monday, May 28. The impeachment court renders a decision afterwards. – Rappler.com

Click on the links below for more of Rappler’s special coverage of CJ Corona’s trial.