Facebook Twitter Copy URL
Copied
This move is 'prejudicial to peace,' says the Armed Forces of the Philippines

The Armed Forces of the Philippines (AFP) lambasted China on Thursday, April 1, for building “illegal” structures in Pagkakaisa Banks (Union Banks), describing the move as “prejudicial to peace.”

“The Laws of the Sea gives the Philippines indisputable and exclusive rights over the area. These constructions and other activities, economic or otherwise, are prejudicial to peace, good order, and security of our territorial waters,” the AFP said in a statement.

The military issued the statement after conducting patrol on Tuesday, March 30, over Union Banks, a group of features within the Kalayaan Islands Group under the Municipality of Kalayaan in Palawan.

“During this patrol we were able to document manmade structures that built on some of the features. These structures are illegal,” the AFP said. 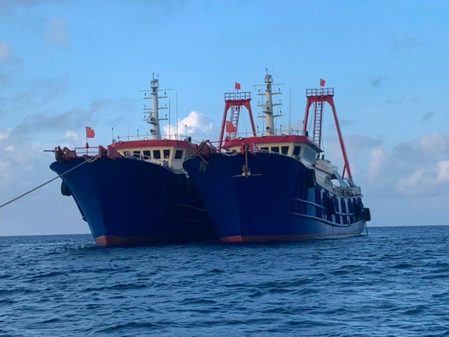 China has been rapidly expanding its claim in the region despite a 2016 Hague ruling, a legal victory for the Philippines, that invalidated China’s expansion to the West Philippine Sea – the part of the South China Sea that belongs to the Philippines.

The Duterte administration has so far called out China through diplomatic protests, which have done little to deter the superpower from asserting its claim in the area. – Rappler.com