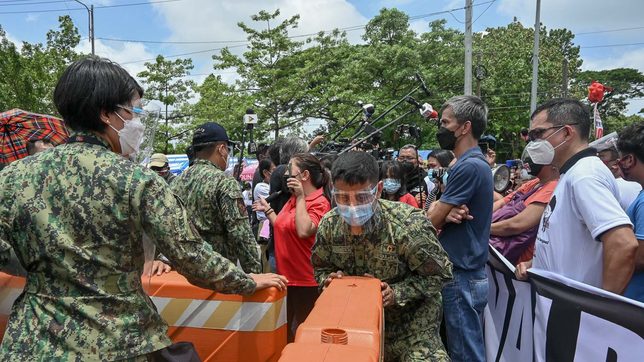 FIGHTING FOR SPACE. A commotion takes place after police arranged orange barriers which limiting the space of the demonstrators along Commonwealth Avenue on July 26, 2021, the day of the State of the Nation Address.

Quezon City Mayor Joy Belmonte has asked QC Police District (QCPD) chief General Antonio Yarra to formally explain why security forces blocked protesters from reaching the final destination originally agreed upon by all parties for rallies on the day of the State of the Nation Address (SONA) on Monday, July 26.

“[Belmonte] has asked [Yarra] to submit a written explanation to shed light on allegations made by rally organizers that the agreement forged among these protesters with the QC [local government unit] through Belmonte and Yarra was not honored by the latter,” the QC government said in a statement on Tuesday, July 27.

Quezon City officials and the police told protesters in a meeting on Saturday, July 25, that the demonstrations would not extend beyond St. Peter Chapels along Tandang Sora Avenue.

Rally organizers agreed, but were surprised on Monday noon when police installed orange barricades near Central Avenue, which is some 250 meters away from the final destination agreed upon by all parties during Saturday’s meeting.

That led to a commotion between protest leaders and the cops, who ultimately caved in and removed the barriers after minutes of heated dialogue.

Yarra said they had to install the barriers because the march was already disrupting the flow of traffic, but progressive leaders insisted that the police broke their word.

Protesters asserted that President Rodrigo Duterte’s incompetence and human rights violations have left them with no choice but to take to the streets despite the persistent threat of COVID-19.

To mitigate risks, rally organizers shortened their activities, scrapped the traditional burning of effigies, and agreed on the proposed final destination for the march, despite the fact that it is five kilometers away from the Batasang Pambansa, where Duterte delivered his SONA on Monday.

When newly-elected president Duterte held his first SONA in 2016, protesters were allowed to stage a protest near the Quezon City Polytechnic University, which is less than a kilometer from the SONA venue. – Rappler.com