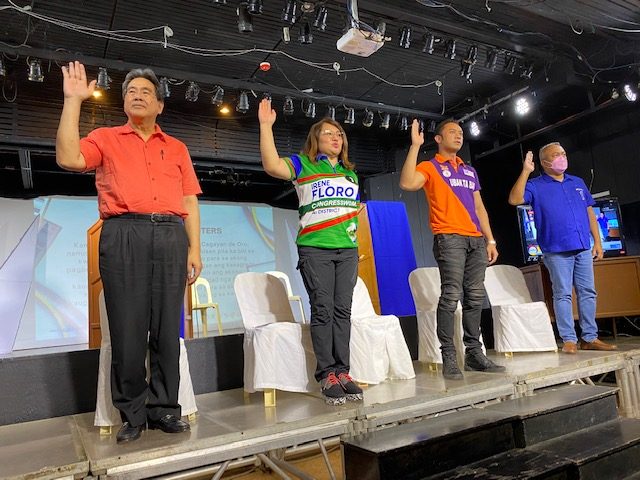 Facebook Twitter Copy URL
Copied
The Cagayan de Oro vice mayor, now running for Congress, seeks to succeed his father and wants no less than an endorsement from the Iglesia ni Cristo

Organizers of the Pag-ila 2022 congressional forum on Wednesday, April 13, said Uy sent word at the eleventh hour that he had to go to Metro Manila and skip the forum for congressional candidates organized by the civil society group Lihuk Movement, the Commission on Elections (Comelec), and the National Movement for Free Elections (Namfrel).

Uy is widely perceived as the man to beat in the congressional race in the city’s 1st District. He is seeking to succeed his father Rolando, the incumbent representative of Cagayan de Oro’s 1st District and the mayoral candidate endorsed by outgoing Mayor Oscar Moreno.

Nestor Banuag Jr., Lihuk Movement lead convenor, said the Comelec first informed the forum organizers about Uy’s short notice, and the Office of the Vice Mayor subsequently sent them a letter to explain why he decided to skip the face-off.

Uy’s staff told Rappler that the vice mayor was scheduled to meet with INC leaders in Quezon City at 3 pm on Wednesday, two hours after the start of the congressional forum at the Xavier-Ateneo Little Theater.

His opponent, Councilor Lordan Suan, confirmed that candidates have been meeting with INC leaders and hoping to get the endorsement of the religious group that is known to vote as a bloc.

Suan said he too went to the INC office a day earlier but did not say whether or not he won the INC’s endorsement just like it did three years ago when he ran for a city council seat.

“I thank them for supporting me in the 2019 elections,” Suan said.

Taking advantage of Uy’s absence, Suan scored points, alleging that the Uy-led city council blocked his call for an official investigation into how the local government managed and distributed funds intended as COVID-19 aid.

A third candidate for the 1st District, businessman Tito Mora, said the controversy highlighted the need to use digital technology to ensure transparency and access to information about all local government transactions.

The second half of the forum allowed two candidates for congressional candidates in the city’s 2nd District – reelectionist Rufus Rodriguez and businesswoman Irene Floro – to square off.

Rodriguez, a political ally of Suan, also threw jabs at Uy and his congressman-father over the way their group handled the COVID-19 pandemic aid in the city.

He said city hall has not been transparent about how it distributed COVID-19 pandemic aid, and the elder Uy did not exert efforts to secure more national government aid to help Cagayanons adversely affected by the pandemic.

Floro, Rodriguez’s challenger and the candidate of the Uy-led ticket for the 2nd District’s congressional post, called the allegations made by Suan and Rodriguez unfair but added she was not in the position to discuss it because she had nothing to do with the distribution of the government aid.

Floro is a former president of the Cagayan de Oro Chamber of Commerce and Industry, and it is her first time seeking public office.

If she succeeds in unseating Rodriguez, Floro said she would work for more aid for small businesses and vendors in Cagayan de Oro, but stressed the need to rationalize the aid packages.

The civil society group organized the congressional forum to allow local candidates in Cagayan de Oro and Misamis Oriental to present their ideas and platforms of government to a broader audience. It was shown on Channel 24 of Parasat and live-streamed by the cable TV company and Rappler.

Wednesday’s face-off among contenders in the city’s two congressional races was one of four forums organized by the Lihuk Movement this month. The first was for candidates for city council seats held on April 6.

A similar forum for mayoral and vice-mayoral bets will be held on April 20, and another for gubernatorial and vice-gubernatorial candidates is scheduled on April 23. The forums would be livestreamed by Rappler and Parasat, and shown on the local cable TV channel. – with reports from Herbie Gomez/Rappler.com