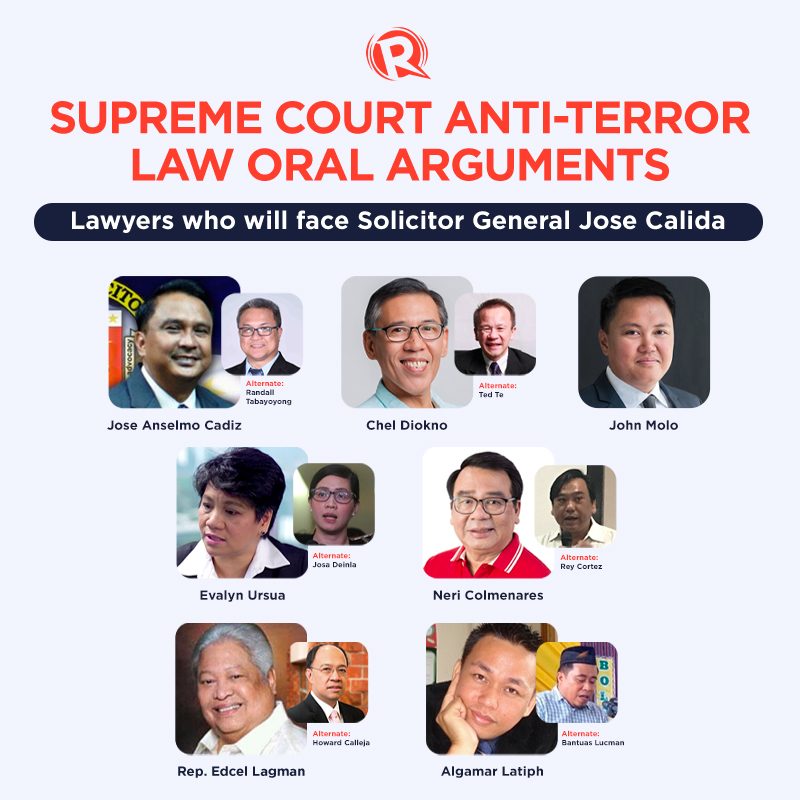 In his 4 years of facing the Supreme Court on behalf of President Rodrigo Duterte’s government, Solicitor General Jose Calida faces his toughest battle yet. He has to defend the contested anti-terror law opposite 13 lawyers handpicked by the best and brightest who make up the 37 groups of petitioners.

The Integrated Bar of the Philippines (IBP) sent on Wednesday, January 13, a manifestation on behalf of all the petitioners naming their 13 representatives to the much-awaited oral arguments on January 19. Leading them is former solicitor general Jose Anselmo Cadiz.

The Supreme Court had asked for only 8 presenting lawyers to make the oral arguments orderly, but the petitioners submitted 13 names, 6 of whom are alternates to the main oralists.

This is a much-awaited hearing after 6 months since the law took effect. The law has already jailed two Aetas in Zambales, and has empowered the Anti-Money Laundering Council (AMLC) to freeze accounts “related” to the Communist Party of the Philippines-New Peoples’ Army (CPP-NPA), a move feared to result in worse attacks against government critics.

There is no Temporary Restraining Order (TRO) yet, even when in past contentious laws, the Supreme Court issued a TRO even before holding oral arguments.

Presenters for the petitions

Cadiz, a solicitor general under the Aquino administration and a former national president of the IBP, has as alternate IBP’s director for bar discipline Randall Tabayoyong.

UP Constitutional and Political Law professor John Molo, who argued in the Supreme Court before against the pork barrel, will also present.

Cadiz, Tabayoyong, Diokno, Te, and Molo will tackle procedural arguments and argue that the definition of terrorism is void for vagueness, and that the other terror crimes under the law violate freedoms of speech, religion, and association.

Noted women’s rights lawyer Evalyn Ursua will argue that the anti-terror council’s powers, and the AMLC’s investigative and freeze powers under the law are unconstitutional. National Union of Peoples’ Lawyers or NUPL’s Josa Deinla is Ursua’s alternate.

Former Bayan Muna representative Neri Colmenares, with NUPL’s Rey Cortez as alternate, will argue that penalizing threats, planning, and inciting to terrorism; surveillance under the law, and house arrest, are also unconstitutional.

Opposition lawmaker Edcel Lagman will argue that warrantless arrest and detention, and the period of detention, under the law are unconstitutional. Litigator Howard Calleja, who filed the very first petition, is Lagman’s alternate.

All in all, they will have a total of 45 minutes for their presentation. The Office of the Solicitor General (OSG) will also have 45 minutes to present its arguments, after which the justices of the Supreme Court can start interpellations.

Calida had requested to cancel the oral arguments citing safety concerns from the coronavirus, but the Supreme Court pushed through with an in-person hearing, albeit with a limited number of participants allowed in the Court’s revered session hall.