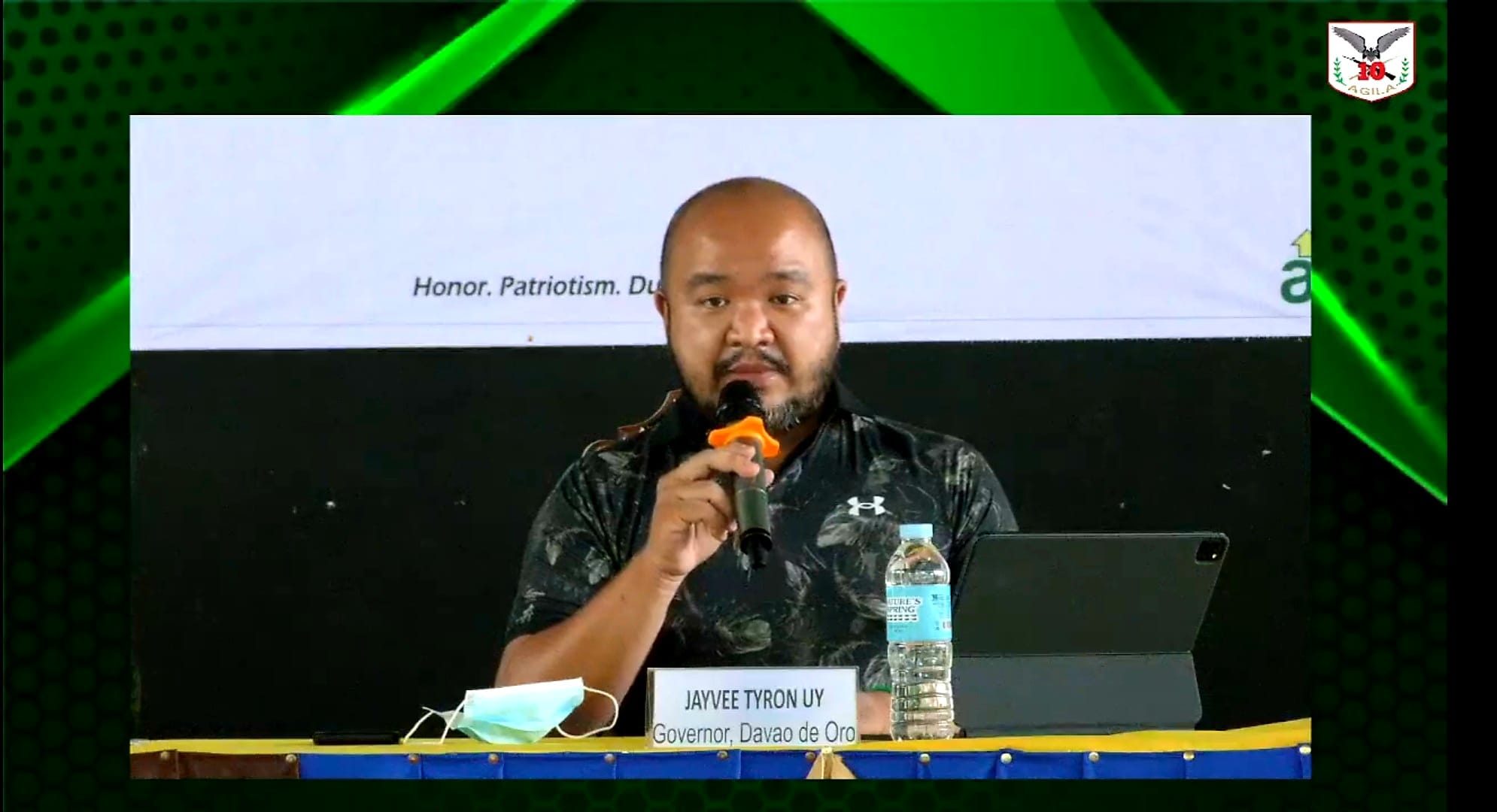 BUKIDNON, Philippines – Davao de Oro Governor Jayvee Tyrone Uy on Saturday, February 26, belied claims made by the Communist Party of the Philippines (CPP) and the Save Our Schools Network (SOS) that soldiers and rebels did not clash in New Bataan on the day two activists and three other suspected guerrillas were reported killed in the town.

Uy vouched during a news conference the military’s claim that there were encounters in New Bataan town just as the military has claimed.

He said the information about the fierce encounters came from civilians in the affected hinterland villages.

“We deserve peace and order, and we are grateful to the security sector for truly making a change in the province. We don’t want our children to be recruited and separated from their families,” Uy said.

The February 24 clashes resulted in the deaths of activists and Lumad school volunteer teachers Chad Booc and Gelejurain Ngujo II.

Booc, a Math teacher of a Lumad school closed down in Surigao del Sur, rose to prominence after he was arrested and charged with trafficking in Cebu City in early 2021 – police accused him of training “child warriors.” The Davao del Norte prosecutor’s office dismissed the cases against the activists due to “insufficiency of evidence, lack of probable cause, and being outside the territorial jurisdiction of this office.”

Brigadier General Jesus Durante, commander of the Army’s 1001st Infantry Brigade, said the Thursday clashes were among a series of fierce encounters in the hinterlands of Davao de Oro in recent weeks.

He said the military had intelligence information that a group of Lumad school teachers had integrated with a New People’s Army (NPA) unit in Southern Mindanao in December 2021.

The military said one of at least a dozen encounters killed Menandro “Bok” Villanueva, a ranking NPA leader in the Davao region on January 5.

He warned of more encounters, adding that the military was working to end the communist insurgency before President Rodrigo Duterte steps down by mid-2022.

So far, Durante said, the military operations since 2018 reduced 17 NPA guerrilla fronts to five, and two of these have been significantly weakened.

“As I speak here, there is a development in Guerrilla Front 3 areas. I’m going to proceed there… GF3 will likely be cleared soon,” he said.

The military has stepped up the hunt for NPA leader Eric Casilao, his wife, and his group. Officials said the Casilaos are the last remaining leaders under the NPA’s Southern Mindanao regional committee.

“They can send surrender feelers. They should come down now. We can assure their safety. They don’t have to go through the way their comrades suffered,” Durante said.

Durante also questioned the credibility of CPP spokesman Marco Valbuena who earlier claimed that there was no encounter in Barangay Andap, New Bataan town on the day Booc and Ngujo were killed.

“Who is Marco Valbuena? Have you seen him? Does he even exist? We don’t know. If you look at all his statements, it all boils down to propaganda justifying their inhumane actions,” Durante told reporters during the news conference.

Meanwhile, Sandugo, a Moro and indigenous peoples’ movement, called on the Commission on Human Rights (CHR) to look into the circumstances surrounding the deaths of Booc and Ngujo following allegations that no encounter took place in New Bataan town on Thursday contrary to the military claims.

Sandugo, in a statement, said it was worried that “relentless disinformation and red-taggings” laid the groundwork for what looked like “murders.”

“The vilification and killings must stop now,” read part of Sandugo’s statement released on Saturday. – Rappler.com