Facebook Twitter Copy URL
Copied
'The multiplicity of the gunshot wounds, what was targeted – the chest, abdomen – was designed to kill. The intention (was) really to kill,' says forensic pathologist Dr. Raquel Fortun

BUKIDNON, Philippines – Why were the limbs of a community health worker severed, and parts of the skin of a Lumad rights activist and volunteer school teacher peeled off?

Serious questions surrounding the deaths of the five people who were in an alleged encounter with soldiers in Davao de Oro province were raised even as a forensic pathologist performed an autopsy on the body of Lumad rights activist Chad Booc in Cebu City on Monday, March 7.

An X-ray showed bullet fragments, and a deformed bullet was taken from his left chest wall.

“The multiplicity of the gunshot wounds, what was targeted – the chest, abdomen – was designed to kill. The intention (was) really to kill,” Fortun said. 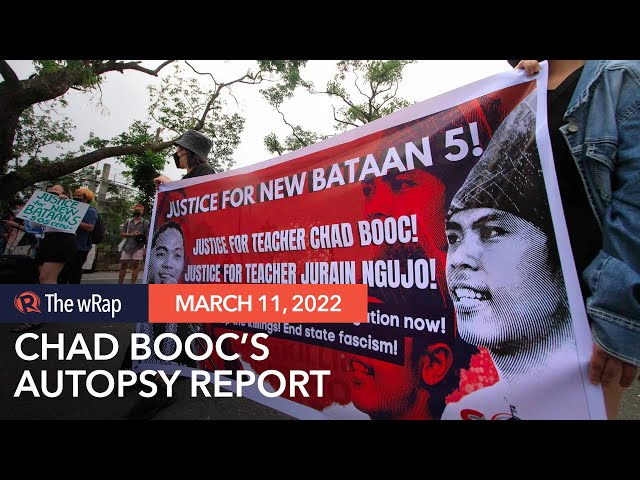 Booc was laid to rest on Wednesday, March 9.

The Save Our Schools Network in Cebu said the remains of Booc’s companions – Lumad school volunteer teacher Gelejurain Ngujo II and community health worker Elegyn Balonga (not Elgyn as reported earlier)  – also raised more questions about how the activists were killed.

The group has rejected military claims that the five were killed during an encounter in Davao de Oro in late February, saying they were neither NPA rebels nor armed, and that they were sent to the province to do research work.

Aside from gunshot wounds and bruises, why were the limbs of Balonga severed, and parts of the skin of Ngujo peeled off?

Megara Lim, the spokesperson of SOS-Cebu, said parts of Ngujo’s skin on the stomach and right thigh were peeled off.

Balonga’s left leg was severed a few inches below the knee while her right foot was cut off near the ankle, the group said.

“Blood clots had also formed on Elegyn’s fingertips. Based on the visible marks on her body, she was also shot on her right knee and below the right elbow. Her jaw was also visibly torn off and her nose bridge was bruised,” said Lim.

“With this new development, the Save Our Schools Network, friends, families, and fellow advocates urgently call for the Commission on Human Rights and other independent bodies locally, nationally, and internationally to conduct a swift, impartial and thorough investigation of the New Bataan 5 massacre. We also call on all supporters and allies to amplify our search for justice. There can be no peace until there is justice for their deaths and all victims of state-sponsored killings,” read part of the group’s statement.

The families of Ngujo, Nalonga, and two others who died in the alleged encounter did not seek independent autopsies. Ngujo and Balonga were laid to rest last week. – Rappler.com