“After a thorough review of the cases that were filed against those involved in the vaccine/vaccine slot for sale, our legal team came up with the conclusion that Ms. Nina Ellaine Dizon-Cabrera should not have been included in the criminal complaint based on the appreciation of the pieces of evidence on hand,” Eleazar said.

“With this development, I already instructed the CIDG to withdraw the cases filed against her before the Mandaluyong City Prosecutor’s Office in the soonest possible time,” he added.

The complaints against the other two suspects – Cyle Cedric Bonifacio, and Melvin Polo Gutierrez – will remain, Eleazar said.

Cabrera was the first to alert the public about the alleged illegal sale of government-procured COVID-19 vaccines in some local government units in Metro Manila. The PNP, however, tagged her as a suspect in the scam, and accused her of estafa and violation of the Anti-Red Tape Law of 2007 and the Cybercrime Prevention Act of 2012.

The PNP earlier alleged that Cabrera “offered 50 to 100 vaccination slots in Mandaluyong,” which the young businesswoman categorically denied. She had also vowed to fight the charges. 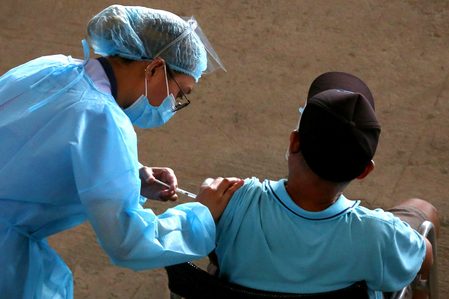 Eleazar earlier assured Cabrera that he would personally monitor her case, after he saw her statement and interviews on media regarding the criminal complaint. He had ordered the CIDG and the Anti-Cybercrime Group (ACG) to review Cabrera’s case “in order to check if there were lapses in the conduct of investigation and in the preparation of the cases.”

Following the lapses discovered during the review, Eleazar also ordered the relief of Police Lieutenant Colonel Arnold Moleta, chief of the CIDG Eastern Metro Manila District Field Unit “for lapse in judgment and for command responsibility in the conduct of investigation.”

“Let this serve as a reminder to all our personnel that if you are assigned to do a task, always make sure that you do your best, and do it right,” Eleazar added.

Cabrera had earlier denounced her inclusion in the PNP’s charge sheet and lamented that the police did not get in touch with her after she exposed the “vaccine for sale” scheme online.

Cabrera was in the spotlight late last year after some netizens called for a boycott of Colourette products after the businesswoman criticized the government’s response to disasters. – Rappler.com