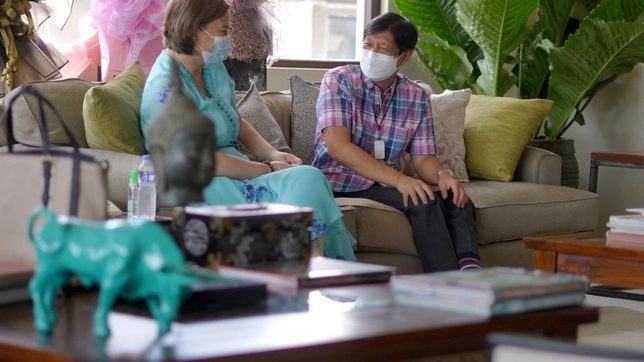 Facebook Twitter Copy URL
Copied
'I think it's not accurate to say that we have aligned or we are aligning with the administration because obviously the administration has its own candidate in the person of you-know-who,' says Marcos spokesperson Vic Rodriguez

The Marcos camp issued the statement as it went from courting President Rodrigo Duterte to now pulling all the stops to get his daughter, Davao City Mayor Sara Duterte, as the running mate of the former senator.

“I think it’s not accurate to say that we have aligned or we are aligning with the administration because obviously the administration has its own candidate in the person of you-know-who,” said Marcos’ spokesperson Vic Rodriguez, referring to Duterte’s longtime aide Senator Bong Go who is now runnning for president under the young Pederalismo ng Dugong Dakilang Samahan (PDDS).

Over a month earlier, on October 7, Marcos had said that he had courted President Duterte to be his vice president, telling CNN Philippines’ The Source that he and the president “ang natitira dito sa (are the only ones left in the) administration side. In fact, I think all presidential candidates now have identified themselves with the opposition.”

Rodriguez said on Tuesday that the situation had changed since that time.

“That was before everything happened yesterday, that’s why I’m putting it in the proper context, and as much as possible trying to be precise,” Rodriguez said, referring to the substitution chaos where Go ran for president, Duterte teased running for vice president then slid to senator, and Sara ran for vice president under Gloria Macapagal Arroyo’s Lakas-CMD.

Duterte was reportedly disappointed with Sara’s decision to slide down to vice president, accusing Marcos of orchestrating the whole deal. Duterte said he cannot support Marcos’ presidency and that he would reveal the reason during the campaign period. Rodriguez refused to comment on the President’s latest statements, just saying, “We respect the President.”

Asked what happened to the alliance they were building with the President prior to the substitutions, Rodriguez said, “They have their own internal processes and we are not privy to their decision-making processes.”

Now, their attention has shifted to Sara with Marcos’ Partido Federal ng Pilipinas (PFP) quickly adopting the presidential daughter as their vice president. Lakas-CMD, meanwhile, has so far not declared if Marcos would be their adopted standard bearer.

“It will be best if [Lakas-CMD] will reciprocate and accept our adoption as VP candidate…. We are in the continuous process of forging the best and strongest political alliances in preparation for the elections,” said Rodriguez.

Rodriguez said, however, that President Duterte “is always under consideration to be included in the ticket.”

Rodriguez said Marcos himself will announce their Senate slate, which the spokesman described as “formidable.”