Pacquiao gives 2,000 people in Siargao P1,000 each as he starts Caraga sortie 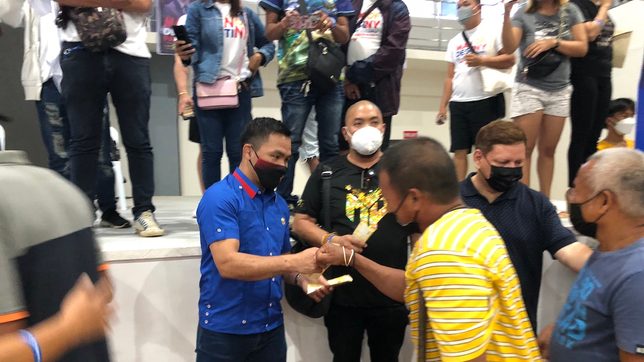 GIVEAWAYS. Senator Manny Pacquiao gives money and goods to people who came to see him at the Siargao Sports Complex on November 27, 2021.

Facebook Twitter Copy URL
Copied
'I have been giving money to poor people since 2002,' says presidential candidate Manny Pacquiao, who maintains the act should not be construed as influencing people to vote for him

Senator Manny Pacquiao started his four-province sortie in the Caraga region, visiting Siargao Island for the first time and spending more than P2 million there by giving people money on Saturday afternoon, November 27.

The Filipino boxing icon-turned-senator and now presidential candidate gave around 2,000 people who came to see him at the Siargao Sports Complex P1,000 each.

On top of that, he also gave each of them five kilos of rice, a food pack, and a t-shirt.

About 1,000 other people without pre-distributed stubs received P200 each.

“It’s my personal money. It’s from God. I have been giving money to poor people since 2002,” said Pacquiao, saying the act should not be construed as influencing people to vote for him.

He added: “It’s my first time to visit Siargao. I’m planning to develop a place and a business in Siargao.”

Pacquiao was in Surigao City on Sunday, November 28, where he was greeted by many Surigaonons eager to see their boxing idol, and mostly hoping to get some of the presidential hopeful’s giveaways.

People flocked outside city hall and waited to get a glimpse of the retired boxing hero, said Surigao City Mayor Ernesto Matugas Jr.

Pacquiao told reporters he was overwhelmed by the warm welcome.

The senator will be in Caraga until Tuesday, November 30, for his sorties in the two Surigao and two Agusan provinces ahead of the start of the campaign period. His group has decided to skip the island province of Dinagat.

Pacquiao and his group are scheduled to be in Butuan City in Agusan del Norte on Monday, November 29, and then Agusan del Sur the following day, where the senator is expected to shell out millions of pesos again as giveaways. – Rappler.com