‘Nothing personal’: Alvarez’s past attacks now water under the bridge for Robredo DAVAO DEL NORTE, Philippines – Davao del Norte 1st District Representative Pantaleon Alvarez once called her “shameless.” He even thought of impeaching her as Vice President once.

But for presidential candidate Leni Robredo, that’s all water under the bridge.

In accepting the endorsement of President Rodrigo Duterte’s erstwhile ally on Thursday, March 24, Robredo had somehow moved past the vicious statements Alvarez threw at her back when he was House speaker.

What matters now, she said, is that they are both fighting for the return of good governance in the country. Confronted with their complicated political past, Alvarez turned to Robredo to apologize. But the lone female presidential candidate said he did not need to. 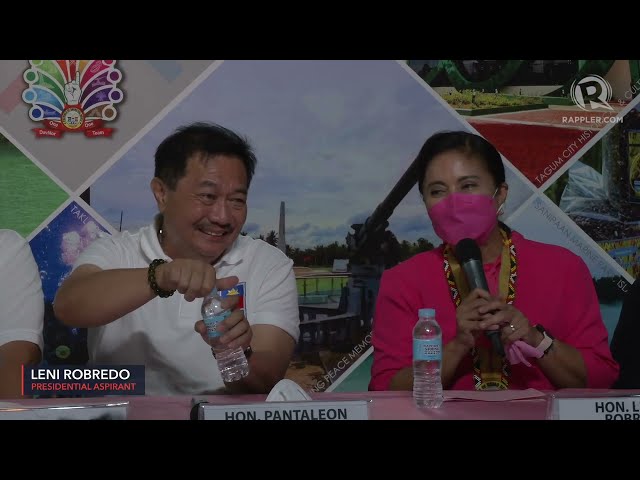 (First of all, speaker, you do not need to apologize. Because over the course of our service to the country, there really are things we would disagree on. We don’t even expect allies to always agree with each other all the time.)

In a surprise move, Alvarez and the Partido Reporma – which he revived for the 2022 elections – dropped their standard-bearer Senator Panfilo Lacson and shifted their allegiance to Robredo.

The dealbreaker for many Reporma members in this province was Lacson’s poor showing in the surveys. Robredo is still a far second placer to the current frontrunner, the late dictator’s son Ferdinand “Bongbong” Marcos Jr., but Alvarez and his allies believe she is gaining ground.

They endorsed her following weeks of Robredo rallies being attended by tens of thousands of supporters. The biggest one yet was staged only four days ago in Pasig City, a show of force with over 130,000 “Kakampink” supporters in attendance.

Robredo said she welcomed members of Partido Reporma with open arms precisely because she wanted to be seen as a unifying figure in this elections. She chairs the once-ruling Liberal Party but decided to run as an independent candidate to make it easier to coalesce with other sectors.

(I have already told you that my main message in filing as an independent is this: I am open to all. I am open to all as long as we are one in our aspirations to fix our country.)

She conceded she and Alvarez may disagree on many things. Alvarez used to be a loyal defender of Duterte, slamming Robredo in the past for criticizing the President’s bloody war on drugs.

So impassioned was Alvarez in defending Duterte that he once mulled filing an impeachment complaint against Robredo in 2017.

But things changed when Alvarez was ousted as speaker in 2018, with Duterte’s own daughter and Davao City Mayor Sara Duterte among the key figures behind it. She is now running for vice president alongside Marcos.

For Robredo and Alvarez, their common goal is to prevent the kind of politics being represented by the Marcos-Duterte tandem to return to Malacañang.

(Partido Reporma and I share the same goals: to fix our country through good governance. And we are one in fighting for that. We did have disagreements in the past, and most probably we are not aligned in many things. But I’ve always said that what’s more important are the things we agree on, not the things we disagree on.)

(In this case, speaker Alvarez and I share in our beliefs, in our interests in this elections, in what we believe to be the best for the country.)

This is an unlikely but strategic alliance that is expected to boost Robredo’s numbers in the Davao Region.

Robredo lost by a huge margin in Davao in the 2016 vice-presidential race as Davaoeños then favored Duterte’s running mate, Alan Peter Cayetano. Marcos was in second place and Robredo, a distant third. – Rappler.com