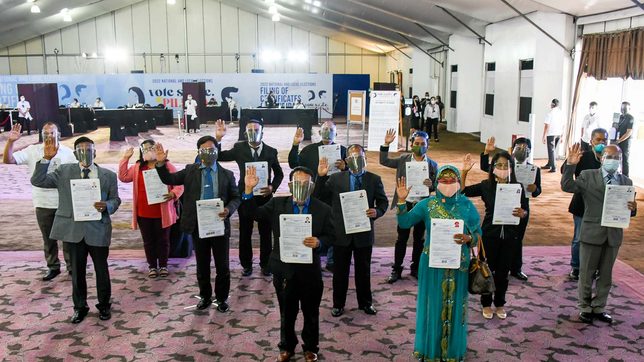 COMPLETE SLATE. Members of the Philippine Green Republican Party (PGRP) file their respective COC's at the Sofitel hotel in Pasay City on October 4, 2021.

The Philippine Green Republican Party (PGRP) has two presidential and two vice presidential bets, as factions of the party were issued nominations and filed their certificates of candidacies (COC) on October 1 and October 4.

Laurencio “Jun” Yulaga and Alexander Lague filed for the presidency and vice presidency, respectively, on October 1, the first day of the COC filing.

On October 4, another faction filed for the 2022 elections with a complete senatorial slate. It was headed by Leo Cadion, who is running for president. His running mate is Princess Sunshine Amirah Magdangal.

Four more members of the party filed for senator on October 7 and 8, but it wasn’t clear which faction issued their nomination documents.

During his speech on October 4, Cadion said they were planning to file for a petition to annul the other camp’s COCs. He alleged that Yulaga and Lague’s documents were manipulated.

The PGRP has participated in previous Philippine elections since 2007, when the Commission on Elections (Comelec) accredited the party and declared that it “has a nationwide constituency.”

However, the Comelec has also declared some of their members as nuisance candidates. This includes Felix Cantal, their presidential bet in 2010.

Below are PGRP’s members who filed for senator for the 2022 elections.