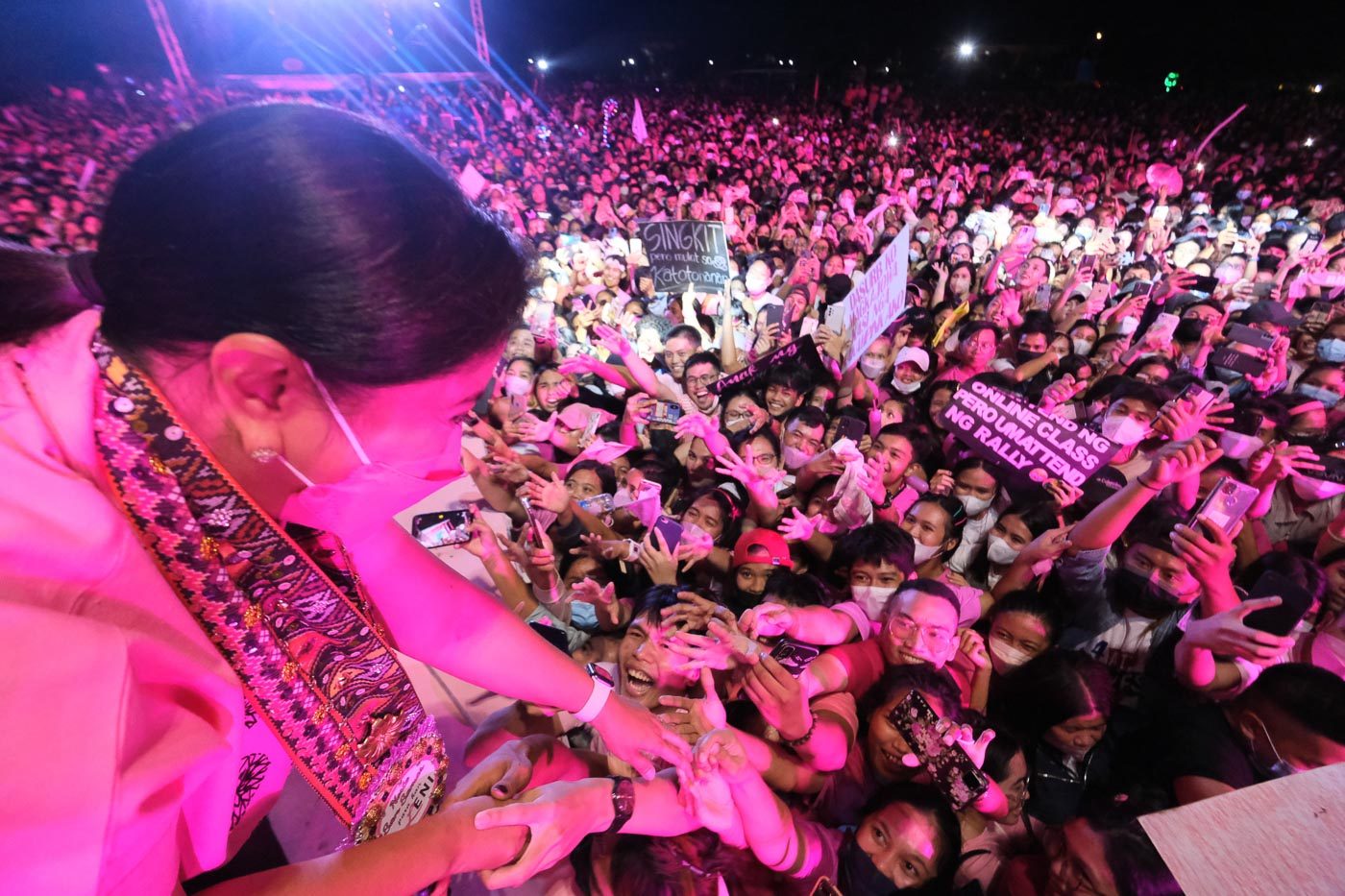 CATARMAN PEOPLE'S RALLY. Catarman pulled out all the stops for the Rayhak: Northern Samar Peopleu2019s Rally for presidential candidate Vice President Leni Robredo at the University of Eastern Philippines in Catarman, Northern Samar on March 28, 2022.

Facebook Twitter Copy URL
Copied
Over 70,000 people flock to the Leni-Kiko rally in Catarman, and thousands more attend the rallies of the tandem and their Senate slate in Calbayog and Catbalogan

(Here in Northern Samar and the three provinces of Samar, your choice is crucial because it will answer the question, “Will the next administration pay attention to us?”)

She said Samar and her home region, Bicol, are “cousins” because they share many socio-economic problems like poverty and direct hits from typhoons.

Bicol and Eastern Visayas, which includes the three provinces of Samar island and the Leyte provinces, are among the top five poorest regions of the country. Robredo and Pangilinan kicked off their visit to Samar with a meeting with religious groups in Calbayog City, followed by a courtesy call on Calbayog City Mayor Diego Rivera, who has not yet endorsed a presidential candidate.

She also met with Gandara town supporters, including recipients of 15 carabaos and livelihood cash aid in 2018, before attending the people’s rally at the Calbayog City Sports Complex.

Sarmiento shared why the Robredos are close to the hearts of Calbayognons: “When Mayor Ining (Reynaldo Uy) was killed in 2011, only [then] DILG secretary Jesse Robredo came. When Mayor Onald (Ronaldo Aquino) was killed last year, only Vice President Leni Robredo came.”

Nine police officers linked to the March 8, 2021 slay of mayor Aquino surrendered to the Philippine National Police (PNP) on February 15.

From Calbayog, to Catbalogan, the capital of Samar, to Northern Samar capital Catarman, Robredo promised to prioritize the development of Samar should she win as president.

The biggest crowd, which the provincial government said was 73,000 strong, was in Catarman. Rally organizers in Calbayog estimated the audience at 7,000 and the Robredo People’s Council-Catbalogan said they gathered 5,000.

Of the 24 mayors of Northern Samar, 21 endorsed Robredo’s presidential bid. They are the following:

She got loud cheers with her promise to complete the circumferential road connecting Las Navas in Northern Samar, Matuguinao in Samar, and Jipapad in Eastern Samar.

The cheers got louder when she pledged to improve telecommunications in the three Samar provinces.

(While traveling from Catbalogan to Catarman, I discovered something. Many places have no signal. That’s really difficult, right? Difficult for students, difficulty for workers. So one of my promises to you is we will do everything we can so that those places without signal would get signal.)

In Catbalogan City, Robredo’s afternoon rally was on the grounds of the Samar province capitol.

Governor Reynolds Michael Tan is backing the vice president’s rival, Ferdinand Marcos Jr. But Samar Vice Governor Angelica Gomez is for Robredo and welcomed the candidate during the rally.

As Robredo spoke at the Catbalogan rally, her audience broke into chants of “Waray 100K (There’s no 100K).”

It was a reference to the governor’s pledge to provide a 100,000-margin for Marcos in his province. The Vice President laughed as the chant was explained and quipped that they should say “100K minus one.”

Robredo also recalled her Angat Buhay projects in Northern Samar and on the entire island, saying she pushed these despite her office’s small budget.

“Pero bakit po namin ito nagagawa? Nagagawa po namin ito dahil maayos ‘yung pag-asikaso namin ng pera ng aming opisina, ‘yung maliit, napaparami natin. At napakahalaga po na may tiwala sa atin ‘yung tao,” she said. (How were we able to do this? We achieved it because of our careful handling of funds. So we managed to stretch the little we had.) – Rappler.com