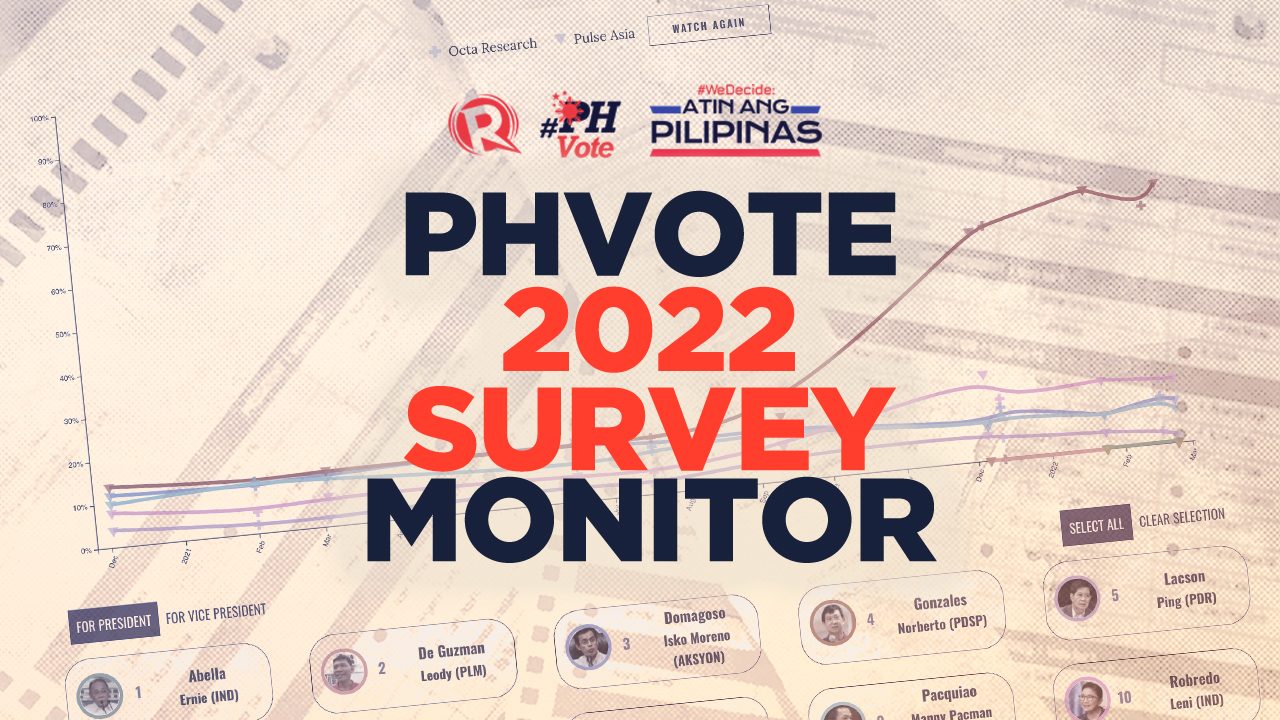 Way ahead of the 2022 election season in the Philippines, Rappler started tracking how public sentiments at different points in time were shaping the various races.

We present the data in this regularly updated page in such a way that they can inform readers’ appreciation of the polls the same way these have informed our reports and analyses since December 2020.

We feature the voter preference surveys of organizations which have made their methodologies and polls public and open for verification, such as Pulse Asia and OCTA.

Users can hover over the graph to see details about each survey. They can also select candidates to compare their survey performance. – Rappler.com

Ferdinand Marcos Jr. and Sara Duterte remain the frontrunners in the presidential and vice presidential races, respectively, according to the latest survey by OCTA Research.

In OCTA Research’s voter preference poll conducted April 2 to 6, around a month before election day, Marcos Jr. garnered 57%, up by 2 percentage points from 55% in OCTA’s previous survey in February. Vice President Leni Robredo was the choice of 22% of respondents, a 7-point increase versus the 15% she received in February. Manila Mayor Isko Moreno Domagoso got 9%, Senator Manny Pacquiao received 7%, and Senator Ping Lacson had 4%.

As for the vice presidential race, 57% of respondents chose Duterte, which was up by 14 points compared to what she got last February. Following her is Senate President Vicente Sotto III with 23%, a 10-point drop from February. In third place so far is Senator Francis Pangilinan, with 12%, up by 2 percentage points.

March 2022: Robredo gets surge in support among youth, elderly in Pulse Asia poll

The March 17-21 poll showed a 16-point rise in voter preference for the Vice President among 18- to 24-year-olds, an age group known as Gen Z. She now has a 30% score among these voters, compared to only 14% a month ago.

Marcos Jr., meanwhile, suffered a big drop in support among Gen Z, the age group that gave him the highest preference rating just last month. From February’s 71%, the former senator and dictator’s son dropped to 57%.

More elderly voters are choosing Robredo, as shown by the big 19-point rise in her rating among the 65 and up age group. Given the 14-point drop suffered by Marcos in this same category and the largely unchanged figures for other candidates, it’s likely that support shifted to Robredo.

Davao City Mayor Sara Duterte is still the frontrunner in the vice presidential race, according to the Pulse Asia survey held March 17 to 21.

Some 56% of respondents said they would elect her to the second highest post in the land if elections were held during the survey period. This is a 3-percentage-point rise from her numbers in late February 2022.

At third place is Vice President Leni Robredo’s running mate, Senator Francis “Kiko” Pangilinan, who saw his numbers rise from 11% in February to 15% in March. Like Robredo, Pangilinan saw a rise in his numbers across all locations and all socio-economic classes, save for the National Capital Region.

Ferdinand Marcos Jr. kept his lead in the 2022 presidential race, while closest rival Vice President Leni Robredo saw her numbers rising by 9 percentage points, according to the Pulse Asia survey on voters’ preference held from March 17 to 21, 2022.

Marcos Jr. saw his numbers drop across four locations – Metro Manila, Balance Luzon, Visayas, and Mindanao – even as he kept his lead. Robredo, meanwhile, saw her numbers rise dramatically in all locations, save for the National Capital Region.

The last two election surveys of Pulse Asia – January 2022 and February 2022 – include only respondents from classes C, D, and E, and none from the two highest classes, A and B.

“None of our randomly selected respondents could be classified as Class AB,” explained Ronald Holmes, Pulse Asia president, in a message to Rappler on March 14, the day the results of the February 18-23 survey was released to the public.

Bautista was the new name, placing last in the so-called Magic 12, with 32.8% rating. Reelectionist Risa Hontiveros of opposition Akbayan and former senator JV Ejercito are above the red line because their ratings, 32.3% and 31.6% respectively, are still considered at 12-14.

Broadcaster Raffy Tulfo, who made a name for his program addressing common people’s legal woes, retained the top spot at 66.9% rating. Loren Legarda and Mark Villar, also part of the Uniteam slate, are second and third with 58.9% and 56.2% ratings, respectively.

Ferdinand Marcos Jr.’s continued dominance in surveys may be, in large part, due to the country’s youngest voters.

Pulse Asia’s February survey showed that 71% of Filipinos aged 18 to 24 want the dictator’s son and namesake to be the next president. Generation Z or Gen Z – as this age group is popularly called – was the age group with the highest preference rating for the 64-year-old presidential candidate.

It was the same story for the next youngest sectors of the population. Among 25- to 34-year-olds and 35- to 44-year-olds, Marcos was the top choice of 63%. For older Filipinos, Marcos was still the first pick of most, but his ratings among these age groups were in the vicinity of 50%.

The late dictator’s son Ferdinand “Bongbong” Marcos Jr. and his running mate, presidential daughter Sara Duterte, maintained their leads over their closest rivals, according to the poll conducted by Pulse Asia from February 18 to 23, 2022.

Nationwide, 60% of respondents said they would vote for the former Ilocos Norte governor. Marcos Jr’s number remained unchanged from January 2022.

Vice President Leni Robredo was a distant second, with 15% of respondents saying they would pick the lone woman in the presidential race. It is one percentage point down from her January numbers, although it’s within the error margin of the survey for national results.

In the VP race, Duterte was preferred by 53% of respondents. Senate President Vicente Sotto, who trails Duterte, saw a 5-percentage point drop in his numbers, with only 24% of respondents choosing him. Robredo’s running mate, Senator Kiko Pangilinan, was third at 11%, while fellow vice presidential aspirants Willie Ong got 6%.

Dictator’s son Ferdinand Marcos Jr. continued to pull away from his rivals in the latest Pulse Asia survey on the 2022 elections released on Sunday, February 13, with 60% of respondents nationwide choosing him as their preferred presidential bet.

The survey, conducted from January 19 to 24, showed the son and namesake of the late dictator Ferdinand Marcos sustaining his lead, gaining 7 percentage points from Pulse Asia’s December 2021 survey, where he was the top choice for 53% of respondents.

Still in second place was Vice President Leni Robredo, who was the favored candidate of 16% of respondents. Compared to Pulse Asia’s December survey, backing for Robredo fell by 4 percentage points.