Facebook Twitter Copy URL
Copied
Throngs of Robredo-Pangilinan supporters flock to a park and occupy roads around it despite the absence of many big names in Butuan City and Agusan del Norte politics, and the threat of a downpour 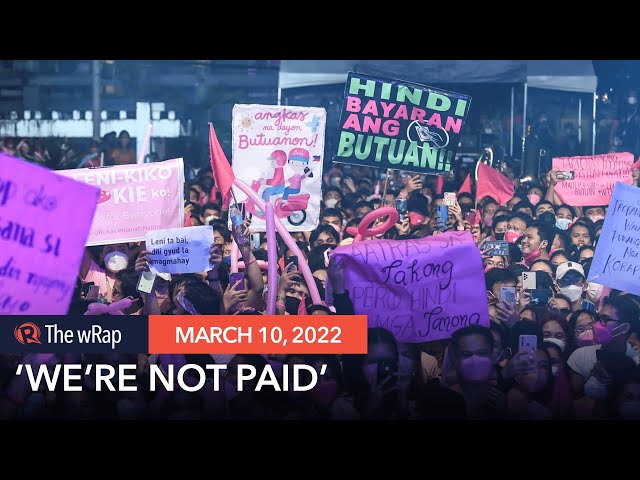 The crowd spilled over to the roads around the park near the Saint Joseph Cathedral during the evening rally that concluded a two-day campaign sortie of the ticket of Robredo and her running mate Senator Francis Pangilinan in Caraga region.

Robredo’s supporters started gathering at the park early in the afternoon, hours before the rally, despite the dark clouds and threat of a downpour. It rained the previous night, and there was a light shower on Wednesday afternoon.

Joseph Ian Sabado, one of the organizers of the event, said his group estimated the crowd at Guingona Park and the roads around it to reach more than 10,000, causing traffic jams.

The crowd was already loud even while they were waiting for Robredo to come. They cheered, chanted her name as soon as she stepped down from a van, and slowly squeezed her way toward the stage, through a throng of political supporters who were standing shoulder to shoulder.

As soon as Robredo stepped on stage, a woman suddenly rushed to the Vice President to hug her and have a selfie, and did the same with Pangilinan – a common scene in her campaign sorties.

‘Why would they compare us to lying trolls?’

The crowd continued their “hindi kami bayaran” chant, obviously in response to the allegation of Cavite 7th District Representative Jesus Crispin “Boying” Remulla that some of those who attended the tandem’s packed campaign rally in Cavite on March 4 were paid.

(Those people belittle the people who support Ma’am Leni. Why would they compare us to lying trolls?)

Pangilinan said there was an “avalanche of disinformation” on social media that should be countered with the truth, especially by the youth, in the weeks leading to the May elections.

Fortun, for his part, said, “Amid all proliferation of lies and deceit in all forms of media, those of us who know the mistakes of the past should step up and help in any way we can to see to it that the coming elections result in choices anchored on truth and justice, lest we fall into the quagmire of repeating the dark moments of our history.”

Robredo said the fight against disinformation can be done with patience, compassion, and understanding.

“Chill lang tayo (Let’s be cool),” said the Vice President, who has been in an uphill battle against efforts to discredit her online since she won the vice presidency in 2016.

In 2018, she launched a video series on Facebook to debunk the lies. Fact-checking initiative Tsek.PH said in February that since the start of January 2022, Robredo is the biggest victim of disinformation carrying negative messaging while fellow presidential hopeful Ferdinand Marcos Jr. is the biggest beneficiary of disinformation carrying positive messaging.

The rally was so far the biggest in Butuan City since the start of the election period, said Butuan-based journalist Erwin Mascarinas.

“I’ve never seen a rally like that in the city in years,” said Mascarinas, referring to the crowd size and the display of fervor by the supporters of the Robredo-Pangilinan ticket.

Waving hands and pink flags, and happy faces made a ripple effect across the large crowd of screaming political partisans who were mostly in pink, the color associated with the Robredo-Pangilinan campaign.

The crowd was full of energy and the atmosphere was festive especially when Rivermaya took the stage after Robredo’s speech and performed its hit songs.

The crowd, full of energy, sang in chorus with the band: “Isigaw mo sa hangin / Tumindig at magsilbing / liwanag / liwanag sa dilim (Shout in the air / Stand up and serve as light / Light in the darkness).”

“That (turnout) was more than what we expected,” said Fortun.

Fortun, who is running for Butuan vice mayor under the group of reelectionist Mayor Ronnie Lagnada, has openly declared his support for Robredo days before the rally in Butuan. But Lagnada has kept mum about who among the presidential candidates he was supporting or if ever he planned to do so.

Before she was elected vice president in 2016, Robredo served as the representative of Camarines Sur’s 3rd District. She and Fortun were neophyte members of the 16th Congress starting in 2013.

“I was able to observe her up close and saw her modesty and humility, her deep love for our country, the goodness of her heart, and how hard she worked. You would see her participating actively and adeptly in committee work and plenary sessions. She worked from morning till night without any fanfare and grandstanding,” Fortun recalled.

He also said Robredo’s record on people’s participation and empowerment, transparency and accountability, environment, and economy was indicative of “a leader with a firm grasp of the country’s pressing issues and the most important and urgent reforms that need to be instituted to address these issues.” – Rappler.com