Facebook Twitter Copy URL
Copied
'If these perpetrators are not unmasked and prosecuted...other persons might be subjected to the same vicious and criminal acts,' says Tricia Robredo 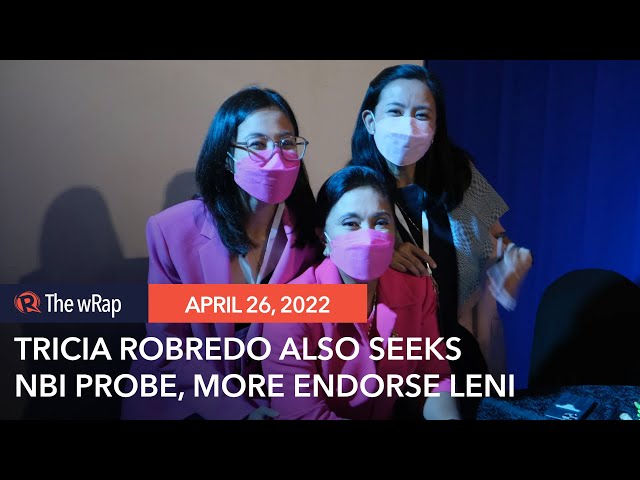 MANILA, Philippines – Doctor Tricia Robredo, the second eldest daughter of Vice President Leni Robredo, asked the National Bureau of Investigation (NBI) to look into the spread of fake lewd videos of her online.

In a statement on Tuesday, April 26, the Robredo camp said Tricia, through her lawyer Pinky Bernabe, sought the NBI’s assistance to determine possible cybercrimes committed against her, through a letter dated Friday, April 21.

Bernabe said the use of her client’s name in these posts should be considered as gender-based online sexual harassment under Republic Act No. 11313 or the Safe Spaces Act.

“If these perpetrators are not unmasked and prosecuted before the courts, other persons might be subjected to the same vicious and criminal acts,” read the letter of Tricia, who has been spending the past weeks acting as a surrogate of her mother on the campaign trail.

Robredo’s camp and political pundits believe the intensified black propaganda against the lone female presidential candidate and her family signifies Robredo’s growing momentum in the crucial homestretch of the campaign. Tricia is hoping the NBI would be able to identify the main source of the fake video scandal, as well as the usernames, accounts, and IP addresses of the perpetrators.

She and her lawyer attached preliminary links that the NBI may find useful in its investigation.

“Our client is never one to seek special treatment. We hope the NBI would identify the perpetrator/s behind these posts,” said Tricia’s lawyer Bernabe.

Aika, Tricia, and their youngest sister Jillian have been leading Robredo supporters’ house-to-house efforts across provinces to help convince more voters to choose their mother for president on May 9.

The Integrated Bar of the Philippines earlier reminded candidates not to use women to gain votes or smear their opponents. – Rappler.com