Over 3,000 Manileu00f1osu2014women, youth, LGBTQIA+ and other sectorsu2014marched from Espau00f1a Boulevard to Plaza Noli in Sampaloc, Manila on Wednesday, March 2, to celebrate Womenu2019s Month and to declare their support for Vice President Leni Robredou2019s presidential bid. Robredo expressed admiration for the energy and dedication of the crowd and asked her supporters to help fight disinformation in the coming presidential elections. She joined the event organized by the Robredo Peopleu2019s Council Manila after earlier attending Ash Wednesday services and meetings with various groups. (VP Leni Media Bureau)

Facebook Twitter Copy URL
Copied
Among those at the rally for the Robredo-Pangilinan tandem in Sampaloc, Manila, are first-time voters who say they want their voice to be heard

MANILA, Philippines – Under the heat of the blazing sun in the nation’s capital, young Filipinos marched as if they were headed to a grand street party. 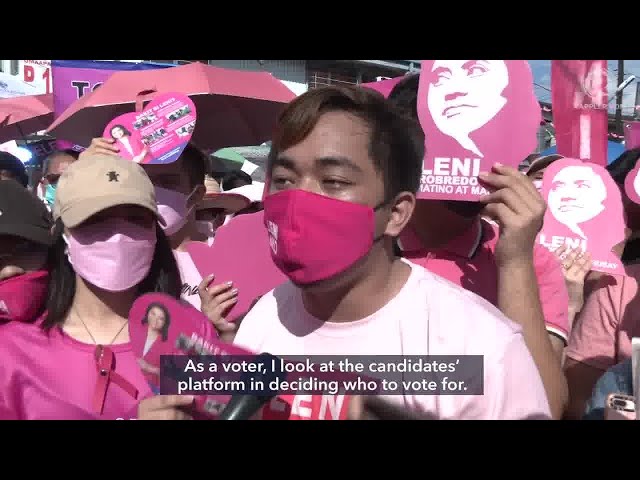 They waved their pink flags and balloons to the beat of the drums leading the charge towards Plaza Noli in Sampaloc, Manila, where the youngsters were out to prove that presidential candidate Vice President Leni Robredo was not alone in enemy territory.

Organizers said some 3,000 people showed up for Robredo and her running mate Senator Kiko Pangilinan on Wednesday, March 2, in the bailiwick of Mayor Isko Moreno.

First-time voter Aecis Endaya, 19, told Rappler that being a homegrown Manileño does not automatically mean a vote for his local chief executive to become president.

He’d rather vote for the lady in pink – and so did a number of his friends who wore matching Leni-Kiko shirts, all gathered in front of the stage.

(Just because he’s the mayor here, it doesn’t mean that he got my heart already. As a voter, I look at the candidates’ platform in deciding who to vote for. And right now, I have not seen any other candidate with a more concrete platform than VP Robredo.)

Robredo, who has earned the moniker “Queen of Receipts” on social media after her stellar CNN Philippines debate performance, has been presenting the Office of the Vice President’s highly praised anti-poverty and pandemic response programs as clear proof of what she can bring to Malacañang if she wins in May.

Robredo’s “resibo” or proof of leadership skills coupled with her corruption-free track record are the things that have drawn the young crowd that gathered for her in Manila, many of whom would vote for the first time in May.

Mich Salvador told Rappler that he learned a lot about Robredo’s call for radical love. The 22-year-old had to apply it on his own family, as his parents initially wanted to support another candidate.

For Salvador, the youth are a force to be reckoned with in 2022.

(I think that VP Leni Robredo has a higher chance of winning in Manila because first of all, many of the youth who could not vote then can cast our vote now.

Salvador is a registered voter in Bulacan, but currently resides in Manila as a student of the state-run Pamantasan ng Lungsod ng Maynila.

His schoolmate, Dean Cadalin, was just as hopeful. It was her first time attending a campaign rally and their group of friends came prepared. When Rappler saw Salvador and Cadalin, they were holding up a sign that read, “Fuck the patriarchy, Swifties for Leni.”

They are big fans of two influential women: American singer-songwriter Taylor Swift and the Philippines’ very own Robredo, a Swiftie like her supporters.

Beating the odds in Manila

Robredo has odd chances in Manila, where 1.13 million votes are up for grabs.

Apart from being a stronghold of Moreno, Manila has a record of choosing another male candidate now running for president. In the tight 2016 vice-presidential race, over 390,000 Manileños chose the late dictator’s son and namesake Ferdinand Marcos Jr. over Robredo, who got only around 183,000 votes.

As expected, no incumbent Manila official shared the stage with Robredo on Wednesday, but she found key allies in former representative Sandra Ocampo and Manila 1st District congressional candidate Atong Asilo of the Liberal Party, which Robredo chairs.

They worked with local volunteers from Team Leni Robredo and the Ina ng Bayan Oganization to make the Plaza Noli rally a reality.

Volunteers from the Pink Positive Movement, for example, were going around Plaza Noli during and after the program to hand out fliers that would direct people to a free online campaign training platform so they can help boost Robredo’s chances.

Ocampo even performed a Women’s Month flash mob choreography with members of the progressive party-list group Gabriela, their Zumba-like dance moves a homage not just for Robredo, but for women everywhere.

What Kakampinks may lack in numbers of Manila, they made up for through their energy and witty slogans. Robredo spent the first 12 minutes of her speech just reading out the handmade posters of her supporters. 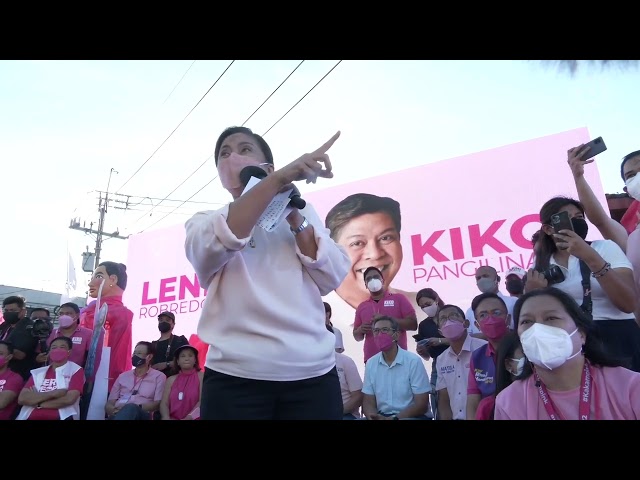 Some Kakampinks held up a sign, “Mga Anak ng BBM Supporters for Leni,” meaning their parent are backing Marcos instead. Robredo told them, “May assignment kayo ha (You have an assignment okay)?”

The other captions made Robredo laugh out loud. One called her “LeNicki Minaj,” a nod to her debate performance.

Others had playful undertones. In reading a poster saying “Sa gobyernong tapat, madidiligan lahat,” Robredo joked that her Kakampinks would get in trouble. In English, this poster caption meant that under Robredo’s honest government, everyone would have a better sex life.

The lone female presidential candidate has made it a habit to read out loud the captions of these posters, because she said these are the labor of love of her Kakampinks.

In her speech, Robredo acknowledged her uphill climb to the presidency. But she continues to draw strength from her passionate supporters, who have been running a bottom-up, people-led campaign for her.

Robredo had been reluctant candidate, deciding to run only in the middle of the candidacy filing in October 2021. She remains a far second placer to Marcos in major pre-election surveys, their gap reminiscent of Robredo’s tough climb to the vice presidency in 2016.

But she rallies her Kakampinks to keep on going.

(I know that we have a lot of catching up to do, but like what happened in 2016, as long as we’re together in this fight, nothing is impossible. Money nor machinery does not match the might of a united people.) – Rappler.com