MANILA, Philippines – Outgoing Justice Secretary Menardo Guevarra said on Thursday, June 9, the panel investigating the killings of nine activists in Calabarzon – an incident eventually known as Bloody Sunday – will exert their “best efforts” to resolve the cases before their term ends.

Nine activists and peasant leaders were killed in simultaneous raids in their homes and offices in March 2021. Law enforcers, who were implementing search warrants, claimed the victims fired shots at them and had to be neutralized, consistent with the narrative of “nanlaban” or fighting back common in drug war cases.

The Department of Justice or DOJ’s AO 35 panel – a panel focused on extrajudicial killings (EJKs) and politically-motivated harassments – has so far filed murder charges for only one of the nine cases.

“We’ll give it our best efforts [to resolve] what is ripe for resolution,” said Guevarra without expounding.

The group Defend Southern Tagalog had called on Guevarra to expedite the cases, especially the killings of couple Chai and Ariel Evangelista. When the DOJ filed murder charges for the killing of Cavite union leader Manny Asuncion in December 2021, it said the Evangelistas’ report would be out in two weeks, but none had been released yet.

“We urge outgoing DOJ Secretary Menardo Guevarra to wrap up the investigation and proceedings relating to the AO35 committee-sponsored charges against the police and military officers culpable in killing Asuncion, and Chai and Ariel Evangelista. 450 days after Bloody Sunday is a delay long enough,” the group said in a statement.

The group was wary of the future of the investigation under incoming justice secretary Jesus Crispin Remulla, whom the group said was “still unapologetic in his red-tagging” of the supporters of Vice President Leni Robredo during the campaign.

Guevarra said the AO 35 panel was discussed during his meeting with Remulla on Thursday, “but only as part of the law enforcement cluster.” He said the probe was “duly noted by the incoming secretary.”

Remulla, when interviewed by reporters after the meeting, did not give much details about the discussion.

In an earlier interview with Rappler Talk, Remulla said he was open to studying an amnesty for jailed and charged activists. But when asked about red-tagging, Remulla still answered by linking activists to the armed rebels, and said, “I don’t know if that is red-tagging.”

Remulla also did not agree with the assertion that red-tagging was dangerous, as people who had been killed were also red-tagged. In the same interview, Remulla called Asuncion an “identified helper” of armed rebels. 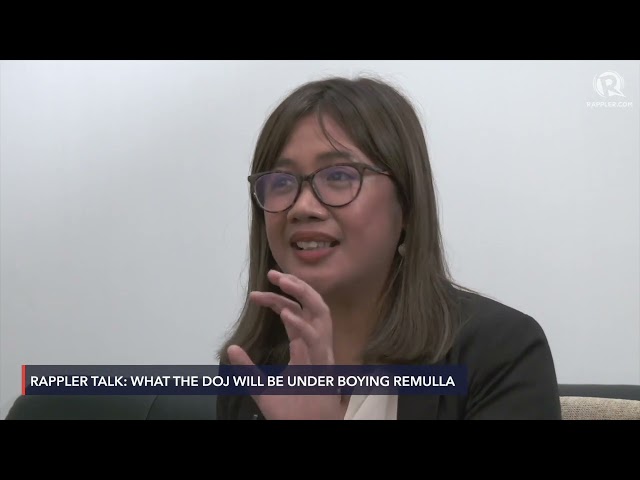