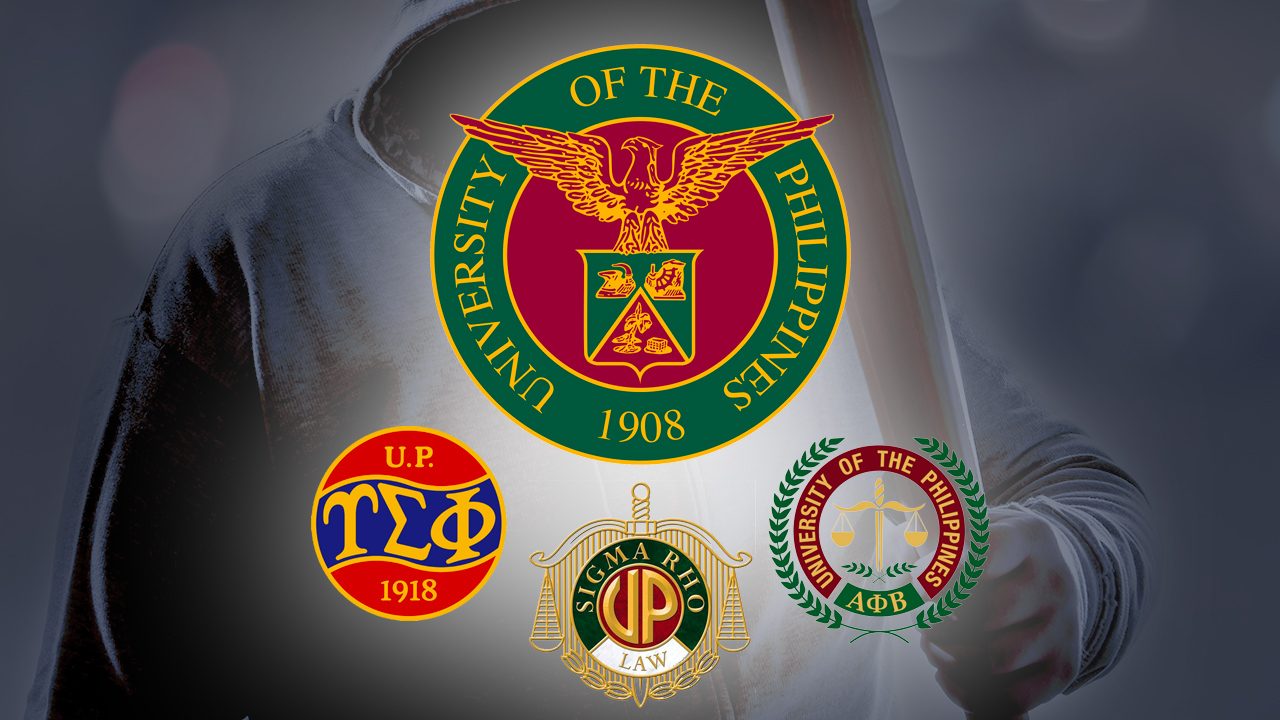 Facebook Twitter Copy URL
Copied
As a new hazing incident revives calls to hold fraternities accountable for violent acts, Rappler looks back at some major cases in the University of the Philippines

MANILA, Philippines – Fraternity-related violence in the country’s premier state university is once again in the spotlight after the now-suspended Twitter account @UPSILONLEAKS leaked images and videos of a hazing incident on Sunday night, July 3.

The claim, echoed by a second Twitter account, prompted the University of the Philippines Diliman – University Student Council to urge university officials to launch a “fact-finding and investigation.”

The leaks also revived calls within the UP community to abolish fraternities and hold members accountable for their violent actions.

The 2017 death of Horacio “Atio” Castillo III, a neophyte of the Aegis Juris fraternity based in the University of Santo Tomas prompted the passage of the Anti-Hazing Act of 2018.

Even after enactment of the law, UP fraternities like the Upsilon Sigma Phi and Sigma Rho continued to be embroiled in violent incidents.

Rappler looks back at some major cases of hazing and fraternity violence in UP.

The first recorded hazing death in the Philippines was Gonzalo Mariano Albert, a neophyte member of Upsilon Sigma Phi. Albert died in the emergency room from a burst appendix.

The late president Ramon Magsaysay created a committee to investigate and determine whether the beating Albert received from his Upsilon brothers led to his death.

Magsaysay’s executive secretary Fred Ruiz Castro led the investigation, reviewing the medico-legal report on Albert and interviewing 100 witnesses on a wide range of topics such as rituals of membership and university policies on initiations.

The committee concluded that the beating Albert received “weakened his physical condition prior to the [appendix] operation.”

“The Castro Committee may have failed in its quest to change the brutal fraternity culture at the UP, but what it wrote about that culture was quite revealing because of the enormous amount of information it was able to collect from its respondents…. When asked by the Committee as to the fraternities’ role in UP life, the respondents were unanimous in their answers: they existed because they desired power,” Abinales wrote.

Dennis Venturina, a UP law student and member of the Sigma Rho Fraternity, was attacked by rival Scintilla Juris fratmen carrying baseball bats and lead pipes on December 8, 1994. He died two days later.

The National Bureau of Investigation (NBI) concluded after an autopsy that Venturina died from traumatic head injuries. The findings showed he had generalized hematoma on the back of his skull, several fractures on the head, and inter-cranial hemorrhage.

They were sentenced to reclusion perpetua or a prison sentence of up to 40 years.

The Supreme Court (SC) affirmed the guilty verdict in June 2014. It also found the five accused guilty for the attempted murder of five Sigma Rho members who sustained injuries during the attack.

“Fraternity rumbles exist because of past impunity…. The perpetrators must stand and suffer the legal consequences of their actions. They must do so for there is an individual who now lies dead, robbed of his dreams and the dreams of his family,” Associate Justice Marvic Leonen wrote in his majority decision.

The five convicted students were later released from prison under the good conduct time allowance law.

Alexander Icasiano, a public administration student at the UP Diliman and former chair of the Sanlakas Youth UP Diliman, died on August 16, 1998 during initiation rites of the Alpha Phi Beta fraternity.

Doctors who attended to Icasiano’s body in the emergency room observed welts and bumps on his arms, shoulders and legs, suggesting that he was beaten with a hard object.

The minutes of the Board of Regents’ August 27, 1998 meeting cited an August 26 hearing by the Student Disciplinary Tribunal, which found probable cause that Alpha Phi Beta officers were guilty for Icasiano’s death.

UP Diliman officials also spoke to heads and faculty advisers of fraternities, sororities, and student organizations to discuss tighter enforcement of rules on student conduct and discipline.

Alpha Phi Beta members involved in the incident were convicted and sentenced to up to two years in prison. Icasiano’s mother, Corazon, later said that she had learned to forgive the men who hurt her son. (READ: Families of victims shed tears as Congress OKs bill banning hazing)

APO members Dandy L. Dungo and Gregorio A. Sibal Jr. brought Villanueva to the Jose P. Rizal Memorial Hospital, where he was declared dead. The two identified themselves as Jericho Paril and Brandon Gonzales in the hospital logbook.

Doctors who attended to Villanueva’s body noticed that he was motionless, not breathing, and had no heartbeat. They also noticed large contusions on his face and legs.

Police charged Dungo and Sibal for violation of Republic Act 8049, known as the Anti-Hazing Act of 1995. A Calamba City regional trial court found Dungo and Sibal guilty and sentenced them to reclusion perpetua.

Dungo and Sibal filed an appeal, saying that the prosecution did not establish their guilt beyond reasonable doubt. The Court of Appeals later affirmed the trial court’s decision.

The appeal was later elevated to the SC, with the high court affirming the same decision and penalty of reclusion perpetua.

According to the SC decision penned by former associate justice Jose Catral Mendoza: “With the fact of hazing, the identity of the petitioners, and their participation therein duly proven, the moral certainty that produces conviction in an unprejudiced mind has been satisfied.”

Mendez was brought to the Veterans Memorial Medical Center at 1:08 am but was declared dead on arrival. An autopsy of Mendez’ body concluded that the student died due to traumatic injuries to various parts of his body.

Following the incident, UP officials placed officers of Sigma Rho under preventive suspension.

The UP Student Disciplinary Tribunal also filed administrative charges against 13 UP students and members of the Sigma Rho fraternity, who allegedly took part in the hazing of Mendez.

The Quezon City Regional Trial Court nullified the proceedings, but the decision was later reversed by the Court of Appeals on October 6, 2015.

“The preliminary inquiry and the formal charges herein are but components of the investigative and disciplinary action an academic university is mandated to take against its students suspected of being engaged in hazing activities,” the court said in its resolution.

Upsilon Sigma Phi was responsible for a hazing incident that severely injured a 17-year-old student in 2014.

Former UP Diliman Chancellor Michael Tan confirmed reports of a hazing incident on July 3, 2014 with a statement on the UP Diliman’s official Facebook page. He later confirmed Upsilon’s involvement in the incident and revealed that the victim was a minor. He added that the family of the victim would take legal action against the fraternity.

The incident came on the heels of public outrage against fraternity-related violence after Guillo Cesar Servando, a sophomore student at the De La Salle-College of St. Benilde, died during a Tau Gamma Phi hazing.

In a Facebook post on February 29, 2016, a UP graduate shared her experience with acts of physical and verbal abuse in 2011 while she applied for membership in a student organization. The name of the organization was not specified in the post, which went viral.

Following the post, the College of Mass Communication of UP Diliman (UP CMC) condemned the “dehumanizing practices of hazing” shared by the alumna in the post.

“If this can be part of the healing process, we therefore encourage her, as well as others who had undergone similar experiences, to file official charges so that a thorough investigation into the matter may be done and warranted sanctions imposed,” UP CMC said in their statement.

UP was rocked by succeeding days of fraternity violence between the Alpha Phi Beta and Upsilon Sigma Phi in November 2018.

The UP Law Student Government received reports of an altercation at Palma Hall on November 13, with one victim identified as a first year evening student of college.

The following day, students initially mistook a car chase between the two groups as a shooting incident. Some of the students involved sustained minor injuries and were brought to the university infirmary.

Former UP Diliman vice chancellor for student affairs Jerwin Agpaoa told Rappler that Upsilon and Alpha Phi Beta reached a “truce” following talks brokered by the UP Alumni Association and the fraternities’ elders.

Shortly after, a series of screenshots of offensive private chats from Upsilon members – dubbed as #LonsiLeaks – were leaked shortly after the fraternity’s November 18 centennial anniversary.

Following the incidents, two members of the University of the Philippines-Diliman University Student Council (USC), including USC chairperson Yael Toribio, resigned from their posts.

UP President Danilo Concepcion, a member of Upsilon, promised in a statement to “root out [the] problem” of fraternity violence. He added that he would “not protect any fraternity brother who may be found culpable of these kinds of offensive acts.”

He instructed Tan to expedite the investigation on the November brawls and required student organizations to undergo gender sensitivity training before their accreditation or renewal is granted.

Cases were later filed by the UP Police and the school’s disciplinary council on December 10 against the students allegedly involved in the November 13 incident.

On September 26, 2019, it was the Sigma Rho’s turn to be featured in leaked conversations around what seemed to be a hazing ritual.

The photo that sparked outrage online was that of a person whose face and arms were covered with bruises.

Among the personalities mentioned in the leak was USC students’ rights and welfare councilor Tierone Santos, who was later placed under preventive suspension pending further investigation.

USC council members elected Santos as USC vice chairperson in October 2020, drawing flak online from members of the UP community for the display of impunity. He resigned after 10 of the 13 council members who voted for him withdrew their vote.

Following the leaked chat, a fraternity member died, prompting Tan to call for a halt to the posting and forwarding of social media messages about the incident. fraternities in the Philippines

After leak of lewd messages, UP Visayas fraternity expels 12 members