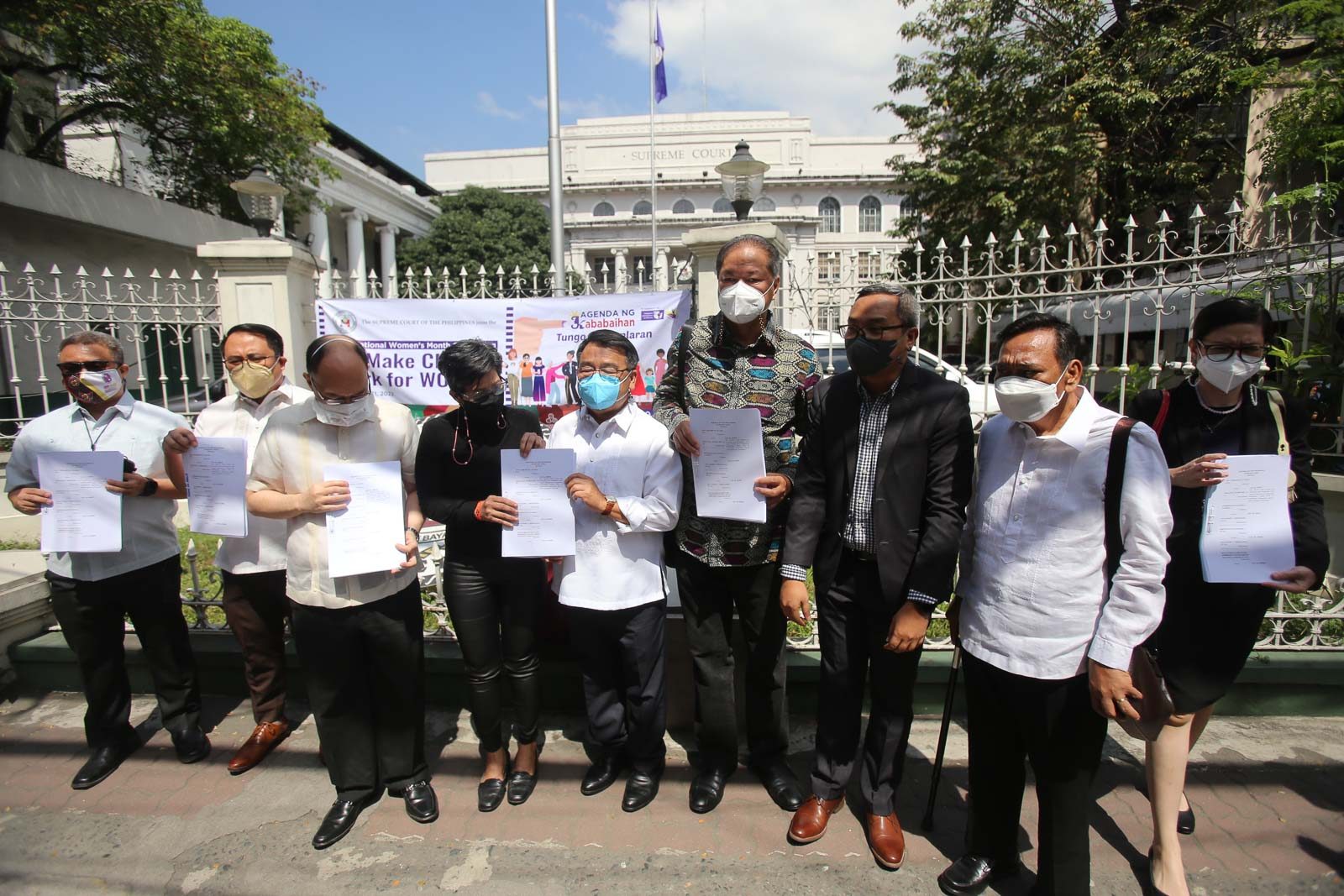 Petitioners of the Anti-Terror Law troop to the Supreme Court in Manila to file a Joint Motion for Reconsideration on the high court decision that largely held the law to be unconstitutional on March 2, 2022. Rappler

MANILA, Philippines – Lawyers once again banded together in an unprecedented move to start the appeal process of the feared anti-terror law, filing a joint motion for reconsideration on Wednesday, March 2, before the Supreme Court.

Twenty six out of the total 37 petitioners joined the collective motion, highlighting clauses in the law that were decided narrowly. A couple of these are the so-called ambiguous recruitment clause under Section 10, and the arbitrary mode of designation under Section 25.

The warrantless arrest and prolonged detention powers under Section 29 were upheld in a not-so-close vote, but lawyer Howard Calleja said it does not mean it is hopeless.

“That is why we are citing our jurisprudence, the law, our rights to knock on the good senses of the justices, the independence of the Supreme Court, that they would take a second look not for any other reason, but for the benefit of the Filipino nation, and the institution,” said Calleja.

Tony La Viña made an impassioned appeal to the Supreme Court to “consider the deadly consequences” of the law, as his client and Lumad teacher Chad Booc, red-tagged for years, was killed last week in what his groups call as murder by soldiers. The military, however, claimed that it was the result of an encounter with armed communist rebels.

Among the issues with close votes was retaining the phrase “organized for the purpose of engaging in terrorism” in the provision under Section 10 that punishes recruitment to a terrorist group. Six justices wanted to delete the phrase, calling it ambiguous and open to fabrication, but nine justices including Chief Justice Alexander Gesmundo prevailed.

The voting was closer on designation, 8-7, which upheld the third mode or the arbitrary power of the anti-terror council to designate someone as terrorist based only on their own determination and without hearing.

On both voting, the ponente Associate Justice Rosmari Carandang voted in favor of the petitioners, but she had retired, so the petitioners had practically lost one vote. Carandang was replaced by former elections commissioner Antonio Kho Jr. They can also potentially lose Senior Associate Justice Estela Perlas-Bernabe who voted in favor of them on some issues, as she is retiring May 15.

Petitioners did not want to identify justices whom they think they can swing. In their opening statement, the petitioners said: “There are parts of history that must not be repeated, especially those that led to horrendous arrests, disappearances, tortures and deaths,” referring to atrocities under the military rule of the late dictator Ferdinand Marcos.

“The very Constitution that this Honorable Court protects and serves is the same one that was heavily inspired by the desire of the Filipino people to never again be subjected to the abuses that characterized the Marcos constitutional authoritarianism,” said the petition.

That was also the tenor of the separate opinion of Associate Justice Benjamin Caguioa, who voted to strike down Section 29 on 24-day detention, saying the Constitution precisely said three days maximnum in a state of martial law “to prevent a repeat of the atrocities that happened during martial law under Ferdinand E. Marcos.”

The son of the dictator, Ferdinand “Bongbong” Marcos Jr, is the current survey frontrunner in the presidential elections, and has given an all-out support for the National Task Force to End Local Communist Armed Conflict or NTF-ELCAC. The task force is behind the vicious offensives, legal or by publicity, against activists, organizers and even political dissenters.

“Human lives are at stake here, our liberty is at stake here, we are being silenced and we cannot just imagine another Duterte or another Marcos would be in position and we have the anti-terror law. All the more that the definition of terrorism should be well defined,” said women’s rights lawyer Virigina Suarez.

The lawyers who filed on Wednesday were Calleja, La Viña, Suarez; Neri Colmenares, Ephraim Cortez, Edre Olalia and Josa Deinla of the National Union of Peoples’ Lawyers (NUPL), and Randall Tabayoyong of the Integrated Bar of the Philippines (IBP).