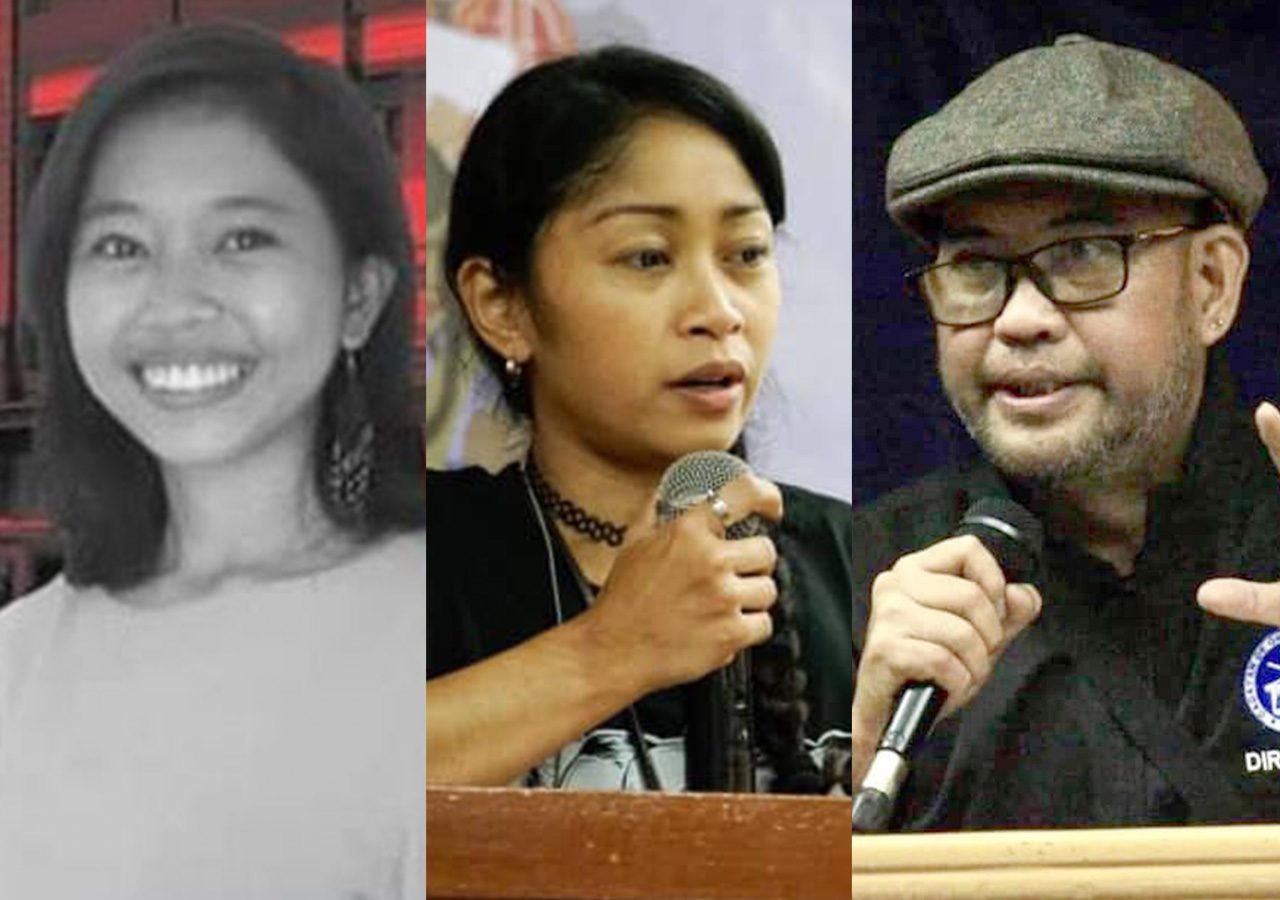 UNDER ATTACK. Filipino journalists in jail, facing cases, and confronting red-tagging remain undaunted and commit to giving voice to all victims of human rights violations.

Activists across the country also remember her live-streaming the raid on Facebook, and her calm announcement that the joint police and military team were “planting evidence” in the garden of the office compound.

Kruger’s presence of mind came from the training she underwent to become editor of Paghimutad, the Negros Occidental news outfit that is part of the country-wide Altermidya Network.

Her starkest memories from the period are staring at the walls of her detention cell, worrying about the plight of her six children, and praying they would overcome the trauma of a hands-on mother suddenly disappearing from their lives.

Kruger, who worked in the business process outsourcing (BPO) industry and still helped BIEN Philippines with communications and organizing work, spent 12 days in detention before being freed on bail on charges of illegally possessing firearms.

“My husband was out of town visiting his family when I was arrested, and he couldn’t go back because he was also being red-tagged by the police and military,” Kruger told Rappler in an interview on Friday, December 9.

“It’s a good thing aunts from his family immediately came to get the children, flying them to family in Manila for their protection,” she added.

At one point, the attackers even included his wife, Ailyn, and son Lynyrd Aleksei, an employee of the Commission on Elections.

“They’ve red-tagged everyone in my house,” Corrales quipped in 2021 during a social media blitz calling him a terrorist.

Corrales, in the latter half of former president Rodrigo Duterte’s term, routinely saw his face on posters pasted on trees, posts, and city walls. At one point, he was called the most red-tagged journalist in Cagayan de Oro City

Kruger and Corrales believe that press freedom and human rights are intertwined.

“There is a reason why dictators and tyrants in contemporary political history target the free and independent press. Truth-tellers have always been anathema to those who violate human rights,” Corrales told Rappler on Saturday, December 10, the International Day of Human Rights.

While Corrales is sometimes tempted to laugh off the attacks, the murder of broadcaster Percy Lapid on October 3 in the middle of a busy street in suburban Metro Manila has increased tensions among threatened journalists.

Mabasa was the 197th journalist killed in the Philippines since 1986, according to the NUJP. Another broadcaster, Negros Oriental-based Rey Blanco was stabbed to death on September 18.

The Mabasa killing, the NUJP said, showed “how brazen the perpetrators were.”

Among the accused in the Mabasa case is suspended Bureau of Corrections (BuCor) Director General Gerald Bantag and BuCor superintendent Ricardo Zulueta.

The NUJP in 2021 said that state security forces have been linked to at least a third of the killings of journalists since 1986.

Police and military official social media accounts have been heavily engaged in red-tagging, which have preceded the killings of around 300 activists in the six years of Duterte’s rule, according to the human rights group Karapatan.

Kruger’s motion pointed out the arrest warrant carried the wrong address and questioned, like many activists have, the Quezon City judge’s capacity for issuing mass warrants.

Burgos-Villavert was also the judge who issued a warrant that led to the arrest of Manila Today editor Lady Ann Salem and trade unionist Rodrigo Esparago in February 2021.

The two were released in March after Presiding Judge Monique Quisumbing-Ignacio dismissed the charges of illegal possession of firearms and explosives against them.

“Even the barangay officials who accompanied the police said the raid should stop once they saw the wrong address,” Kruger said. “But who listens to civilians?”

“I’m disappointed but we will carry on,” added Kruger, who left Bacolod because of the series of killings of other red-tagged activists like her friend, Zara Alvarez, who was shot dead on August 17, 2020.

Eastern Vista editor Frenchie Mae Cumpio was arrested in February 2020 arrest at the news outfit’s staff house during a series of raids very similar to the Bacolod sweep of activist offices.

“In my own country, 23 year old Frenchie Mae Cumpio, still in prison after nearly 2 years, and just 36 hours ago the news that my former colleague, Jess Malabanan, was shot dead,” Ressa said after saying that she came as “a representative of every journalist around the world who is forced to sacrifice so much to hold the line, to stay true to our values and mission: to bring you the truth and hold power to account.”

Kruger, Salem, and Cumpio experienced the same pattern used to arrest legal activists in a strategy aimed at linking them to the armed communist rebellion.

“First there is a search warrant. Then a raid. Then the police find explosives,” Rappler Cebu correspondent Lorraine Ecarma wrote during Cumpio’s first anniversary as a political detainee.

Now working as an anchor for Altermidya’s digital news channel, Kruger continues to report on people’s issues like labor rights, health, housing, and the continuing harassment experienced by activists and other opposition groups.

There was a time she mulled over the advice of relatives and friends to turn back on her journalism advocacy.

“But I think of my children. What kind of world will I leave them if I retreat and pretend nothing wrong is happening in this country,” she said.

”It is our role as truth tellers to give the people the information they need, which the government and the powerful often want to hide. I hope that when my children grow up journalists will be doing the same.”

Corrales also stressed the need for journalists to stay the course even in the face of attacks.

“We are not stenographers of events. As journalists, we give voice to the voiceless, to the victims of human rights violations. We comfort the afflicted and afflict the comfortable,” he said. – Rappler.com