At Home sa Abroad: What OFWs expect from new Department of Migrant Workers 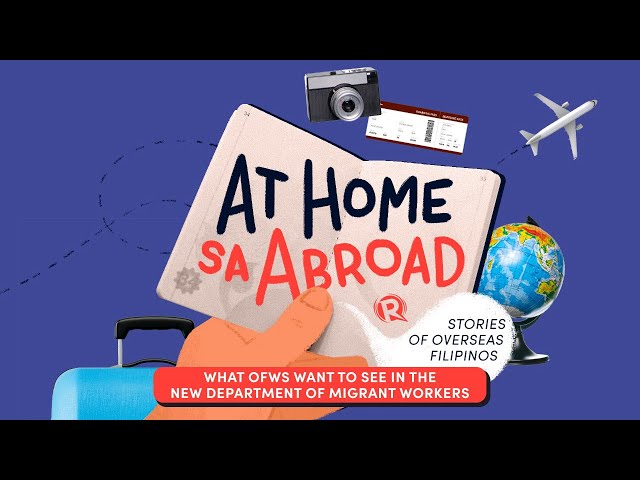 MANILA, Philippines – A few months before former president Rodrigo Duterte stepped down from office, he fulfilled a major promise to the millions of overseas Filipino workers (OFWs) – a department dedicated solely to their needs and welfare.

Before the Department of Migrant Workers (DMW) was created through a law Duterte signed in December 2021, OFWs had to run to numerous agencies and offices within the labor, foreign affairs, and social welfare departments for requirements and welfare concerns. With the new department, the government hopes to lessen time and bureaucracy in serving the “modern-day heroes.”

The passage of the new department was not without criticism. Some groups and experts were concerned that it would institutionalize labor export, while others said that merging existing offices without fixing problems within them may not spark significant improvements in serving OFWs.

When Ferdinand Marcos Jr. became president-elect, one of his early Cabinet appointments was longtime OFW advocate Susan “Toots” Ople for the post of DMW chief. Ople has laid out a number of plans that are centered on making OFWs’ lives easier when they need assistance from the government.

For the pilot episode of At Home sa Abroad: Stories of overseas Filipinos, Rappler researcher-writer Michelle Abad sits down with two Filipino community leaders – Dolores Balladares-Pelaez, chairperson of United Filipinos in Hong Kong, and Luciana Obejas, president of the Federation of Filipino Association in Amman – to talk about what OFWs want to see from the new department. Watch the video on Rappler at 7 pm, Monday, August 1.