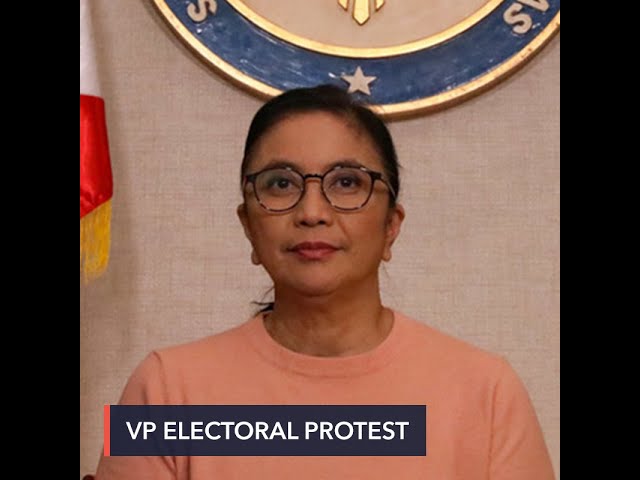 Vice President Leni Robredo’s lawyers were quick to the draw and filed a counter-manifestation before the Supreme Court, saying that all of its justices would be forced to inhibit if they were to follow the logic of the former senator Bongbong Marcos’ request.

“To follow the logic of protestant Marcos would result to an absurdity if not inhibition of most, if not all the members of the Honorable tribunal,”  the Robredo camp said in the 12-page manifestation filed on Wednesday, November 11.

Robredo’s lawyers took note of how President Rodrigo Duterte has been repeatedly saying in his speeches that he owes Marcos’ sister, Senator Imee Marcos, for supporting his presidential campaign.

If Marcos and Calida were to impute bias against Leonen just by virtue of him being an Aquino appointee with previous positions in the Aquino government, then following that same logic, the Robredo camp said all appointees of President Rodrigo Duterte must inhibit. (READ: Who voted for Duterte in the Supreme Court?)

At present, 10 of the 14 SC justices are Duterte appointees. The 15th spot in the SC is vacant, and will be filled in by Duterte’s pick.

The counter-manifestation also said that Leonen’s dissenting opinion in the Marcos burial case cannot be used as a ground for inhibition, because that would impute bias to everyone who were involved in that said decision, including Chief Justice Diosdado Peralta.

“Can we also impute the same bias against Chief Justice Peralta who was the ponente in the Resolution that allowed the burial of the remains of Ferdinand Marcos?” said the manifestation.

Even the other non-Duterte appointees like Senior Associate Justice Estela Perlas-Bernabe and Associate Justice Benjamin Caguioa would be found with a reason to inhibit if one were to follow Marcos’ reasoning, said the manifestation.

Robredo’s lawyers took note of how Marcos tried to inhibit Caguioa before because the justice’s wife is supposedly “a known ardent supporter” of the Vice President.

Again, following that logic, the Robredo camp said the faintest links to the Marcoses must also be a ground for inhibition.

Caguioa, as well as Bernabe, are both alumna of the Ateneo Law School, like Calida. Calida campaigned for Marcos in the 2016 vice presidential elections.

“The delay in the resolution of this protest can only be ascribed to the steadfast refusal of Marcos to accept the plain and simple truth – he lost not once but twice,” said Robredo’s lawyers, referring to the result of the pilot province recount where the Vice President’s lead even widened by 15,000 votes.

“The truth, no matter how difficult or bitter it might be, must be accepted,” said the manifestation.

The Supreme Court, on Tuesday, November 10, reiterated its gag order on the Marcos and Robredo camps, and issued a new stern warning that violations of sub judice would be dealt with more severely. – Rappler.com