A police officer took a photo of himself with the huge crowd which he said was larger than the February rally that officially launched the presidential candidacy of Senator Manny Pacquiao in the city.

Pacquiao, his siblings, and their relatives have considered General Santos and Sarangani as their political bailiwick, something which is being disputed by many in the city and province.

“Mas daghan kaayo ang tao karon (There are more people here now),” the policeman, who asked not to be named, told Rappler.

Initial estimates placed the crowd during Tuesday night’s rally from 5,000 to 7,000 or even more. Some traveled to the city from the Sarangani and South Cotabato provinces, and the Davao region.

It began at around 5 pm with the wife of former senator Antonio “Sonny” Trillanes IV, Arlene, speaking with a hoarse voice on behalf of her husband. Her family is from General Santos City.

Cris Lopera, one of the rally organizers, said, “There was no rain, and no mountain high enough for the people’s movement.”

It came as a surprise to many when former Sarangani Governor Miguel Rene Dominguez went on stage and introduced Robredo as “the next president of the Philippines.”

Dominguez’s father Paul is the executive director of the Asian Development Bank (ADB) who once served as presidential adviser on regional development. The former governor is also a nephew of Finance Secretary Carlos Dominguez III, a close friend and political ally of President Rodrigo Duterte.

The younger Dominguez had stayed away from politics and the limelight after he completed his third and last term as governor in 2013. He was rumored to be planning on running for Sarangani governor again this year, but he begged off, saying he just wanted to focus on his family and business. 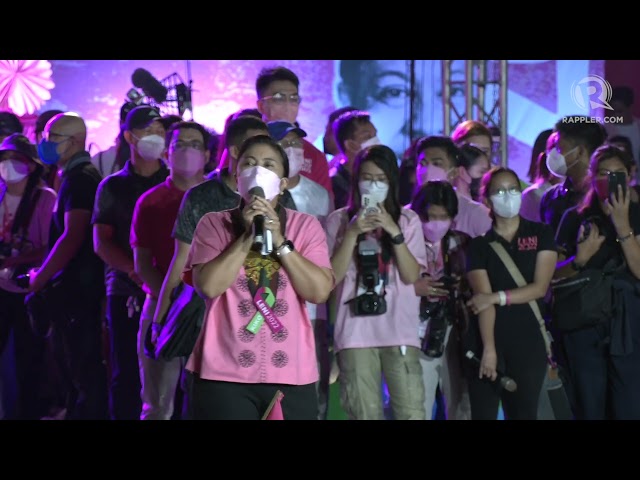