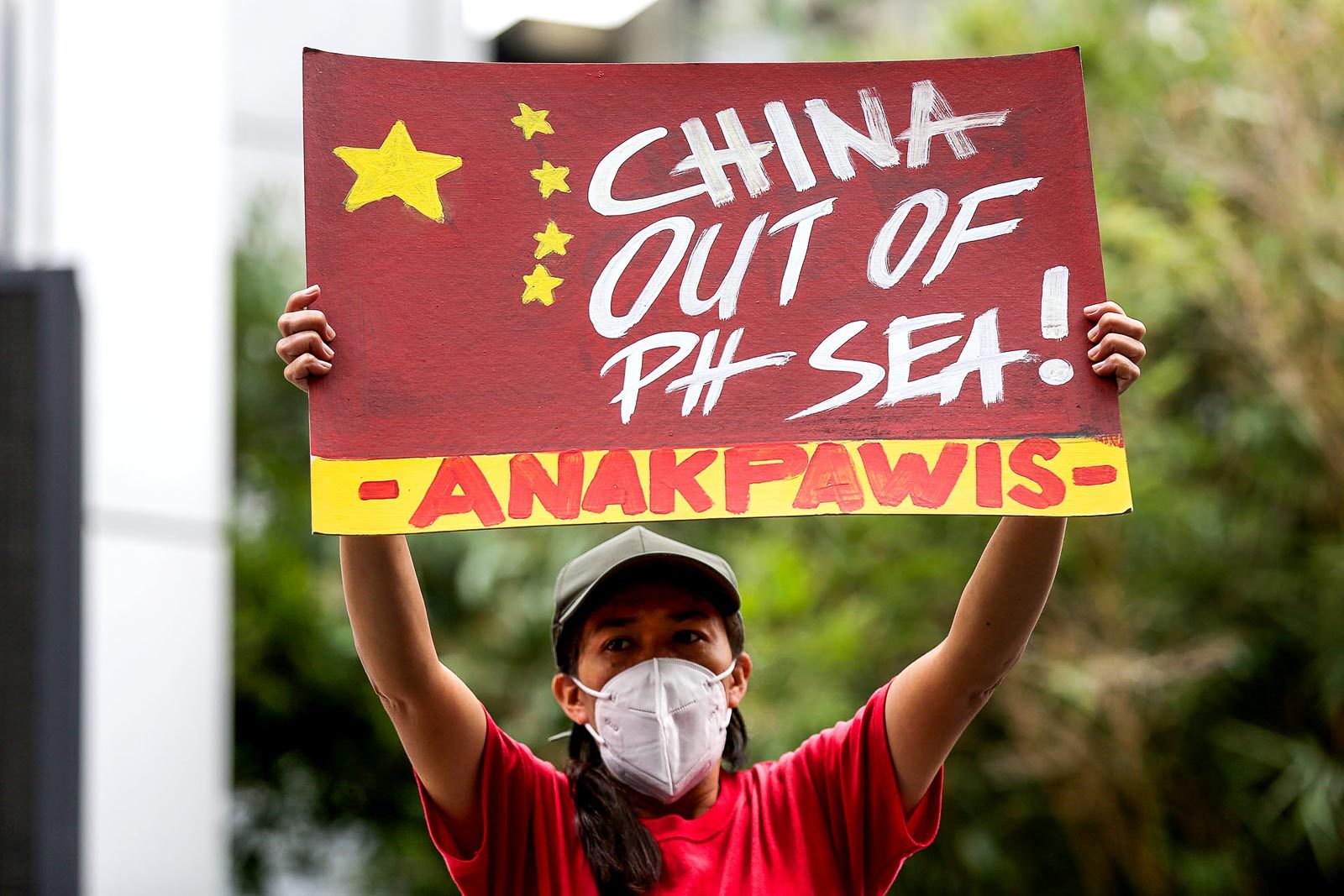 ANTI-CHINA SENTIMENT. Protesters outside the Chinese Consulate in Makati City on November 24, 2021, call on China to get out of the West Philippine Sea following a recent water cannon attack on Philippine supply boats heading to Ayungin Shoal.

MANILA, Philippines – Outgoing Philippine President Rodrigo Duterte’s decision to scrap joint oil and gas exploration with China in the West Philippine Sea provides his successor with a “clean slate” and lessons learned about dealing with the Asian power, analysts said.

The biggest winner in the three years since Duterte-led Philippines signed a joint oil development deal with China in 2018 might just be China itself. The years of talks fenced out other countries from teaming up with the Philippines to explore resources in an area Beijing claims for itself.

“That’s the lesson from these talks,” UP Institute for Maritime Affairs and Law of the Sea director Jay Batongbacal told Rappler on Monday, June 27.

Duterte’s primary goal for pursuing exploration with China was to find some way to develop petroleum and gas resources in the West Philippine Sea, so long untouched for fear of adding fuel to the maritime dispute between Manila and Beijing. Finding new energy sources has never been more critical for the Philippines, with the Ukraine-Russia war driving up oil and gas prices worldwide. (READ: ‘Oil is everything’ – Duterte’s rhetoric on West PH Sea oil exploration)

With Duterte announcing a total abandonment of talks with China, the Philippines under Ferdinand Marcos Jr., carries no baggage if it decides to pursue exploration with other countries.

Developing countries like the Philippines have typically turned to foreign investors to help explore and develop offshore oil or gas resources because of the high cost such operations entail. The Philippine Constitution requires that these operations be undertaken expressly under Philippine law, with companies serving as contractors of the government.

Foreign firms have typically formed consortiums with Philippine firms to make this happen.

Inviting countries apart from China to take part in exploration and development is the “way forward” for the Marcos government, said Dindo Manhit, president of Stratbase ADR Institute.

“Oil exploration should be a consortium of both local and foreign companies that will work within the framework of our DOE (Department of Energy) service contracting,” he told Rappler on Friday.

Duterte’s total break from joint exploration talks with China could also signal a disillusionment in what progress can be made when dealing with Beijing that refuses to recognize the West Philippine Sea as part of the Philippines’ Exclusive Economic Zone.

There had been hopes, starting in 2018 when Duterte and Chinese President Xi Jinping witnessed the signing of a memorandum of understanding on the joint exploration, that the two countries could somehow exploit the natural resources in the sea despite holding different legal views on each other’s rights to it.

But Locsin’s wording of Duterte’s instruction indicated there was nothing to hope for in those discussions.

“The President had spoken … oil and gas discussions are terminated completely. Nothing is pending; everything is over,” he had said last Thursday, June 23.

Even more telling was the outgoing foreign secretary saying the Philippine negotiators in the China talks went “as far as it is constitutionally possible to go.”

“One step forward from where we stood on the edge of the abyss is a drop into constitutional crisis,” said Locsin.

This indicates that China, in the end, would not agree to joint exploration if it meant some form of admission that the areas to be explored were under Philippine jurisdiction, an admission that would have been made by signing the version of oil and gas service contracts the Philippine Constitution requires.

“It does show the lack of a sufficient common ground for the two countries to agree on basic principles and mutually-acceptable foundations for joint development,” said Batongbacal.

“Despite the Philippines’ openness to explore joint development, China apparently insists on the former surrendering its rights and changing its legal position while China preserves its own,” he added.

Without any such agreement signed, the only apparent effect the Philippines-China talks have had was to ensure no other country pursued exploration with the Philippines in the West Philippine Sea.

Duterte’s lesson, for Marcos to learn

How these Duterte-time dealings with China played out should be considered by Marcos when he crafts his approach to Beijing in relation to the West Philippine Sea and the badly-needed natural resources it promises.

“The Marcos administration should take into consideration whatever lessons may have been learned by the Duterte government in the course of their negotiations,” said Batongbacal.

He said it’s important to note that while Duterte pushed for friendlier engagement with China, the Philippines “did not gain headway” while China is now “all the way up to controlling access to Ayungin Shoal” and deploying law enforcement against Philippine activities as close as 40 nautical miles from Luzon.

Batongbacal was referring to the incident between a China Coast Guard vessel and RV Legend, a Taiwanese ship carrying Filipino scientists authorized to conduct research in the West Philippine Sea. The Philippines’ foreign affairs department called the incident “harassment” and summoned a Chinese embassy official over it.

China has shown particular sensitivity to plans of other South China Sea claimants to develop oil and gas in the parts of the water body within their respective areas of jurisdiction.

Beijing has warned Vietnam and Indonesia in two separate occasions to stop oil drilling in seas they claim but lie within China’s illegal “Nine-dash Line.”

The dispute with China has long put a damper on the Philippines’ plans to develop offshore oil and gas resources it needs to meet domestic demand. In 2013, the late president Benigno Aquino III banned any oil exploration in the West Philippine Sea after his government sued China before an international court over its expansive maritime claims and island-building in Philippine waters.

The policy meant that the service contracts for oil resource development in the West Philippine Sea could not be pursued by the corporations that won them.

In October 2020, Duterte lifted that ban, citing the need to address the country’s energy security.

If Marcos is to pursue oil and gas exploration in the West Philippine Sea, his administration should clear the way for companies holding service contracts to push through with their operations. Part of this might entail a confrontation with China, should they aggressively oppose these activities.

“The government should prepare to provide protection for the operations of such service contractors from possible harassment and interference by Chinese Coast Guard and maritime militia forces,” said Batongbacal.

Marcos has not said if he would restore the joint exploration discussions with China. He is also yet to announce nominations to the critical posts of foreign secretary and energy secretary. – Rappler.com