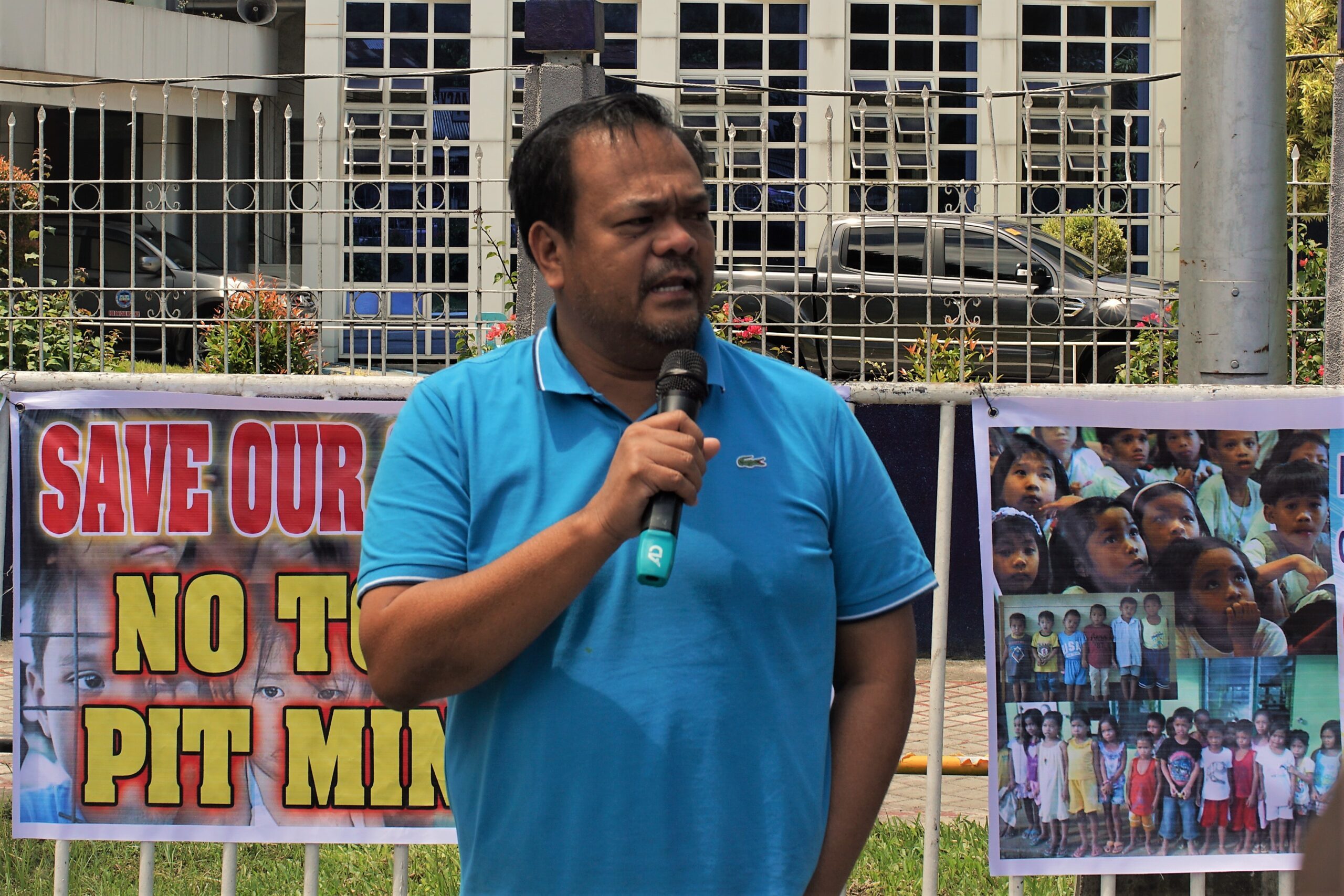 VETO. South Cotabato Governor Reynaldo Tamayo addresses groups opposed to open-pit mining during a rally outside the capitol in May 2022. Tamayo has vetoed an amended environmental code that allows open-pit mining in the province.

Tamayo’s move was met with jubilation by environmental, religious, and other groups opposed to the amendment. The groups staged rallies since May to pressure the capitol into rejecting the move to lift the province’s ban on open-pit mining.

“Thank you for bravely deciding with the people, for standing with the environment. Your veto is a testament of a listening governor,” said Marbel Catholic Bishop Cerilo Casicas of Tamayo’s veto of the May 16 amendment.

Tamayo wrote the provincial board, invoking the Local Government Code of 1991 to “veto the said ordinance for being prejudicial to the public welfare and inimical to the overall interest of all South Cotabateños.”

He also called on the provincial board not to override the veto and let the next Sangguniang Panlalawigan review the 2010 South Cotabato Environment Code.

Section 177 of the code provides that the provincial board, through its committee on environment and natural resources, allows the review of the ordinance once every 10 years.

“Time and time again, it is always stressed that the province’s holistic development is anchored first and foremost on its people,” Tamayo said.

In his letter, Tamayo said he “could not find any compelling reason why the Sangguniang Panlalawigan would amend a decade-old ordinance that ably and effectively protects the people of South Cotabato from the ill-effects of the wanton destruction of our God-given resources by the multinational corporations which will only leave the province after the extraction of our national wealth.”

Casicas said the provincial board members could “redeem themselves” by not overriding the veto.

In a statement, the environment group Alyansa Tigil Mina described the veto as “a victory of the people of South Cotabato and is the correct move of Governor Tamayo in protecting the right of his constituents to a safe ecology and promoting the comfort and welfare of a majority of the affected communities.”

Jaybee Garganera, the executive director of the group, said it would continue to monitor the actions of South Cotabato’s officials, especially the provincial board that could override Tamayo’s veto.

“We will take this matter seriously and join the vigilance of local communities in South Cotabato to continue lobbying and putting pressure on the Sanggunian to not override the veto,” read part of Alyansa Tigil Mina’s statement.

The lifting of the ban would allow the controversial $5.9-billion Tampakan copper-gold mine project to proceed. The project seeks to extract from the largest untapped copper-gold deposit in Southeast Asia and one of the world’s biggest.

The project, however, faced stiff opposition from various sectors, and religious and nongovernmental organizations, among them, Kalikasan PNE national coordinator Leon Dulce, who earlier said it will “destroy the Altayan-Taplan River ecosystems in the Quezon Mountain Range, while various coal mining projects are poised to ravage the Daguma Mt. Range.”

On Saturday, June 4, Kalikasan PNE joined calls for the provincial board “to respect the people’s will by upholding the environment code and taking action against various permits issued to the Tampakan open-pit mine despite its illegal status.”

“We urge Governor Tamayo and the provincial government to resolve to nullify any permits issued by the national government to the Tampakan mine, and to issue restraining orders against any development activities already initiated by Sagittarius Mines Incorporated and other proponents of the mine, said Dulce. – Rappler.com