4 years on: Supreme Court drug war case will be turned over to 3rd justice RETIRED. Associate Justice Edgardo Delos Santos, the 2nd justice to be in charge of the drug war case, was honored in a retirement ceremony on June 29, 2021.

Facebook Twitter Copy URL
Copied
(UPDATED) Without a resolution after Justice delos Santos retired, the 4-year-old case will be passed on to the 3rd justice in charge

Associate Justice Edgardo delos Santos, the second justice to be in charge of the petitions, retires Wednesday, June 30, without resolving the case.

Sources privy to the information confirmed to Rappler that the petitions were not on agenda on Tuesday, June 29, Delos Santos’ last en banc session. Sources added the case would be transferred to whoever would replace Delos Santos.

The Judicial and Bar Council or JBC’s deadline to apply for Delos Santos’ post is on July 16.

A separate source told Rappler that Delos Santos had circulated a draft two weeks ago and would have wanted a vote before he retired, but it ended up being deferred and not being included in the agenda on Tuesday.

The records of the case consist of hundreds of thousands of files from the police, and a draft by the ponente needs to be deliberated on. During deliberations, other justices can try to convince the ponente to espouse their views, which would require a rewrite of the draft. This process would be repeated until the en banc agrees to vote. In some cases, the final decision is written in such a way that it already addresses the dissenting opinions. 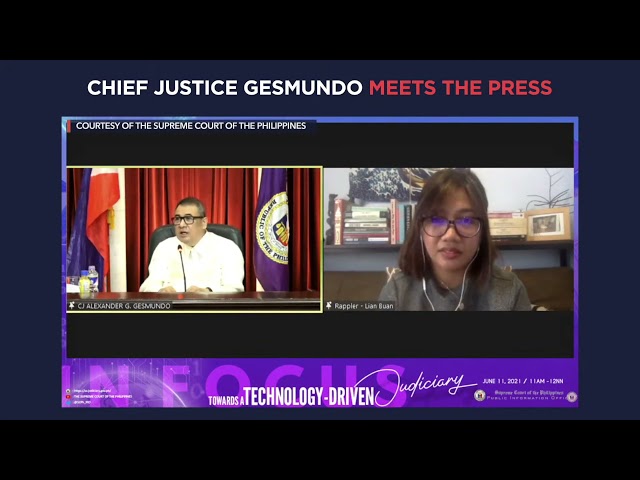 Before he retired, Delos Santos analyzed the drug war death files. The government grudgingly submitted these files after a tug-of-war with the Supreme Court, with Carpio as case lead.

“What his analysis will be is too early for me to say, until the draft ponencia and the report and recommendation is distributed to each member of the court,” Chief Justice Alexander Gesmundo had said in his rare press conference held last June 11.

Rappler obtained and investigated the first batch of documents and found that they were rubbish files, mostly unrelated to the drug war. For the documents that were drug-related, there were no records of deaths in police investigations, indicating a poorly documented centerpiece campaign.

A Supreme Court decision is seen as a possible game changer in the fight for accountability in the thousands of deaths in the drug war. But an international law expert said that even if the petitions were granted, there would still be reason for the International Criminal Court (ICC) to move along in a potential investigation.

“It’s certainly relevant but it could also signal that yes, this drug war is unconstitutional, but it still doesn’t address the question as to what steps has the Philippines taken to hold those responsible to account,” said Param-Preet Singh, associate director of the Human Rights Watch (HRW) international justice program.

During his retirement honors on Tuesday, justices paid tribute to Delos Santos’ “jurisprudential journey” but made no mention of the drug war case.

“If there is one thing I will certainly miss from the Court, the rare feeling that I experience after the contentious and at times, heated exchanges between justices,” said Delos Santos.

Delos Santos was appointed to the Supreme Court by Duterte in 2019. He is known as the “habal-habal” justice from the Visayas whose rags-to-riches story is a tale made for Maalala Mo Kaya, said Justice Jhosep Lopez, referring to the ABS-CBN hit TV show dramatizing true life stories.

Delos Santos retired only after a year-and-a-half on the Court, and one year earlier than his mandatory retirement in June 2022, making him the third justice to retire early during the pandemic.

Delos Santos was also filed with a quo warranto petition, the notorious way of ousting justices in a mode other than impeachment. This detail was revealed during JBC interviews for applicants of the Supreme Court.

“He stayed in the Supreme Court for only one-and-a-half years. Although short as it may be, it is worth a lifetime of significance and glory,” said Associate Justice Mario Lopez, mentioning the controversial prisoner humanitarian release petition that was originally assigned to Delos Santos.

The ruling, slammed as being too late and almost irrelevant because a petitioner’s baby was born and had died during the deliberation, was unattributed ruling, or what is known in the Court as a per curiam ruling.

“At the inception of his career, the country was already struck with a pandemic – the Court was not spared from this pandemic. Just as the world was uncertain which of the vaccines is most effective, the Court was also divided in what kind of relief that the petitioners should be given in that per curiam case of Almonte,” said Associate Justice Mario Lopez.

A source said that in the prisoners case, Delos Santos was also able to circulate a draft but the deliberations took a while, eventually relegating him to a separate concurring opinion.

Addressing criticisms of the delay, former chief justice Diosdado Peralta had said: “You also cannot blame the justices kasi (because) they have the right to write their own (opinions). And they followed the periods to submit their written opinions. And I cannot deprive them of that… Also they spent a lot of time preparing all these opinions. I hope they will understand the Court, that’s all that I can say.”