PCOO UNDER MARCOS. Incoming press secretary Trixie Cruz-Angeles says she and her team have been attending to transition concerns. Rappler 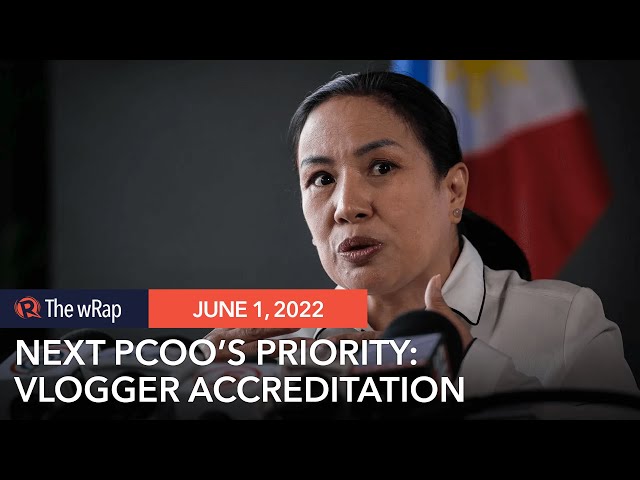 MANILA, Philippines – Like the Duterte administration, the Marcos presidency will push for the accreditation of vloggers to allow them to attend Malacañang briefings or press conferences of president-elect Ferdinand Marcos Jr.

Incoming press secretary Trixie Cruz-Angeles, herself a vlogger and blogger who supported President Rodrigo Duterte and then Marcos, said on Wednesday, June 1, that this will be a priority of the Presidential Communications Operations Office (PCOO) under her leadership.

“We are, however, pushing for the accreditation of vloggers to be invited to some of the briefings, especially those conducted by the president-elect. ‘Yon ang isa sa aming na-formulate na priority (That is one priority we have formulated) for the incoming PCOO,” she said at the Laging Handa program of state-run PTV.

However, social media personalities rarely attended the regular Malacañang briefings conducted by the presidential spokesman and press secretary with journalists, like members of the Malacañang Press Corps (MPC), the private association of reporters assigned to cover the Office of the President and its attached agencies.

In a Senate hearing in 2017, Angeles, then a PCOO consultant as a social media strategist, said she helped Uson with her social media posts, which Uson denied in the same hearing.

NUJP: How will vloggers be held accountable?

The National Union of Journalists of the Philippines (NUJP) said that while granting access to vloggers is “commendable in principle,” it should not lead to a shrinking space for journalists.

“Wider access is good, but must not be at the expense of institutional media, which has been sidelined during the campaign as false information spread rapidly online, many of which have been traced to the same network,” the group said in a statement.

NUJP noted that it’s pro-Marcos bloggers who would most likely benefit from the proposed set-up, if the events of Marcos’ 2022 presidential campaign are an indication. Vloggers were often given better access to then-presidential candidate Marcos than members of institutional media.

The group also raised the issue of how vloggers would be held accountable for their content. Journalists, in contrast, are answerable to their editors and newsrooms for their news reports and are also bound by media code of ethics.

“Will the PCOO, which will essentially vouch for the vloggers and influencers it accredits, also be accountable for the content that they might release? Would vlogger access be dependent on whether the content is favorable to the incoming administration or not?” asked NUJP.

NUJP said it would be watching out for any policy “that may lead to discrediting the media.”

Angeles was asked by Rappler, through Laging Handa’s anchor Audrey Gorriceta, if the PCOO under her watch would allow all journalists and media groups to physically cover presidential events.

“I think we’ll have to look at the existing policies first and determine, make a decision later on as to how appropriate they are for the current times,” she said in response.

Duterte had banned Rappler reporters from covering his official events since 2018, claiming this was justified by the Securities and Exchange Commission’s decision to revoke Rappler’s license to operate.

However, there is no law that states a media group requires SEC registration to be treated as journalists. SEC registration is only a requirement for membership into MPC. But MPC had issued a statement way back in 2018 standing by Rappler’s membership in the group until the Court of Appeals upholds the SEC decision as final.

Though the SEC affirmed its decision to revoke Rappler’s license, the CA has not ruled it executory as Rappler continues to operate, both as a corporate entity and as a media outlet.

Also, many other reporters are allowed to cover presidential events even though they are not MPC members. This is especially true for events held outside Malacañang or those hosted by private groups. Rappler has challenged the Duterte coverage ban before the Supreme Court. – Rappler.com